Coronavirus fatalities in French hospitals rise by 541 to 7,632 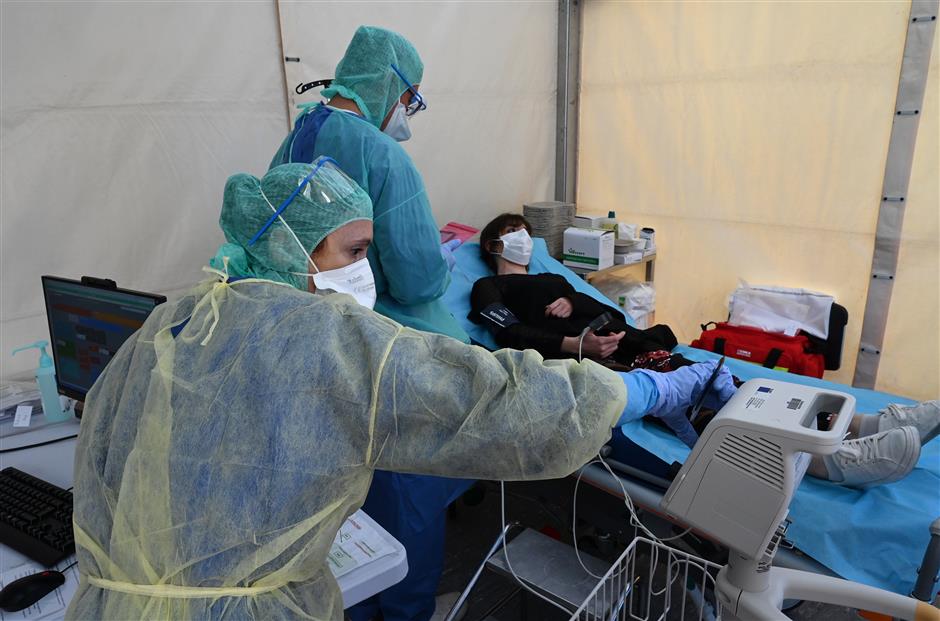 A woman is examined by a doctor at an advanced COVID-19 medical station at the Saint Roch hospital, which houses a COVID-19 testing centre, in Montpellier, southern France, on April 8, 2020.

The coronavirus pandemic continued its rampage in France with 541 additional deaths in hospitals in the last 24 hours, bringing the toll in sanitary establishments to 7,632, Director General of Health Jerome Salomon said on Wednesday.

Due to technical problems, health authorities were unable to update human losses registered in care establishments for the elderly on Wednesday, maintaining the count at 3,237, he added.

It means that the total official toll from the coronavirus now stands at 10,869, and it is likely incomplete. France reported its first COVID-19 death, an 80-year-old tourist from China, on February 14.

Salomon also said at the daily conference that there were now 7,148 people in intensive care, an increase of 17 from the day earlier, the lowest daily increase recorded in weeks, which offered the French health system a much-needed relief.

Since the start of the epidemic, the number of people who have recovered is increasing every day, the official noted. In total, 21,254 patients in France have recovered.

"Tension is barely easing in some regions, but remains very strong in others, such as (the north-central French region of) Ile-de-France," Salomon said, warning that "COVID-19 pandemic is still very active."

"Staying at home is acting against the virus," he added, calling confinement as "the most efficient weapon against the spread of the virus."

"You are the major actors in this fight. All together we have slowed down this deadly pandemic, and we will curb it further," he stressed.

France decided on March 17 to put its 67 million residents into lockdown to curb the spread of the virus. The measures have been extended until April 15.

On Wednesday evening, the French presidency announced that the confinement will be extended again and President Emmanuel Macron will address the nation next Monday to declare further measures to fight the coronavirus.