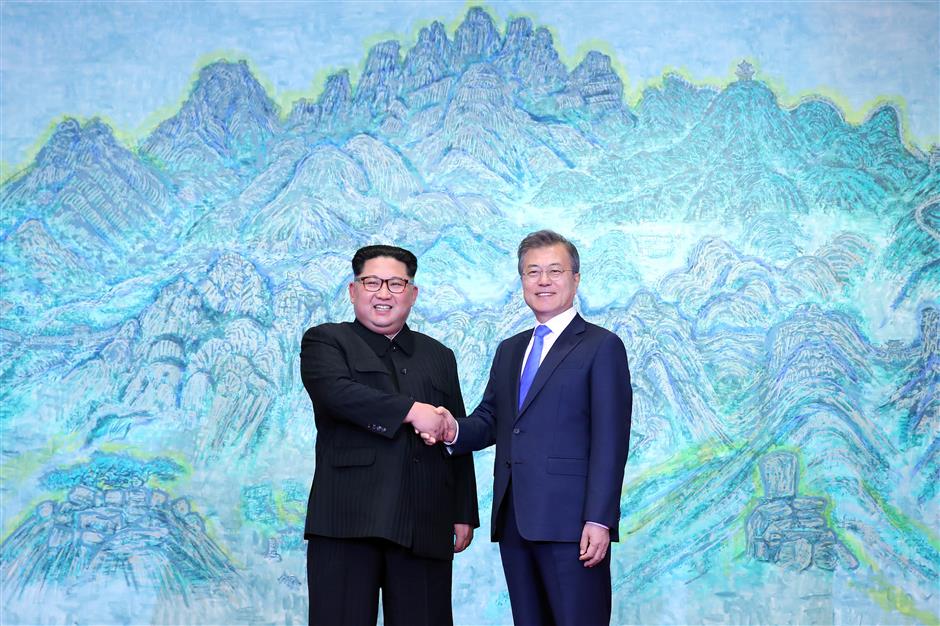 South Korea's President Moon Jae-in (right) shakes hands with DPRK leader Kim Jong Un during the Inter-Korean summit in the Peace House building on the southern side of the truce village of Panmunjom on April 27, 2018.

The formal talks lasted for over an hour and a half in the morning at the Peace House, on the South Korean side of Panmunjom which has divided the Korean Peninsula since the end of the 1950-53 Korean War.

Before the formal talks, Moon stood right in front of the military demarcation line (MDL) to greet Kim who appeared from a DPRK building at Moon's opposite side.

Moon briefly crossed over to the DPRK side as Kim suggested after Moon expressed hope that he can once set foot on the DPRK territory as the South Korean president, according to Moon's press secretary.

It was an unscheduled event for the official welcoming ceremony which included the inspection of an honor guard.

While Moon and Kim were being escorted by a traditional South Korean honor guard to the Panmunjom square on the South Korean side, Moon told Kim that if the DPRK leader visits the presidential compound in Seoul, he could witness a more elaborate welcoming affair. Kim replied to Moon that he would accept an invitation to visit the Blue House.

During a chat at the Peace House reception room before the formal talks, Kim said expectations ran high for his meeting with Moon at the place symbolizing confrontation between the two sides, noting the border line could be rubbed out if enough people walk over it.

Moon agreed, saying he wished to make the Panmunjom summit a starting point that will lead to summits in Pyongyang, Seoul, South Korea's southern resort island of Jeju and the DPRK's northeastern mountain of Paektu.

The South Korean president said he hoped to climb Mount Paektu via the DPRK route. Kim said he would welcome such a visit.

After the formal talks, Kim returned to the DPRK side of Panmunjom for a lunch break. The second round of formal talks between the two will take place in the afternoon, followed by a banquet.