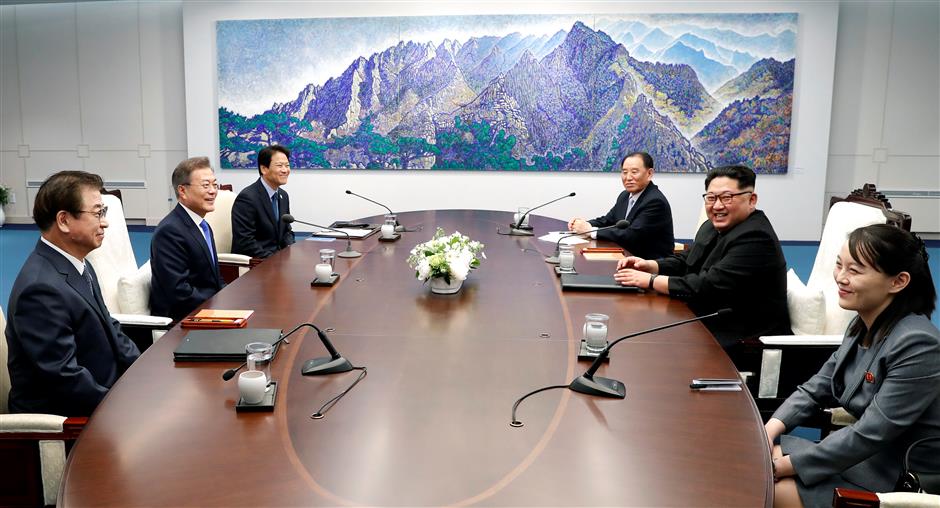 South Korea's President Moon Jae-in (second left) attends the Inter-Korean summit with DPRK leader Kim Jong Un (second right) and his sister Kim Yo Jong (right) in the Peace House building on the southern side of the truce village of Panmunjom on April 27, 2018.

Leaders of South Korea and the Democratic People's Republic of Korea discussed denuclearization on the Korean Peninsula, the establishment of a permanent peace pact and the improvement of inter-Korean ties, South Korea's Blue House said on Friday.

South Korean President Moon Jae-in and top DPRK leader Kim Jong Un sincerely and candidly talked about the issues during their formal closed-door dialogue, which lasted for about 100 minutes, Yoon Young-chan, senior press secretary for Moon, told a press briefing at the border village of Panmunjom.

Working-level officials from the two sides have been working to reach an agreement on the joint declaration of the Moon-Kim summit.

After the first session of their talks, Kim returned to the DPRK side of Panmunjom for a lunch break. The second session will be resumed in the afternoon, with a welcoming banquet included in the list of official events.

Ri Sol Ju, Kim's wife, is slated to arrive in Panmunjom at around 6:15pm local time to attend the state banquet, hosted by Moon and his spouse Kim Jung-sook, according to the joint press corps.

Kim became the first DPRK leader to step onto South Korean soil after the end of the 1950-1953 Korean War.

Before the start of the formal talks, Moon stood right in front of the military demarcation line to greet Kim who appeared from a DPRK building in Moon's opposite side.

The episode was suggested by Kim following Moon's expressed desire to set foot on DPRK territory as the South Korean president, according to Moon's press secretary.

It was an unscheduled event for the official welcoming ceremony, included an inspection of the honor guard.

While Moon and Kim were being escorted by a traditional South Korean honor guard to Panmunjom square on the South Korean side, Moon told Kim that if the DPRK leader visits the presidential compound in Seoul, he could receive a more impressive welcome. Kim replied that he would accept an invitation to the Blue House.

During a chat at the Peace House reception room before the formal talks, Kim said expectations ran high for his meeting with Moon at the place symbolizing the confrontation of the two sides, noting the border line could be rubbed out if enough people walk over it.

Moon agreed, saying he wished to make the Panmunjom summit a starting point that will lead to summits in Pyongyang, Seoul, South Korea's southern resort island of Jeju and the DPRK's northeastern Mount Paektu.

Moon said he would like to visit Mount Paektu, something Kim welcomed.

Moon said the most important thing in resolving issues on the Korean Peninsula is speed. In response, Kim proposed to meet more frequently to meet the world's high expectations of peace on the peninsula.