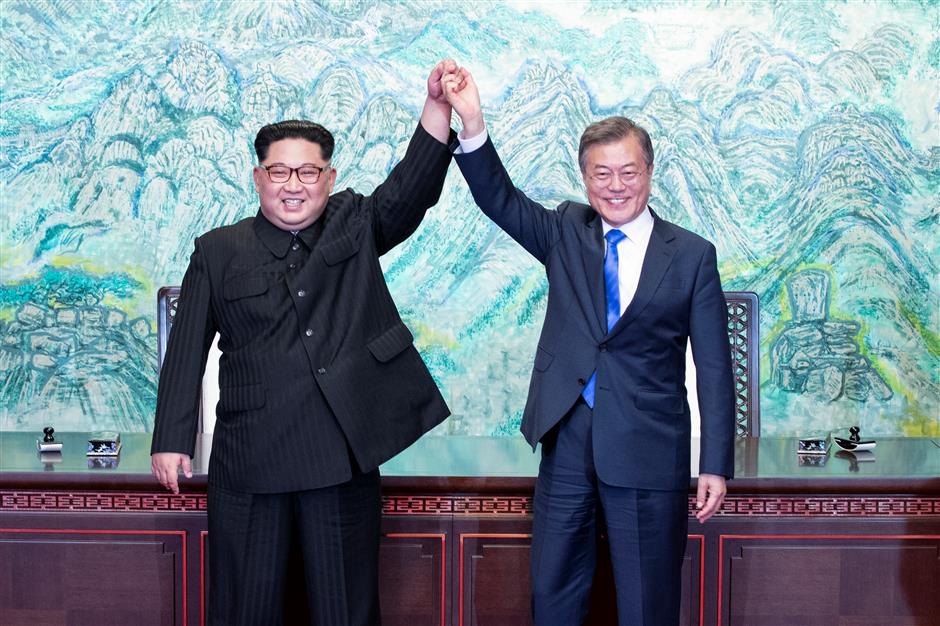 DPRK leader Kim Jong Un (L) and South Korea's President Moon Jae-in (R) raise their jointed hands during a signing ceremony near the end of their historic summit at the border village of Panmunjom on April 27, 2018.

South Korean President Moon Jae-in and Kim Jong Un, top leader of the Democratic People's Republic of Korea, confirmed a common goal of complete denuclearization and agreed to push for multilateral talks to turn the current armistice agreement into a peace treaty after their first-ever summit meeting at the border village of Panmunjom on Friday.

Moon and Kim held a signing ceremony for their joint declaration, titled the Panmunjom Declaration for Peace, Prosperity and Unification of the Korean Peninsula, at Peace House on the South Korean side of Panmunjom that has divided the rival Koreas since the end of the 1950-53 Korean War.

The leaders confirmed their common goal of realizing a nuclear-free Korean Peninsula via complete denuclearization.

They agreed to actively push for talks, involving South Korea, the DPRK, China and the United States, to establish a permanent, firm peace regime with a view to declaring an end to the Korean War and turning the armistice agreement into a peace treaty this year, marking the 65th anniversary of the signing of the armistice agreement.

Ending the current abnormal armistice and establishing a firm peace regime on the peninsula is a historical mission that cannot be delayed any more, the joint declaration said.

Kim walked across the military demarcation line into South Korea, becoming the first DPRK leader to set foot on South Korean soil since the Korean War ended with the armistice.

After the signing ceremony, Moon and Kim hugged each other and smiled broadly, heralding a new era of peace on the peninsula.

The Panmunjom Declaration is composed of three main themes: the establishment of a peace regime, efforts to ease military tensions, and co-prosperity and unification of the two Koreas.