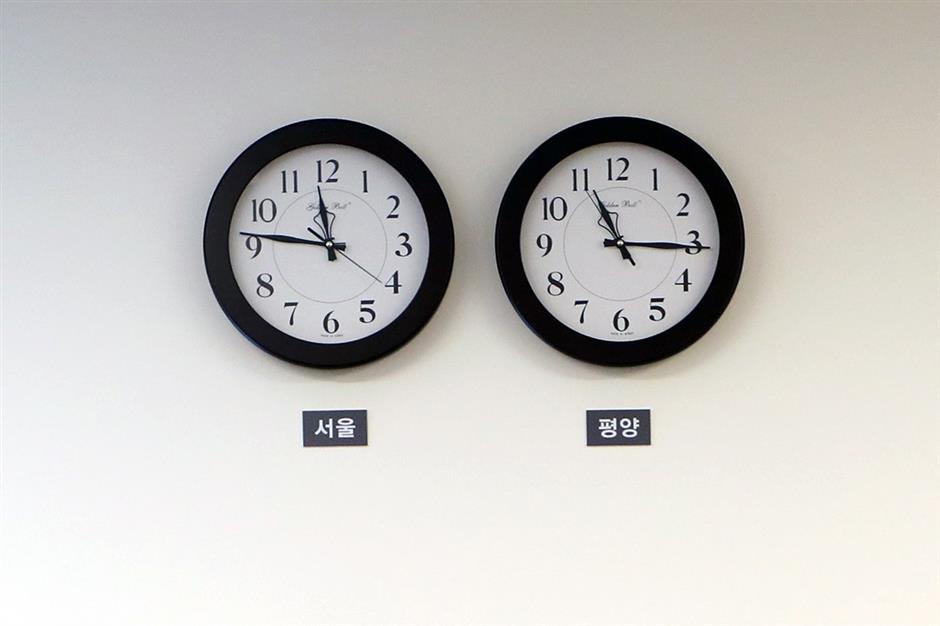 A handout made available by the South Korean Presidential Office Cheong Wa Dae shows Seoul time zone clock (L) and Pyongyang time zone clock (R) at the Peace House on the Demilitarized Zone in the border village of Panmunjom in Paju, South Korea, on April 25, 2018.

The Democratic People's Republic of Korea will reset Pyongyang time to GMT+09:00, 30 minutes earlier than the present time, starting from May 5, the Korean Central News Agency reported on Monday.

The Presidium of the Supreme People's Assembly of the DPRK adopted a decree "On Resetting Pyongyang Time" to "unify the times of the north and the south," the KCNA said.

The decree urged the cabinet and relevant organs to take steps to implement it, the report added.

During his summit meeting with South Korean President Moon Jae-in at Panmunjom on Friday, DPRK top leader Kim Jong Un proposed unifying the times of the north and the south before doing anything else, saying, "It was a painful wrench to see two clocks indicating Pyongyang and Seoul times hanging on a wall of the summit venue."

The move is "the first practical step for national reconciliation and unity", the KCNA quoted Kim as saying. "It is ... a process in which the north and the south turn their different and separated things into the same and single ones."

Previously, the two Koreas used an identical standard time. But in August 2015, when inter-Korean relations deteriorated, the DPRK pushed back its standard time by 30 minutes.