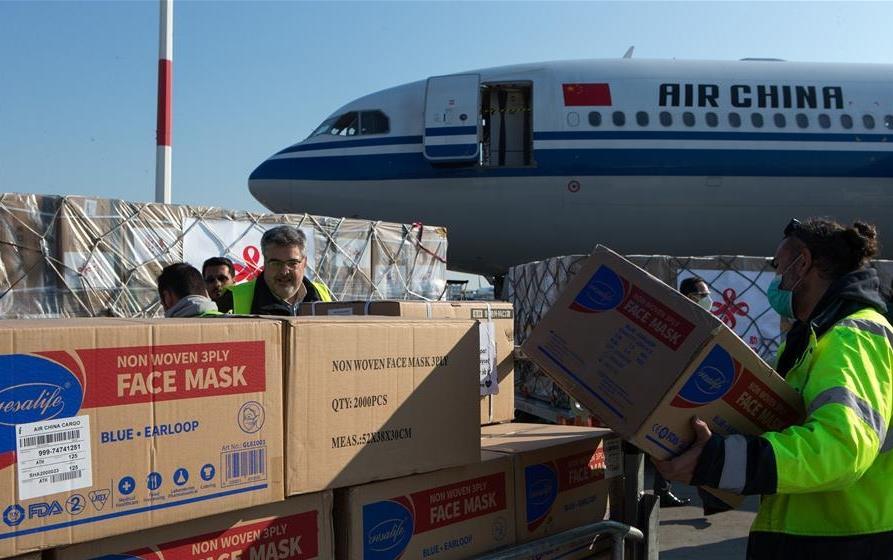 Airport staff unload boxes of face masks and medical supplies from an airplane of Air China, in Athens, Greece, on March 21, 2020. Approximately eight tons of medical supplies provided by the Chinese government to Greece after Athens' urgent request arrived on Saturday morning at Athens international airport on an Air China flight.The aid consists of 550,000 masks and sets of protective gear, according to a release issued by the Chinese embassy in Greece.

Approximately eight tons of medical supplies provided by the Chinese government to Greece after Athens' urgent request arrived on Saturday morning at Athens international airport on an Air China flight.

The aid consists of 550,000 masks and sets of protective gear, according to a release issued by the Chinese embassy in Greece. Many other aid packages weighing around 10 tons, donated by Chinese enterprises and organizations, arrived on the same flight.

The supplies were collected and sent to Greece within eight days, at a time when China is still under immense pressure to contain the epidemic and medical materials are still in short supply, Chinese Ambassador to Greece Zhang Qiyue said at a handover ceremony with Greek Health Minister Vasilis Kikilias on the tarmac of Eleftherios Venizelos airport.

Quoting ancient Greek philosopher Aristotle's words, "What is a friend? A friend means the single soul dwelling in two bodies," Zhang added that China and Greece have been working closely together in the fight against COVID-19, showing evidence of the deep friendship between the two nations.

"Now, when the situation in China is getting a little bit better, we are doing our very best to assist the Greek people in combating this. We believe in solidarity, we believe in cooperation. We think that solidarity and cooperation are the best weapon to combat this virus," Zhang added.

"We are deeply honored and grateful, and we hope that you will continue to show these sentiments of help and support to the Greek people," Kikilias said.

Following the handover event, Zhang told Xinhua that "the epidemic in Greece is getting more and more serious ... China and Greece are very excellent friends and partners, so we are doing everything we can to help."

Greek State Minister Giorgos Gerapetritis, Environment and Energy minister Kostis Hatzidakis and Alternate Foreign Minister on European Affairs Miltiadis Varvitsiotis were also present at the event, according to a statement from the Greek Health Ministry.

Earlier this week, Kikilias visited the Chinese embassy in Athens, where Zhang handed over to him 50,000 face masks donated by the Chinese community in Greece.

As of Friday night, Greece has registered 10 deaths from the epidemic, according to reports from the country's national news agency. Earlier, the Greek Health Ministry reported 495 confirmed COVID-19 cases nationwide.