US owes an explanation to world around vaccine development 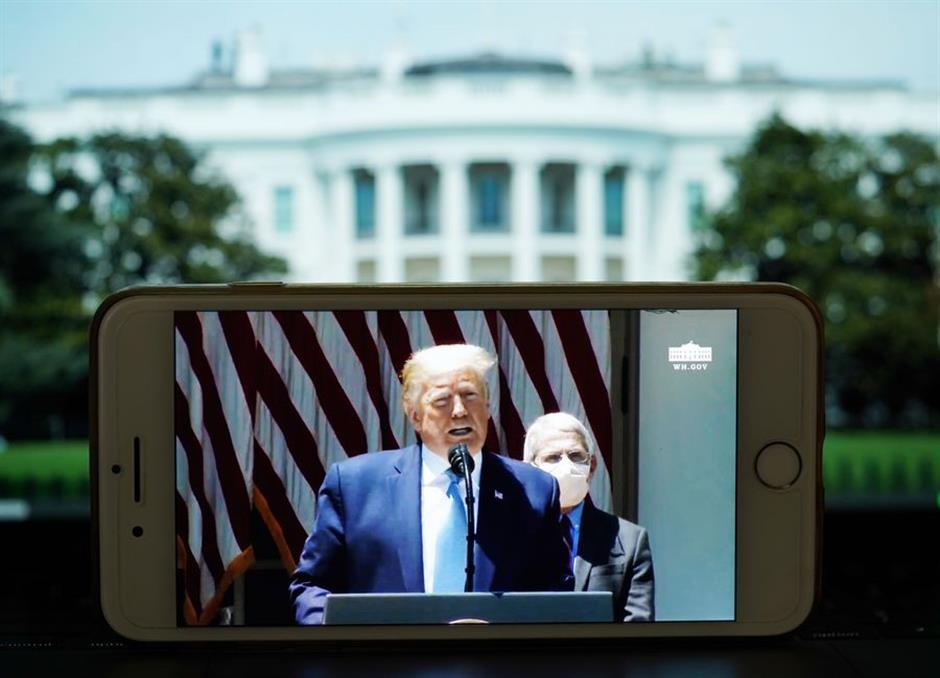 Photo taken on May 15, 2020 shows the live broadcast of US President Donald Trump speaking at a press briefing at the White House in Washington DC, the United States.

US President Donald Trump's inconsistency in his words and deeds really makes people wonder what the US has been hiding from the world?

At a recent White House news briefing, Trump revealed that the US started to develop the first COVID-19 vaccine candidate on January 11, "within hours of the virus's genetic code being posted online."

While he boasts about the speed of vaccine development, people have to wonder why the US now has the world's largest number of confirmed COVID-19 cases if he knew from the very beginning the severity of the virus?

An American netizen named "David Tam" wrote on twitter: "So he IS SAYING he knew January 11...and DIDN'T act for TWO MONTHS???"

Trump did not take the virus seriously until he declared a national emergency on March 13 to open up US$50 billion in federal aid to help combat the spread across the country.

A netizen named "Bionca-Lori" demanded White House press secretary Kayleigh McEnany to explain: "how scientist(s) were working on vaccines on January 11, 2020 which requires specific information from China to do yet you claim China was hiding the information, then when you had Chinese Diplomats at White House January 15, 2020, you didn't ask anything."

If the US vaccine development did not rely on data and information from China, then can the US make public their source?

The date of January 11 is much earlier than the one when the US reported its first confirmed COVID-19 case.

People may well think coronavirus had already existed in the US before it was found in China.

A Business Insider article titled "The US probably had the coronavirus in December, but was too busy watching China to notice" suggested the coronavirus may have spread to the US as early as December 2019.

According to US media reports, Belleville Mayor Michael Melham tested positive for COVID-19 antibodies and believes he contracted the virus in November.

Did the coronavirus exist in US earlier than people made to believe? Did Trump and his administration know about the virus before it broke out?

People have the right to ask such questions. And will the US offer an explanation to the world?