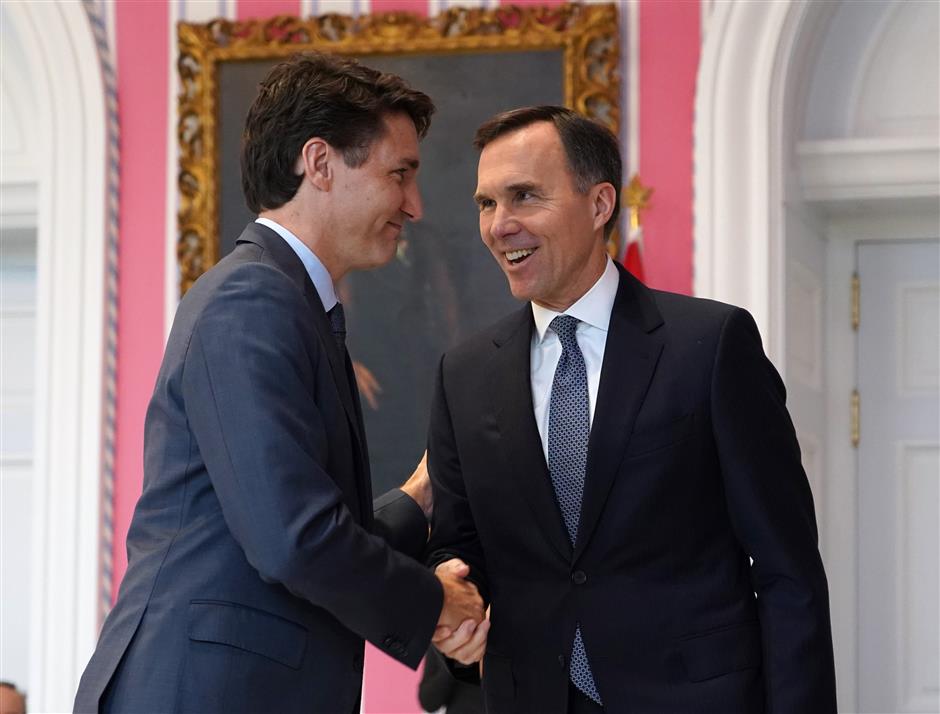 In this file photo taken on November 20, 2019, Canadian Prime Minister Justin Trudeau (left) shakes hands with Minister of Finance Bill Morneau during a ceremony at Rideau Hall in Ottawa.

Canadian Prime Minister Justin Trudeau will give much-anticipated testimony this week over his role in awarding a government contract to a charity that paid members of his family large sums of money, the House of Commons said on Monday.

Trudeau, who is at the center of an ethics investigation into the controversy, will testify for an hour on Thursday at 3pm (7pm GMT) before the House of Commons Finance Committee.

This is an exceptional move for a head of government, and will likely be an eventful session for Trudeau.

Last week, the two main opposition parties called for the resignation of Trudeau, who leads a minority government.

Ethics commissioner Mario Dion, an independent officer of parliament, opened an investigation into Trudeau and Finance Minister Bill Morneau after the former's Liberal government awarded a major contract to WE Charity to manage a student scholarship program worth C$900 million (US$662 million), despite ties between the organization and the two officials' families.

The group has since said it is withdrawing from the federal program, but the controversy has continued to rage. WE Charity could have received more than C$40 million to manage the program, according to Canadian media.

WE Charity has admitted paying nearly C$300,000 to Trudeau's mother, brother and wife for speaking engagements over the past few years.

Trudeau's wife would have received C$1,500 for an event in 2012, before her husband had become the head of the Liberal Party.

Both Trudeau and Morneau have apologized for not recusing themselves from the negotiations on the contract awarded to WE Charity.

Two of Morneau's daughters were associated with the charity, one of them as an employee.

Last week, Morneau drew further backlash from the opposition when he said he had reimbursed WE Charity for more than C$41,000 in travel expenses related to two humanitarian trips he and his family took in 2017.

Morneau made the announcement last Wednesday while testifying before the same committee that will hear Trudeau on Thursday. The finance minister said he had sent the check that very morning.

Unconvinced by his testimony and surprised that he had paid WE Charity back for the trips just hours before his appearance before the House of Commons, opposition Conservatives immediately called for his resignation.

Trudeau has run afoul of the ethics commissioner on two previous occasions since 2017 for conflict of interest violations.