Londoners protest tougher lockdown due to second wave of COVID-19 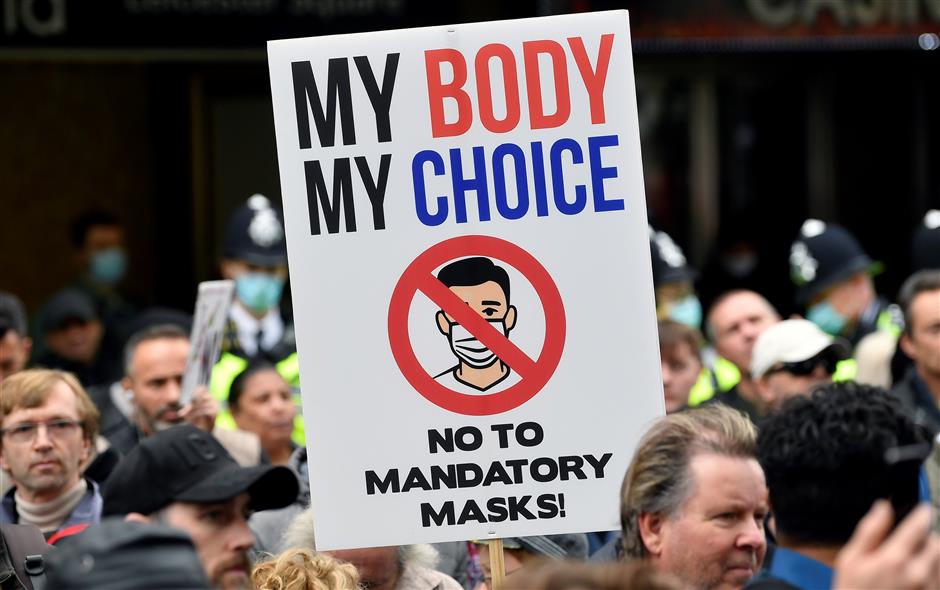 Anti-lockdown protesters take part in a demonstration in London on Saturday as the second wave of coronavirus infections is engulfing the United Kingdom.

As a second wave of infections gathers pace, Prime Minister Boris Johnson’s government has stepped up local restrictions in parts of England where cases are surging — hoping to shield the economy by allowing the least-affected regions to remain open.

As of midnight, London was moved up to the “tier-2” or “high-risk” level. This bans people from meeting anybody outside their household or “support bubble” — including friends or relatives who help to care for children — in any indoor setting.

The rules also forbid more than six people to meet outdoors, though the police chose not to enforce them as several thousand anti-lockdown campaigners marched down Oxford Street, one of the world’s busiest shopping streets in normal times.

The protesters view COVID-19 restrictions as unnecessary and a breach of their human rights. Some oppose mask-wearing and vaccinations.

Some carried placards saying: “MY BODY MY CHOICE, NO TO MANDATORY MASKS.”

“There’s plenty of things that can kill you, you know, it could happen any day,” said protester Aragorn Kyley, 17.

“It’s about living, not just surviving.”

As of Saturday, 57 percent of the UK population was living under tighter COVID-19 restrictions.

Scientists from the SAGE group that advises the government, and the main opposition Labour Party, want a short nationwide lockdown.

Former British Prime Minister Tony Blair has been accused of breaking UK COVID-19 restrictions after failing to self-isolate for two weeks following a two-day trip to the United States, the Sunday Telegraph reported.

The newspaper said it had obtained pictures showing Blair, prime minister from 1997 to 2007, leaving a London restaurant 10 days after his return from Washington last month. The Sunday Telegraph said it understood that Blair appealed to Whitehall officials for special dispensation from the COVID-19 rules, but that he was not issued with the formal exemption letter needed to avoid a 14-day isolation.

Blair was in Washington for a White House ceremony at which Israel signed agreements establishing formal relations with Bahrain and the United Arab Emirates.

A Blair spokesman said he was invited by the US because of the role he played in the deal.

The spokesman also insisted Blair “posed no risk to anyone” as he was tested before his departure, on arrival at the White House, and again several times since returning to the UK.

Several major figures have been accused of damaging public confidence in the UK government’s coronavirus response by breaking or appearing to break rules.