Waste not, want not: All across Asia, cities find new ways to deal with garbage 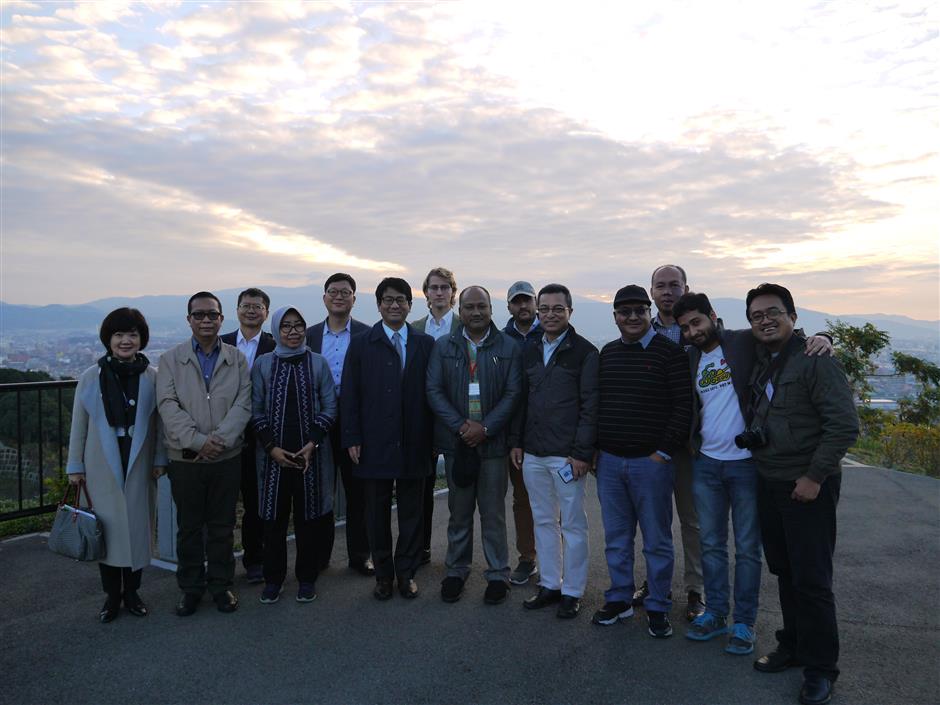 UN-Habitat employees and journalists from Asia pose at the top of the landfill at Greenhill Madoka, which commands a cycloramic view of Fukuoka, Japan.

Environmental experts and journalists from Asia recently aired their views about best practices in solid waste management and shared their insights into the localization of sustainable development goals (SDGs) at a forum in Fukuoka, Japan.

The November 27-28 forum was organized by the United Nations Human Settlements Programme (UN-Habitat) Regional Office for Asia and the Pacific and the Nishinippon Shimbun newspaper, and consisted of an environmental technology expert group meeting, and the 12th Asian City Journalists Conference.

The first was the Southern Fukuoka Region Facility, known also as Clean Ene-Park Nanbu, in Kasuga, Fukuoka, which covers 92,000 square meters and is able to process the combustible waste created by the roughly 600,000 residents in the southern metropolitan Fukuoka region.

Completed in March 2016, the facility expects to operate until March 2041.

There, trucks are automatically weighed, logged and managed to ascertain the net weight of waste carried into the facility. The waste is then emptied into a large pit, at a platform where air curtains are in place to prevent odor from escaping to the outside. Bulky combustible waste like furniture and tatami mats are crushed by two rotating blades, and a waste hopper feeds the waste into a stoker incinerator, where the interior temperature can reach 900 degrees Celsius. The energy produced powers a steam turbine, and the electricity generated can power onsite equipment and lighting, or could be sold to the grid.

I noticed the facility brochures include an access map and directions on how to get to the site by train and car — all useful information as the facility also serves as an educational center, where residents and students alike can learn how waste is processed, monitor real-time exhaust gas composition, or be warned of the consequence when hazardous items get mixed up in waste. They can also learn that, even after being reduced to ash, the waste continues to be a menace — the ash might sit in the landfill for years before being assessed for reuse.

As this is an open landfill, to prevent rainwater from seeping into the soil, pipes and a seeping–water treatment facility are in place. Similarly, residents can walk up the steps to the top of the hill, where they can, while being inevitably awed by the size of the pit, enjoy a cycloramic view of the city.

This deceptively simple landfill functions on the semi-aerobic principle, whereby the heat generated by microbial degradation of waste raises the temperature in the landfill, giving rise to thermal convection. This mechanism, by eliminating the need for air-blowing equipment, makes landfill maintenance and management easier.

According to Yasushi Matsufuji, professor emeritus at Fukuoka University, this semi-aerobic concept, discovered through an aerobic landfill experiment, is actually central to what he describes as “Fukuoka Method” (FM) which has been distinguished by its low cost, low pollution, and low methane emissions. Thus a landfill ceases to be just a dumping area, but becomes a place where waste gets treated. There have also been local examples of landfills being turned into parks or schools. 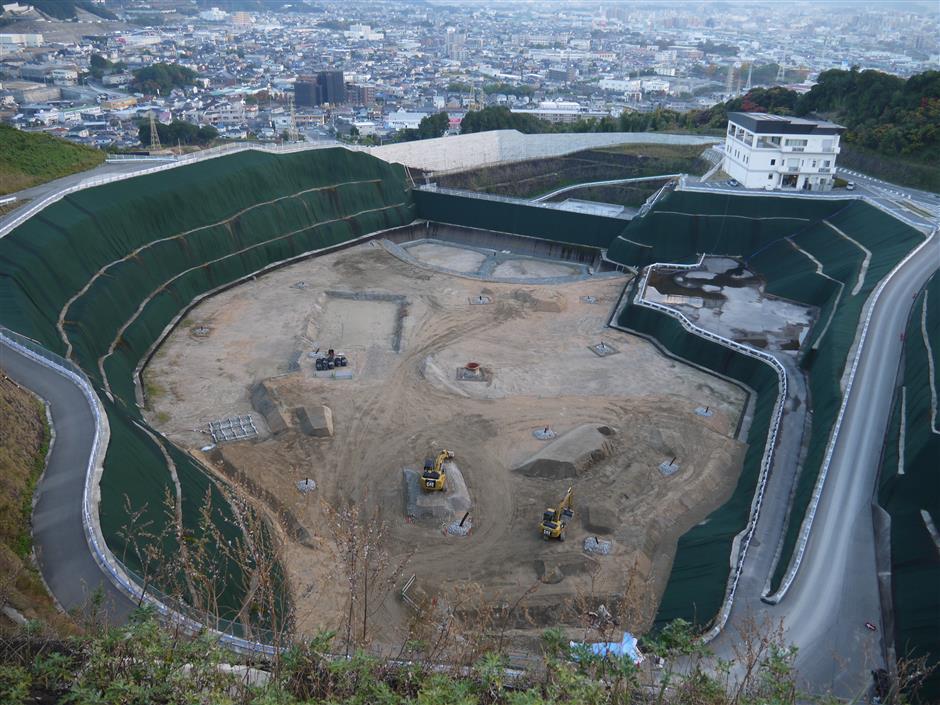 The landfill at Greenhill Madoka

Matsufuji said this method has been involved in technology transfers to some developing countries in dozens of projects, among which is a collaborative effort between Fukuoka and the Tsinghua University since 2003, in which a landfill in Mengzi, Yunnan Province, has been renovated following the FM principle.

Significantly, Matsufuji likened a FM-based landfill to a human body, where activated cover soil is like the liver, lime is like the kidney, and leachate collection pipes are like blood vessels.

Thanks to the interplay of detoxification, filtering, re-circulation, and pressure, such landfills can succeed in self-cleansing and purification. The professor added that the only exception seems to be the absence of a “brain” in a landfill, but predicted that a brain might be added in the future.

During the forum, officials from a select countries in Asia also introduced solid waste management practice in their own countries.

Mukhtar Ahmad Shahir, sanitation officer at the Sanitation Department of Kabul, Afghanistan, briefed on the situation in Kabul, which is being rapidly urbanized (with a population of 6 million). At an elevation of 1,790 meters, it is also one of the highest capitals in the world. According to UN-Habitat, less than half of solid waste in Kabul is collected. Since 2017, the city has launched a Clean and Green Cities drive, which stresses solid waste collection from households, tree planting, street sweeping and cleaning up of roadside ditches.

Windiasti Kartika Abdurrahman, head of the Regional Development Division, Regional Planning Agency of the city of Banjarmasin, Indonesia, gave an overview of challenges confronting her city in south Kalimantan — the Indonesian part of Borneo.

She pointed to the benefit of community-based waste reduction, as suggested by chopping and composting houses. The 234 waste banks, operated by volunteers and distributed throughout the city, also significantly reduce the waste. Problems there include insufficient funding and low public awareness about the environment. Significantly, the use of plastic is still very high there.

Experts from the Fukuoka Environmental Bureau shared the city’s vision in pushing for a sustainable society. The city introduced paid garbage bags in 2005, and there appeared to be some features in the city’s waste treatment practice in addition to the Fukuoka Method. These include an emphasis on 3Rs (reduce, reuse, and recycle), and night collection (benefits include higher efficiency, as there is less traffic during the night, the avoidance of littering by crows, as well as the invisibility of garbage bags during the day). There is yet another advantage: The night operation is conducive to making safer neighborhood.

The emphasis on 3Rs in the city is insightful. In “reduce,” there is promotion of “bring your own shopping bags” so as to reduce the use of plastics. In 2017, 120,000 people visited the city’s 3R stations, which received used books, clothing and other household goods.

In “recycling,” the 36,000 tons of recyclable waste collected in 2017 resulted in a reduction of total waste by 11 percent.

In spite of the considerable migrant population in Fukuoka, the city is trying to raise its waste sorting categories from the current four to nine in the future.

Special Reports
﻿
Reflections on China's effective containment tactic
Living under the shadows of two pandemics
Amid times of uncertainty, app preserves messages of hope and happiness
Vlog: Is Shanghai really getting back to normal?
Vlog: How does quarantine in Shanghai compare with New Zealand?
Inconvenient truth about the missed opportunity
The West's long learning curve in mitigating pandemic's economic impact
China success in containment of COVID-19 valuable
A simple way to keep COVID-19 economy working
A financial review of the pandemic control
EXPLORE SHINE