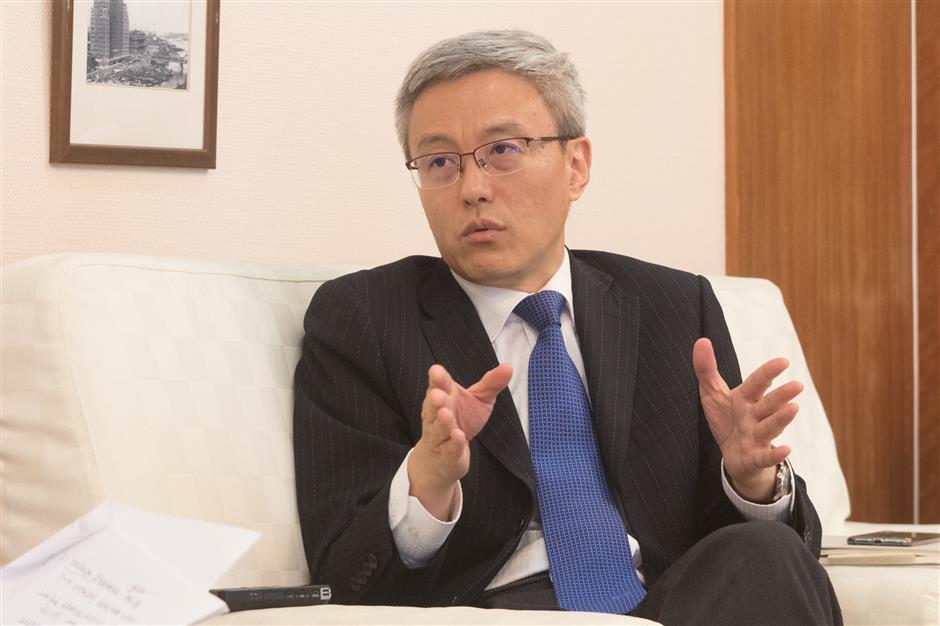 Chen Dongxiao, president of the Shanghai Institutes for International Studies, speaks to Shanghai Daily about China-US relations on the sidelines of the new “Trans-Pacific Exchange and Cooperation” photographic exhibition in Shanghai. This exhibition marks the 40th anniversary of the establishment of diplomatic ties between the two countries.

Editor’s note: As the world focused on the meeting between Chinese President Xi Jinping and his US counterpart Donald Trump at the recent G20 Summit in Osaka, Japan, Xi recalled the famous “ping-pong diplomacy” in 1971 in the nearby city of Nagoya.

The friendly exchanges between Chinese and US table tennis players, later referred to as a historic event with “the small ball pushing ahead the big one,” took place eight years before the two nations established diplomatic relations. What followed was many non-government exchanges across various fields that continued and expanded over the next four decades.

It is a view shared by Chen Dongxiao, president of the Shanghai Institutes for International Studies. The think tank is part of the new “Trans-Pacific Exchange and Cooperation” photographic exhibition and the “40 People on 40 Years” interview series, both containing many social exchanges and both commemorating the 40th anniversary of establishing diplomatic ties between China and the US.

He invoked the Chinese saying: "The key to sound relations between states lies in the affinity between their peoples.”

Chen has first-hand experiences of many cases where cultural exchanges contributed to stabilizing relations despite changes in geopolitics, policies or leaders.

He sat down with Shanghai Daily reporter Yao Minji to share such experiences, his latest insights from exchanges at the recent Shangri-La Dialogue and St. Petersburg International Economic Forum, and his outlook on China-US relations.

SD: Twenty experts from each side were interviewed for the “40 People on 40 Years” series, and in a preface it says that “most maintained cautious optimism about the long-term future” of China-US relations. It is obvious why many are cautious. What is the basis for their optimism?

Chen: Cautious in the short term and optimistic in the long run.

It is true that we are in a challenging period in the short term and there are several reasons for that.

If we look at the diplomatic history of the US, it tends to look for an external rival when it is divided internally.

There are many areas where China and US can cooperate, but the US intentionally turns a blind eye to such opportunities, claiming there is no potential for cooperation and highlighting the great-power competition instead.

That is not true, which is why in the long run there are reasons to be optimistic.

China-US relations are more than simply bilateral relations. It has to be put in the context of world history and the current global system.

We are in a very fragile system where countries are interdependent on each other. If the US tries to decouple from China, especially in trade and technology, it has to suffer great damage to its own economy and technological development.

American companies can’t take the consequences of decoupling either. Many American companies have their major markets in China, while their manufacturing costs will rise sharply trying to find substitutes for Chinese products. So such voices within the US will gradually be heard and understood against those of the hawks.

Internationally, US allies or friends will not follow the decoupling strategy. At this year’s Shangri-La Dialogue, Singapore Prime Minister Lee Hsien Loong quoted: “When elephants fight, the grass is trampled.” It is a concern shared by many countries, including many American allies. They will not follow the US if it opts for anti-China policies.

Such domestic voices and international concerns will lead to self-correction in US policies. In the long run, the two countries will negotiate and reach a new balance.

Moreover, China-US relations are bilateral, and their direction will not be decided unilaterally by America. China has been firm in its efforts to continue opening up and reform. China’s goal is to continue development and bring a better life for the Chinese people. It never intends, and will not seek, to replace the US.

SD: What about the Thucydides' trap then (where a rising power causes fear in an established power which escalates toward war)?

Chen: It is a theory based on cases in history, but I have my doubts whether it is still relevant today because there are many new factors in international politics never seen before the 21st Century. These factors change the whole game.

There are some traditional concepts in international politics such as great-power competition, power politics and national interest. But today we live in a globalized, multicultural world and information age, which was not seen before.

The world is too sophisticated to be simplified as a zero-sum game, which is the basis for the Thucydides’ trap.

That is why China has introduced the concept of a “shared future for mankind.” No matter how great the differences are, our shared challenges have never been greater or more urgent, demanding that we cooperate for a shared future.

SD: You mentioned cooperation repeatedly, what are some of the areas where China and the US can cooperate?

Chen: Many. It needs China and US to cooperate and also work with all other relevant countries and organizations.

For example, the recent development in cryptocurrencies is a challenge to the traditional monetary system managed by the central bank. It is a challenge for all countries. China and the US should work with international financial institutions on rules to regulate this area.

But hardcore hawks in the US ignore such opportunities and promote a decoupling strategy, especially in technology. They think that will make it easier for the US to put sanctions on China in the future.

The strategy is based on the false assumption that China has taken advantage of the US in the past. During the past four decades of bilateral relations and trade, Americans have benefited as well, but the profits were not evenly distributed domestically, causing some parts of the country to feel left out. And they are led by hardcore hawks who simplify the domestic issues to believe China is to blame.

SD: What is Shanghai’s role in China-US relations?

The further we continue in reform and opening up, the greater the achievements and hence the greater chance to push forward China-US relations.

Shanghai also plays a key role in China-US trade, and has great potential in the service industry, as China further opens its financial markets, health industry, education and consulting, among other service industries that are the strength of US economy.

Shanghai has also played a significant role in non-government exchanges for many years, through many established programs such as the international film, arts and tourism festivals, among others. The city’s institutions, hospitals and universities have many American partners and projects.

The city's inclusive culture, similar to the US, makes Americans feel at home here.

Special Reports
ADVERTISEMENT
61907
,
Reflections on China's effective containment tactic
Living under the shadows of two pandemics
Amid times of uncertainty, app preserves messages of hope and happiness
Vlog: Is Shanghai really getting back to normal?
Vlog: How does quarantine in Shanghai compare with New Zealand?
Inconvenient truth about the missed opportunity
The West's long learning curve in mitigating pandemic's economic impact
China success in containment of COVID-19 valuable
A simple way to keep COVID-19 economy working
A financial review of the pandemic control
EXPLORE SHINE