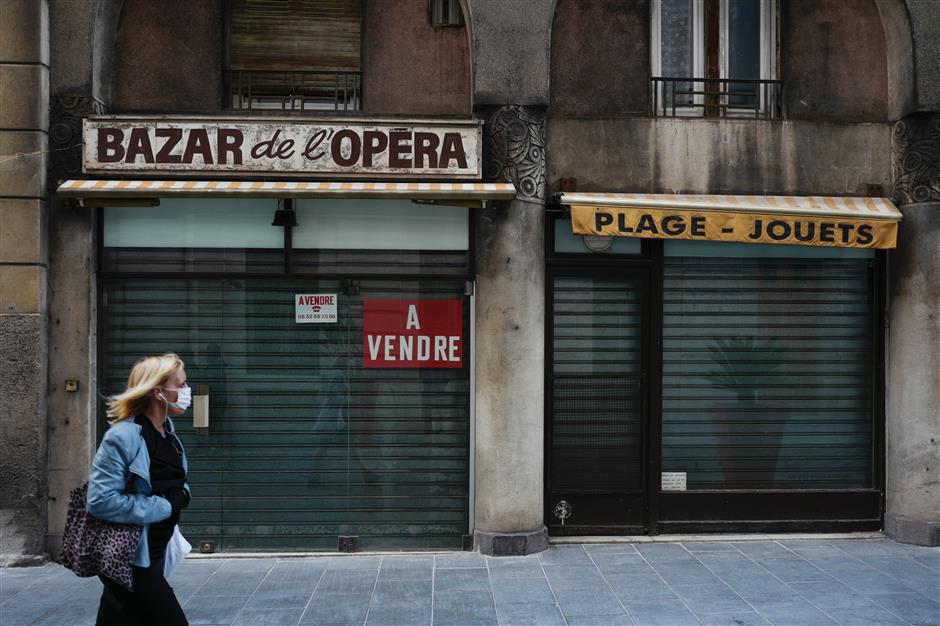 A woman walks past a closed shop with a "for sale" sign in the French Riviera city of Nice, southern France, on April 28, 2020.

Europe can see light at the end of the COVID-19 tunnel as the numbers of daily infections and deaths from the virus fall gradually across the continent. But the economic fallout from the “great lockdown” is still to come. The International Monetary Fund is forecasting that the eurozone will experience a drop in real GDP of more than 7 percent this year and only partly recover in 2021.

Europe, or rather the European Union, has been largely missing in action during the continent’s most serious crisis in generations.

Member states have not only engaged in an unseemly scramble to secure scarce medical supplies, but have also made little tangible progress regarding the EU’s contribution to the economic and financial costs of the crisis.

True, the European Central Bank has rightly done all it could to calm financial markets. But EU member states remain bogged down on the key question of whether the bloc can and will help fiscally stretched countries.

On the surface, the main dispute concerns whether the EU should issue mutualized “coronabonds” to finance health-care spending and other crisis-related expenditure in the hardest-hit countries. Yet, the real fight is not about “innovative financial instruments,” as eurozone finance ministers diplomatically put it at their most recent meeting, but rather about the future direction of fiscal policy and even the euro itself.

In their insightful book “The Euro and the Battle of Ideas,” the economists Markus Brunnermeier, Harold James and Jean-Pierre Landau analyzed the role played by ideas in 2010-14, when the eurozone at times seemed in danger of breaking up.

They argued that the management of the euro crisis was dominated by clashes between France and Germany, and that the two countries’ positions were largely determined by the fundamental economic ideas that dominated their domestic debates.

This time, however, the key fault line is clearly between Germany and Italy.

French President Emmanuel Macron is in a relatively comfortable position, because most French voters do not have a strong opinion on Euro- or coronabonds. By contrast, these instruments are at the center of domestic debate in both Italy and Germany — but are regarded very differently in each country.

In Italy, coronabonds are viewed as the natural expression of European solidarity. The government argues that the COVID-19 crisis could not have been expected; that Italy therefore deserves help from its European partners; and that coronabonds are the only acceptable solution.

Many Germans, on the other hand, regard coronabonds as a mortal danger, because they would open the door to the dreaded Eurobonds — which would mean that German taxpayers become liable for Italian debt.

Reasonable proponents of coronabonds in France, Spain and Italy do not understand this objection. After all, they argue, they are not asking for a German guarantee of existing Italian debt, only that the additional expenses stemming from this crisis should be financed by a common European instrument. But Dutch and German politicians fear mission creep, with a limited issuance of coronabonds paving the way for large, uncontrolled sums of other instruments.

Nor does it help that many in Italy and elsewhere do indeed dream of coronabonds opening the door for Eurobonds. They have long thought that the eurozone needs common debt instruments to become a “complete” monetary union, and they regard the current crisis as the ideal moment to achieve this goal.

The basic reason for this mutual distrust is the absence of a shared vision regarding long-term underlying fiscal principles. And because people see in crises what they want to see, which, as Harvard’s Dani Rodrik recently emphasized, often is an affirmation of their long-held beliefs, confirmation bias has only hardened the opposing sides’ positions. Thus, Germans see in the crisis vindication of their prudent approach to fiscal policy, because years of balanced budgets mean that their government can now spend much more on helping German workers and enterprises to overcome the crisis. But long-time critics of “austerity” see in Germany’s large budget deficit confirmation of their own position. After all, nobody can object to big deficits at the moment.

Unfortunately, this dialogue of the deaf distracts from the real issue, namely the direction of fiscal policy once the immediate crisis has been overcome. Should governments try to balance their budgets as quickly as possible and start reducing debt again? Or should they continue to run deficits for as long as interest rates remain low? The eventual outcome of this battle of fiscal ideas will be decisive for the future of the euro.

This is not an issue that will become relevant only in some distant future when the economy has recovered. More immediately, as long as this battle remains unresolved, member states will find it difficult ever to agree on a common European strategy to overcome the current crisis.

Special Reports
ADVERTISEMENT
61922
,
61927
,
COVID-19 and Europe's new battle of ideas
Protectionism leads us nowhere in COVID-19 fight
Good habits more than cures for epidemic
Stronger tech cooperation vital for swifter victory over virus
Back to life, back to reality: Healthy Shanghai heads out of the darkness
Cultivating communal spirit through shared readings
Complacency and blame game do not suit the US role as a 'responsible' superpower
Many deserve our praise for sacrifice in fight against COVID-19
Heroes redefined after coronavirus epidemic
Rethinking agricultural efficiency at the expense of natural renewal
EXPLORE SHINE