Will higher education reach a 'tipping point' after COVID-19? 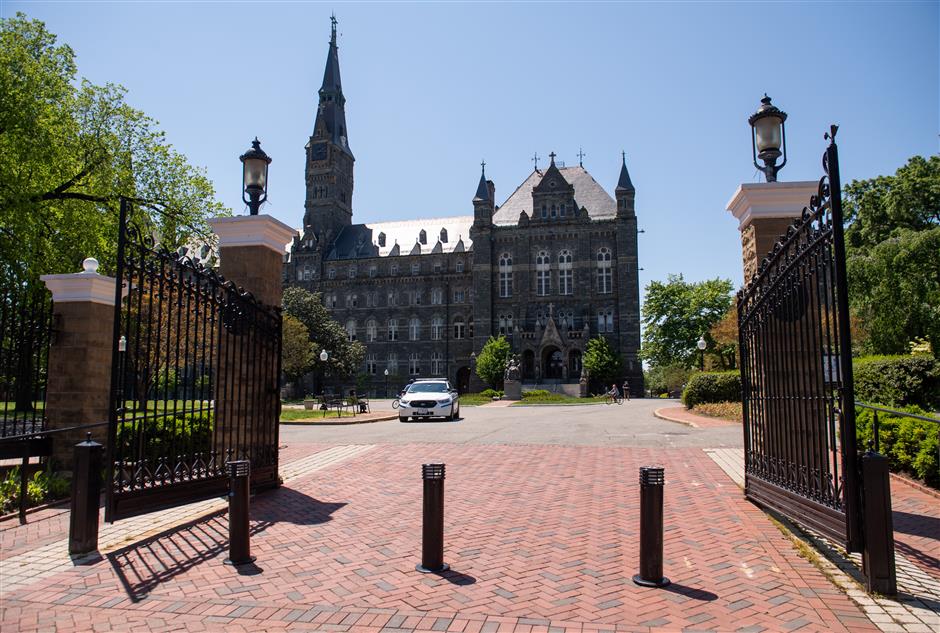 The campus of Georgetown University is seen nearly empty as classes were canceled due to the coronavirus pandemic, in Washington, DC, on May 7, 2020.

Throughout the past four months many areas of human existence have experienced profound transformations on a global scale. For those who work in the higher education sector, this time has been especially uneasy.

Universities rapidly converted their programs to online teaching and scrambled to provide new and imaginative formats for examinations. International students packed their belongings and returned to their home countries while those students preparing to study abroad have now had time to change their plans. University executives predict a massive loss of revenue in the coming academic year as a result of these shifts.

A recent post on The Studyportals website indicates that interest in traditionally popular study destinations, such as the United States, the UK and Canada, is now declining, especially among Asian students.

At the beginning of April, the British Council published the results of a survey of 11,000 Chinese students who considered studying in the UK. The survey shows that almost 40 percent of potential “study-abroad” students are considering cancelling their applications and now are seeking similar opportunities either in their own country or in neighboring countries or regions.

The primary reason for these cancellations is, obviously, connected with health and safety concerns. However, another key factor is the financial difficulties that these students may face. In the UK, the average cost of an undergraduate course for non-EU international students is US$20,000 per annum, while the Chinese average is less than half of this amount.

This consideration is especially important for students coming to Western universities from developing countries such as India or Malaysia whose ability to pay for their education is dependent on the socio-economic situation in their home countries, as well as the changing value of their national currencies. Therefore, throughout the current global economic hibernation, some potential “study-abroad” candidates are now forced to reassess the global higher education market from a more cost-effective perspective.

It is, of course, important to admit that the responsibility for a possible reduction of foreign students cannot be placed totally on the circumstances created as a result of the COVID-19 outbreak.

During the last 20 years, China has been building infrastructure to boost the development of world-class universities with an excellent capacity for both research and teaching.

With this increase in the quality of Chinese higher education, global interest in China as a study-abroad destination is also rising.

However, today just half of the international students who come to China are pursuing a diploma degree, whereas the other half are studying in exchange programs or in language schools.

As a consequence of the current global pandemic, however, this proportion may soon change.

Indeed a tipping point may be forthcoming, which will drastically shift the balance, resulting in an exponential increase in the number of international degree students in Chinese universities.

China was among the first countries to recover from the COVID-19 crisis, demonstrating its unique ability to arrive at a post-pandemic “business-as-usual” status.

One of the major functions of contemporary university is to produce human capital for sustainable growth of a knowledge-based economy.

For countries in the “Global South,” a partnership with China in the realm of education is an important opportunity to advance their position in human capital development.

That is why the position of Chinese universities cannot be seen merely as a tool to attract international students from regions of geographic proximity, but rather also as an opportunity to strengthen cooperation in higher education between emerging economies.

However, the current pandemic could lead to increase of international students from a variety of other locations, including countries with which China has formulated plans for future cooperation.

In the context of the rise of the Global South, Chinese membership of certain organizations and projects are now proving to be of growing importance. One example is the Belt and Road Initiative. Another is the BRICS union, a new multi-lateral cooperation.

Both initiatives are connected with new modes of development — therefore, both require innovative higher education projects.

The BRICS nations, for example, have entertained the idea of cooperation in higher education since 2016, the year that they established the BRICS Network University. Since then, the BRICS block has had long-term discussions on university partnership and the creation of dual-degree programs.

It is also important to acknowledge that the choice of study destinations can be subject to personal preference, rather than policy-induced process.

The student’s choice might be based upon multiple factors, such as teaching, the availability of scholarships and the rankings of their chosen institution in the global context, along with other considerations.

China has already made major progress in terms of a number of these criteria and is very generous in providing scholarships so as to attract more young talent from the Global South.

The contemporary university is thus a dynamic and constantly evolving space, combining various models of interaction.

In this sense, Chinese universities, which have emerged in recent times as dynamic and innovative institutions of higher learning, offer a highly attractive alternative choice as a destination for international students.

In particular, China has the potential to act as a global platform for an aspiring, new generation of visiting students from developing nations who, in turn, can have a tangible impact upon the cooperation between emerging-market nations and the various developing nations which follow in their footsteps.

This will help developing countries to strengthen the development of their human capital, enhance their own capacity for research and innovation and offer them a proper alternative, not only in terms of study abroad destinations for their students, but also as a choice distinct from the Western model of higher education.

Evgenia Likhovtseva works as a research associate at the School of Education of Trinity College Dublin. She is a multiple awardee of international scholarships including a visiting fellowship at the Fudan Development Institute in Autumn 2018. She specializes in comparative higher education and higher education policy development in the BRICS nations. The views are her own.