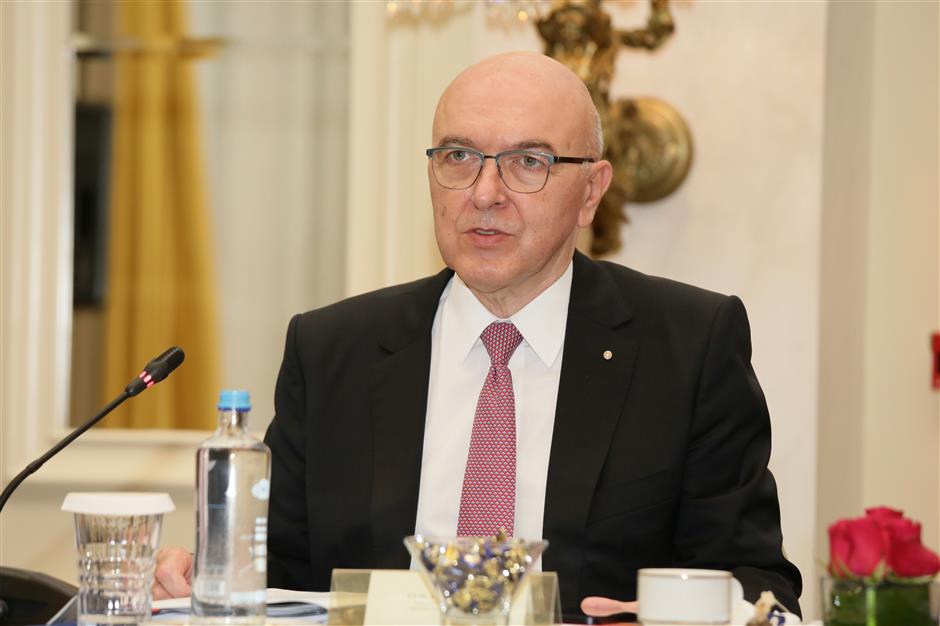 Greece and China have a long history of cooperation which is gaining momentum. This momentum, as well as the importance and the potential of our partnership, is reflected in recent high-level official visits of the president of China to Greece and of the Greek prime minister to China. And only a few days ago, on October 27, I had a very constructive meeting here in Athens with Chinese State Councilor and Foreign Minister Wang Yi during which we discussed our bilateral relations.

Economic cooperation between Greece and China is evolving at a stable pace. The strategic partnership between the two countries has been well established for more than 15 years.

As a member of the Belt and Road Initiative as well as the China-Central and Eastern European Countries Cooperation (or 16+1, since April 2019), Greece is expecting the creation of all crucial networks for the expansion of international trade. We are convinced that investments in infrastructure will lead to the establishment of an environment that encourages economic activity and provides motivation for steady and fruitful trade flow.

The novel coronavirus pandemic has highlighted the importance of global supply chains and, with it, the prospects for the post-COVID-19 logistics industry.

Greece, due to its strategic geopolitical position, has the potential to become the most important regional infrastructure hub in Southeastern Europe.

Greece is a major power in international shipping with a long and solid tradition in the industry. The Greek fleet is one of the largest commercial fleets in the world and operates globally. Piraeus was – and still is – the largest and most important Greek trade port, with international shipping connections, where the Chinese company COSCO has placed a major investment. Piraeus, along with the ports of Thessaloniki and Alexandroupolis operate as gateways to the EU and the Black Sea region.

A major reform of the infrastructure and transport sector in Greece is currently underway. This reform aims to upgrade the country's road, rail, shipping and air links by means of the privatization of certain ports and the construction of new road and rail networks. About 20 major public-private sector partnership projects are underway this year, with a budget of over 5 billion euros, while more are expected for the coming years. These projects include railway connections between six ports (Thessaloniki, Patra, Lavrio, Rafina, Kavala, and Alexandroupolis) which will be a great upgrade to our railway sector and will provide better transport services for trade.

The country's most important logistics projects – the Thriasio Pedio Freight Center near Athens that is currently under construction and the Thriasio Freight Railway and Sorting Station (Thriassio II), whose tender is expected soon, as well as the Gonos logistics center now being planned in Thessaloniki – will also help transform the sector.

Chinese companies are encouraged to invest in Greece and benefit from the advantage of services at the "gate" of Europe. The use of a warehouse/logistics center in Greece will help Chinese exporters to better adjust their supply chain to Europe and provide more efficient export services.

Another opportunity to further promote our fruitful bilateral cooperation is through trade. Despite a downturn due to the pandemic, our bilateral trade flows are expanding in principle. Acknowledging the vast differences in scale between Greece and China, I should point out that Greece's trade deficit to China is growing steadily year by year by about 10-15 percent. I believe there are practical ways to promote mutually beneficial initiatives toward this direction. Primarily, I hope we can enhance trade and customs cooperation in order to speed up permission for the export of quality Greek products to China, especially in the agri-food sector, which is consistent with the EU-China Agreement on Geographical Indications.

This year's China International Import Expo may well be an appropriate opportunity to review current affairs and plan the way forward. In this framework, Greece has a consistent history of participating in the CIIE since its inception. In fact, during the second CIIE in 2019, Greece was a Guest Country of Honor. Our delegation, headed by Prime Minister Kyriakos Mitsotakis, was accompanied by a powerful and diverse business mission of about 60 companies. We consider our participation quite successful, having created tangible bilateral opportunities and business potential moving forward.

This year, we are proud to be present again with a virtual National Pavilion along with a targeted group of enterprises based in China. It will be our pleasure to virtually host everyone interested, and we do hope that this will be one more opportunity for our people to get together and create paths taking us forward.

China and Greece can only benefit by opening-up to one another. It is upon us to materialize our approach, our concepts, and our goals; a large part of them runs through economic aspects, trade and investment, so let us build further thereupon, whenever and wherever we can.