The 5th of June 2022 will mark the 50th, or golden, anniversary of the establishment of diplomatic relations between the Hellenic Republic and the People's Republic of China. Obviously, both countries boast a much deeper past. Spanning over millennia, their histories are so long that 50 years initially may sound like an insignificant period.

Yet, as changes occur more rapidly in contemporary times than ever before, 50 years has proven to be a long enough period for enormous changes to have taken place. We have all borne witness to these spectacular global transformations.

But, let's take a minute to think of Greece and China back in 1972 when the first diplomatic ties were established. At that time, Greece was under a military dictatorship which seized power in 1967, only to be overthrown in 1974. Following the restoration of democratic rule, Greece became the 10th member of the European Union in 1981.

Membership of the EU helped the country modernize its state, ameliorate its infrastructures, strengthen its economy and accelerate social progress. Quite similarly, China was nothing like the country it is today back in 1972. Indeed, in the past 50 years, the world has watched China with admiration as it built a prosperous society, with its people enjoying higher standards of living, as hundreds of millions were lifted from poverty. Over this period, it has undergone a shift from a largely agrarian society to an industrial powerhouse. China's incredible rise over the past half-century is one of the most striking examples of the impact of opening up an economy to global markets.

Fast forward to the 21st century. The Belt and Road Initiative (BRI), rooted in the spirit of the ancient Silk Road, is an initiative that has added new meaning to the relationship between China and Greece and has opened up new opportunities for development of bilateral relations. More than 2,000 years ago, ancient Greeks thought of the far-off land in the east with ample imagination, dubbing China "the land of silk." It wasn't long before the two ancient civilizations conducted trading and learned from each other via the ancient Silk Road. In 2013, the modern Belt and Road Initiative was launched by Chinese President Xi Jinping, involving 144 countries and regions.

In 2018, Greece was the first developed country in Europe to sign the Belt and Road Memorandum of Understanding and, later, I personally attended the large BRI teleconference under China's Foreign Minister Wang Yi held in June 2020. I should add that the "Road," or sea route, involving Greece begins in Chinese ports, extends into the South China Sea and Indian Ocean and reaches Europe through the port of Piraeus.

Due to its strategic importance as a gateway to the rest of Europe, the port of Piraeus is one of the Chinese bridgeheads on the continent. State-owned China COSCO Shipping first secured the right to operate parts of Piraeus in 2008. It acquired 51 percent of the port's Greek state-owned operator in 2016, followed by an increase in its stake to 67 percent in October 2021. The port has prospered immensely in recent years, climbing from the 93rd largest container port in the world in 2010 to become the 29th in 2021. Over the past 12 years, a total investment of about 1 billion euros has been made, making Piraeus the largest port in the Mediterranean Sea and the fourth largest container handling port in all of Europe. 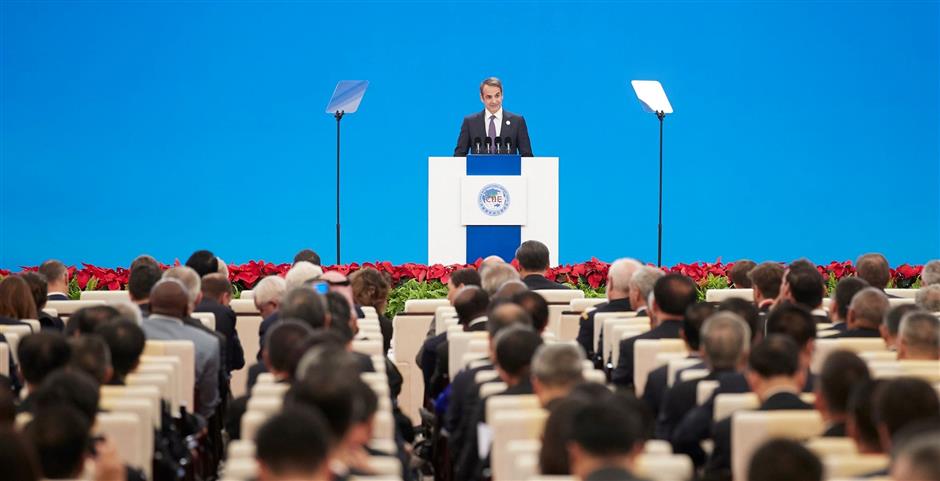 Greek Prime Minister Kyriakos Mitsotakis speaks at the opening ceremony of the 2019 China International Import Expo in Shanghai, where Greece was the guest country of honor.

Greece, however, is not only Piraeus and I strongly believe that Chinese businesses should take a closer look at the country for potential investment. In 2022, Greece has a unique opportunity for growth through Next Generation EU Funding and the country's Recovery and Resilience Plan. Our government's reforms since 2019 have already changed perceptions: in the past two years Greece has managed a complete turn-around and now ranks in the Top 10 investment destinations in Europe. This is according to the EY Attractiveness Survey of 2021, in which 75 percent of foreign investors also stated that they expect Greece to continue improving. What they see is a politically-stable country with an array of FDI incentives, solid institutional foundations, social cohesion and a highly qualified workforce, an excellent standard of living and great potential for growth and profits.

As far as opportunities for Chinese investments are concerned, shipping, infrastructure, transport services, supply chain and cargo handling continue to top the list, but there is ample opportunity for investments in the energy sector (renewable and alternative sources), agriculture and technology.

Apart from investments, trade also offers vast opportunities to further promote bilateral economic ties. Of course, we must acknowledge the enormous differences in scale between Greece and China and both sides should look for practical ways to reduce the trade deficit, which is growing in China's favor at a rate of 10-15 percent per year. This is true despite Greece's exports having increased over the past 25 years at an annualized rate of 16.6 percent. China looks to Greece for high quality export products and we warmly welcomed the signing of the EU-China bilateral agreement protecting geographical indications in September 2020. 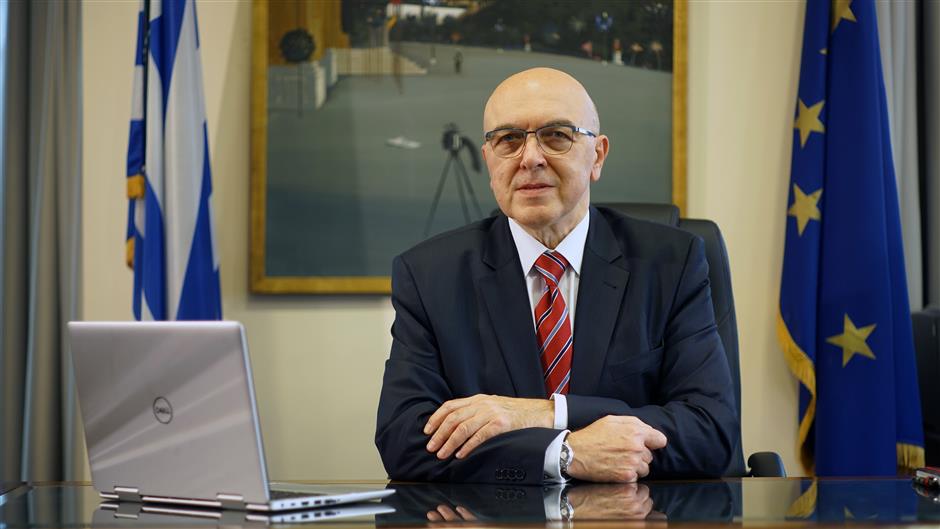 As my contribution is dedicated to the 50th anniversary of diplomatic ties, I would like to end this article with a particular reference to the China-Greece Year of Culture and Tourism that opened on September 16, 2021 and is also spanning into 2022. The opening ceremony was held at the archaeological site of the Ancient Agora, which was the commercial, social and political hub of democratic Athens during antiquity. Two statues were unveiled during the event, statues of men with a global impact over the past millennia: Confucius and Socrates. It is amazing that these two philosophers almost lived concurrently at opposite ends of the universe, missing each other by only nine years (Confucius died in 479 BC, while Socrates was born in 470 BC).

One of Greece's most famous novelists, Nikos Kazantzakis (author of "Zorba the Greek" and "The Last Temptation of Christ") had stated that "Confucius and Socrates were two masks that covered the same face of human logic." I think of this statement and realize how many more things people around the world have in common.

We should take the opportunity of the 50th anniversary of our diplomatic ties to focus even more on our common strengths, putting aside our differences. I think both China and Greece have proved that relations can grow amazingly through the adoption and implementation of mutually beneficial "win-win" cooperation projects. It only makes sense. This is truly the same face of human logic.

(The author is Greek deputy minister of foreign affairs.)