Beijing 2022 venue construction progresses on schedule and with sustainability 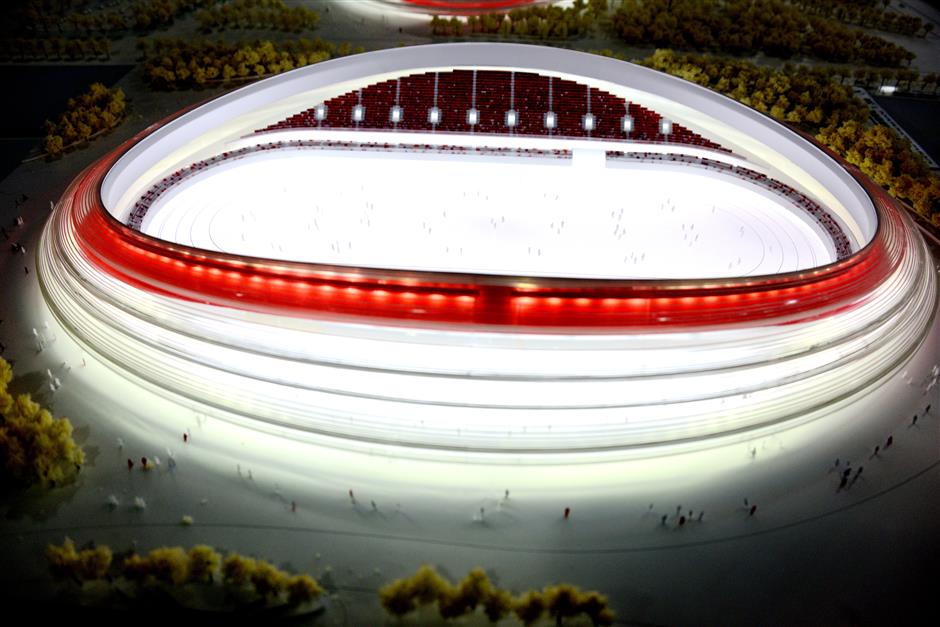 The model of the National Speed Skating Oval, dubbed the "Ice Ribbon."

The preparations for the Beijing 2022 Olympic Winter Games are progressing well on all fronts as the venue construction is on schedule and many legacy venues from Beijing 2008 will be used for Beijing 2022, while all new venues will be built with sustainability in mind.

Beijing 2022 will use 26 competition and non-competition venues in three zones, which are the Beijing Zone, the Yanqing Zone and the Zhangjiakou Zone. As the Winter Olympics enter Beijing time, the venue construction of Beijing 2022 has sped up on all fronts.

Thomas Bach, President of the International Olympic Committee, believes that Beijing 2022 will set a new standard for sustainability.

"The Beijing 2022 can set a new benchmark for a sustainable Olympic Games, on one hand benefiting from the legacy of the Beijing 2008 and on the other developing a new winter sports destination in a sustainable way," Bach told Xinhua at the Pyeongchang Winter Games.

With less than two years before the test events, the construction of major competition venues have to be finished before the end of 2019. The construction schedule is very tight as some of the work cannot progress in winter, especially in the Yanqing Zone where it is in high altitude and surrounded by mountains.

The Beijing Zone will be home to four Olympic winter sports, namely Curling, Ice Hockey, Skating and the newly established Big Air. It will group 13 venues, including eight from the Beijing 2008 Olympic Games, four newly built, and one temporary.

The Yanqing Zone, located 74 kilometers northwest of downtown Beijing, and with a total of five competition and non-competition venues, will host three sports (Alpine Skiing, Bobsleigh/Skeleton and Luge).

The city of Zhangjiakou is located in the northwest of Hebei Province and about 180 kilometers away from Beijing. With a total of eight competition and non-competition venues, the Zhangjiakou zone will host Skiing and Biathlon.

The multidimensional transportation is taking shape. Construction for the Beijing-Zhangjiakou Intercity Railway is underway, once finished, the travel between the two cities will be reduced to around 40 minutes, which will also lead to the integrated development of Zhangjiakou and Beijing. In the process of construction, the organizers and local government also spare no effort to control the budget.

Beijing will become the first city hosting both Summer and Winter Olympics. Many venues planned for Beijing 2022 are legacies from the 2008 Summer Olympic Games, such as the National Stadium, which is known as the Bird's Nest and will stage the opening and closing ceremonies of Beijing 2022, and the National Aquatics Center or the "Water Cube," which will be transformed to host curling event.

The National Speed Skating Oval, which will stage Speed skating at Beijing 2022, will also be a fitting addition to the architectural legacy of the Olympics.

Sitting in the Olympic Forest Park next to the Beijing 2008 tennis facility, the National Speed Skating Oval, dubbed the "Ice Ribbon," is already under construction and is expected to be completed by the end of 2019.

Twenty-two separate light strands (or ribbons) flow up and around the oval, representing the speed and trail of this sport. At night, the facade creates an exciting spectacle, with each of the strands becoming dynamic ribbons of light, able to change to an endless array of lighting programs.

High-tech is vastly adopted in many venues. The National Aquatics Center will be re-purposed from Water Cube to Ice Cube with a transferable rink. The National Skeleton and Luge Center also develops a technology named "Climate Protection System" combining the landscape, racing track and sun shield roof, which will reduce the climate influence toward the track and save energy to the most extent.

The organizers of Beijing 2022 not only capitalize on the venue legacy from 2008, but have also integrated long-lasting sustainable solutions across its various priorities. The Shougang Industry Park, a former steel mill that was closed down in 2008 ahead of the Beijing Summer Olympics, is now the location of the Organizing Committee's headquarters and is the location for Big Air in 2022.