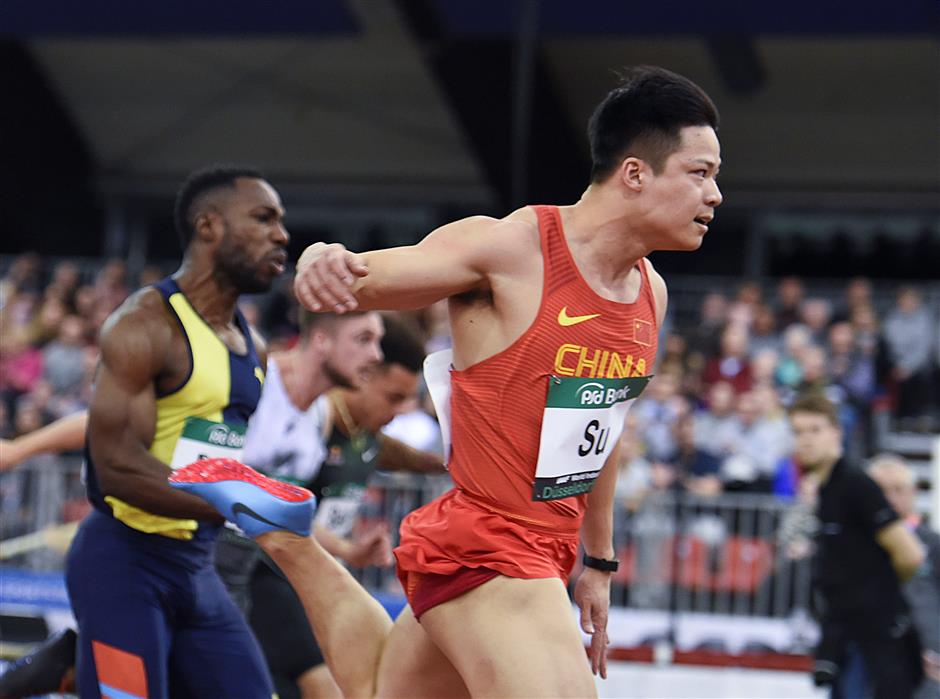 Su Bingtian snatches his third consecutive 60-meter victory in one week at the final stop of the 2019 IAAF World Indoor Tour in Dusseldorf, Germany, on Wednesday.

Su Bingtian continued his unbeaten run into the season as the Chinese star sprinter blazed to a 6.49-second clocking to pocket his third consecutive 60-meter victory in one week at the final stop of the 2019 IAAF World Indoor Tour in Dusseldorf, Germany, on Wednesday.

Although his reaction time of 0.124 seconds was the fastest among all the eight sprinters, the 29-year-old Asian record-holder failed to build a visible lead in the opening 40 meters. But he managed to pull away thanks to his powerful last 20m and hit home in style in 6.49s, 0.06s shy of the meet record he set last year.

"My reaction time today is very good, maybe my fastest one in recent years. But it is a pity that I did not seize this opportunity (to break the Asian record)," said Su, who impoved the Asian indoor record by three times last year and trimmed it to 6.42s enroute to grabbing the silver medal at the World Indoor Championships in Birmingham last March.

It was Su's third victory following his season-opening win of 6.52s in Athlone, Ireland and a 6.47s world-leading performance in Birmingham four days ago.

"I am satisfied to break 6.50s twice this year and hopefully I can maintain the form in 100m track and enjoy a injury-free outdoor season," he said.