Djokovic to face Nadal in French Open final blockbuster, but not 'biggest match' 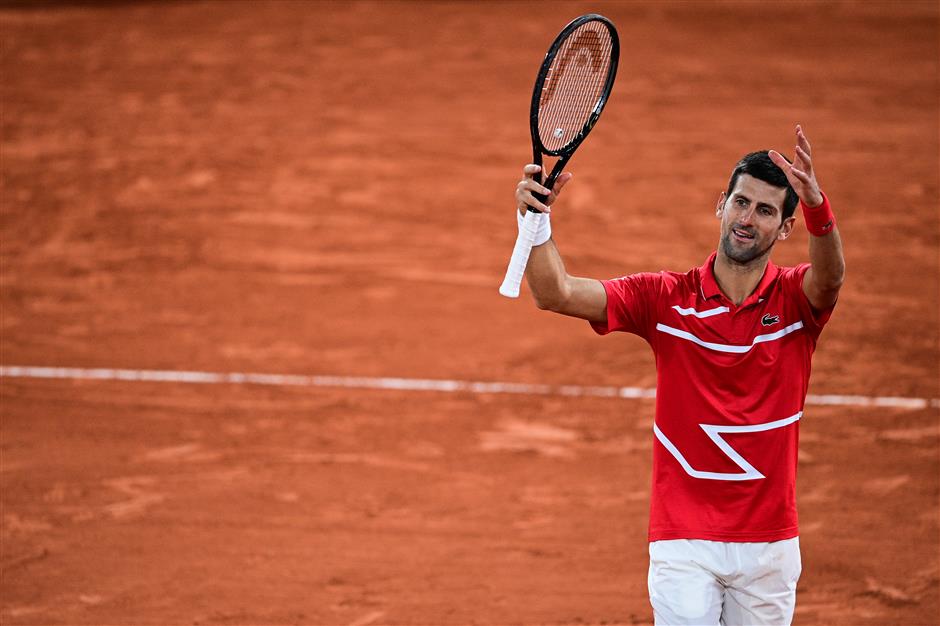 Serbia's Novak Djokovic celebrates after winning against Greece's Stefanos Tsitsipas at the end of their men's singles semi-final tennis match on Day 13 of The Roland Garros 2020 French Open tennis tournament in Paris on October 9, 2020.

Novak Djokovic set up a blockbuster French Open title showdown with Rafael Nadal after a dramatic five-set semi-final victory over Stefanos Tsitsipas, but insisted Sunday's eagerly awaited championship duel will "not be the biggest match of my life."

On Sunday, Djokovic can win an 18th major and become the first man in half a century to win all four Slams twice.

Djokovic is one of only two men to have defeated Nadal at Roland Garros in 15 years.

"This is the house of Rafa," said Djokovic ahead of the pair's 56th career clash and his 27th appearance in a Slam final.

"I will have the motivation to win. I beat him in the quarter-finals in 2015 but this will be the biggest challenge — playing Nadal on clay."

However, the Serb insisted that he has played far more significant finals and pointed to his first win over Nadal at a Slam at Wimbledon in 2011.

"I don't think it's the biggest match that I have ever played in my life. I think there were some bigger ones," Djokovic said as he attempted to ease some of the expectations ahead of Sunday.

"In terms of importance, probably the first Wimbledon final that I actually played against him.

"Wimbledon was always the one that I wanted to win as a kid and dreamed of winning. That's probably the one that stands out."

On Friday, Djokovic showed no sign of the neck and shoulder injuries which blighted his performance against Pablo Carreno Busta in the last eight as he stormed into a comfortable two-set lead.

For 34-year-old Nadal, his win over Schwartzman was his 99th at Roland Garros.

He is into his 28th final at the majors and has not dropped a set in the tournament this year.

Nadal has a 6-1 career edge of Djokovic at Roland Garros although their last meeting was in 2015 when Djokovic won in straight sets in the quarterfinals.

Amongst their five other meetings in the French capital were wins for Nadal in the 2012 and 2014 finals.

"Novak is one of the toughest opponents possible. But I am here to keep trying my best. I like to play in this scenario," said Nadal.

"I know I have to make a step forward. I think I did one today against Diego. But for Sunday it is not enough.

"I need to make another one. That's what I'm looking for. I going to work hard to try to make that happen."