As Facebook scandal mushrooms, Zuckerberg vows to 'step up' 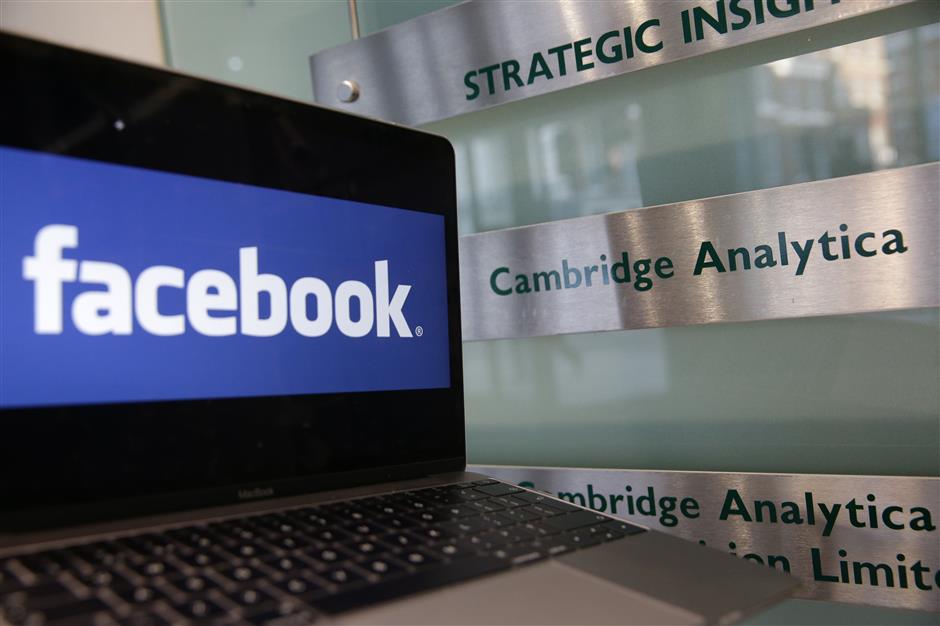 Facebook chief Mark Zuckerberg vowed on Wednesday to "step up" to fix problems at the social media giant, as it fights a snowballing scandal over the hijacking of personal data from millions of its users.

"We have a responsibility to protect your data, and if we can't then we don't deserve to serve you," Zuckerberg said, in his first public comments on the harvesting of Facebook user data by a British firm linked to President Donald Trump's 2016 campaign.

Writing on his Facebook page, Zuckerberg announced new steps to rein in the leakage of data to outside developers and third-party apps, while giving users more control over their information through a special toolbar.

"We know that this was a major violation of people's trust, and I deeply regret that we didn't do enough to deal with it," Facebook chief operating officer Sheryl Sandberg said in a post echoing Zuckerberg's comments.

Zuckerberg said measures had been in place since 2014 to prevent the sort of abuse revealed over the weekend.

"But we also made mistakes, there's more to do, and we need to step up and do it," he said.

The scandal erupted when a whistleblower revealed that British data consultant Cambridge Analytica had created psychological profiles on 50 million Facebook users via a personality prediction app, created by a researcher named Aleksandr Kogan.

The app was downloaded by 270,000 people, but also scooped up their friends' data without consent -- as was possible under Facebook's rules at the time.

Facebook says it discovered last week that CA may not have deleted the data as it certified.

Zuckerberg's admission follows another day of damaging accusations against the world's biggest social network as calls mounted for investigations on both sides of the Atlantic.

Max Schrems, a Vienna-based activist who has brought online data protection cases before European courts, told AFP he complained to the Irish Data Protection Authority in 2011 about the controversial data harvesting methods.

Schrems also recounted meeting with Facebook representatives the following year to discuss concerns around apps operating in this fashion.

"They explicitly said that in their view, by using the platform you consent to a situation where other people can install an app and gather your data," Schrems said.

ABC News reported that special counsel Robert Mueller, who is investigating Russian interference in the 2016 campaign, was looking at Cambridge Analytica's role in the Trump effort.

The British firm has maintained it did not use Facebook data in the Trump campaign, but its now-suspended CEO boasted in secret recordings that his company was deeply involved in the race.

The data scandal has ratcheted up the pressure on Facebook -- already under fire for allowing fake news to proliferate on its platform during the US presidential election.

A movement to quit the social network gathered momentum, while a handful of lawsuits emerged which could turn into class actions in a costly distraction for the company.

One of those calling it quits was a high-profile co-founder of the WhatsApp messaging service acquired by Facebook in 2014.

"It is time. #deletefacebook," Brian Acton said in a tweet protesting the social media giant's handling of the crisis.

Both Facebook and CA have denied wrongdoing, as attention focused increasingly on Kogan, the inventor of the controversial app -- a personality survey dubbed This Is Your Digital Life.

But Kogan said in an interview he was "stunned" by the allegations against him, claiming CA had assured him his activities were above board.

"I'm being basically used as a scapegoat by both Facebook and Cambridge Analytica," he told the BBC. "We thought we were acting perfectly appropriately. "

The University of Cambridge psychologist said CA had approached him to do the work, and that he did not know how the firm would use the data collected with his app.

European Union officials have called for an urgent investigation while British, US and EU lawmakers have asked Zuckerberg to give evidence.

British Prime Minister Theresa May has urged Facebook and CA to cooperate with the national information commissioner's probe.

"The allegations are clearly very concerning," she told MPs.

"People need to have confidence in how their personal data is being used."

Facebook shares steadied Wednesday, gaining 0.74 percent after steep declines this week that wiped out some US$50 billion in market value.

"Investors now have to consider whether or not the company will conclude that it has grown in a manner that has proven to be untenable," Wieser said in a research note.