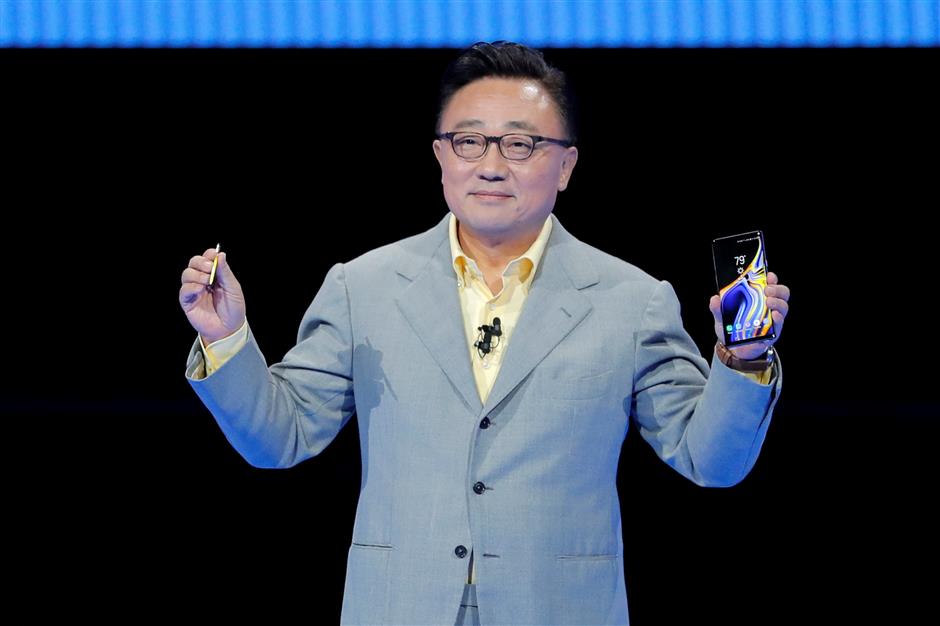 Samsung Electronics Co Ltd unveiled the Galaxy Note 9 "phablet" in New York on Thursday in a key product launch that it hopes will attract younger customers with stepped-up features and services for gamers and music-lovers.

Launching the Note 9 at 11am. in New York, or Friday midnight in Seoul, Samsung also announced partnerships with global hit game Fortnite and music-streaming service Spotify Technology SA in a stepped-up challenge to Apple Inc in the premium-phone race.

Samsung's new focus marks a shift away from its previous positioning of the Note as a multi-tasking device popular with graphic designers and artists.

But the hefty price tag - at US$999.99 for the base 128 gigabyte model, according to US carrier Verizon Communications Inc - has raised questions as to whether features such as a longer battery life and quick cooling would be enough to attract customers.

"I couldn't find anything that was eye-catching enough to prompt customers to ignore the high price tag," said Greg Roh, an analyst at Hyundai Motor Securities.

Shares of Samsung were down 3.5 percent in Seoul, mirroring weakness in other chip-related stocks.

Samsung is under pressure to jump-start faltering smartphone sales after posting its slowest quarterly profit growth in more than a year, as rivals such as China's Huawei Technologies nipped at its heels with cheaper, feature-packed models.

The Note 9 will support up to 1 terabyte of memory - a 512GB version that can take another 512GB through a memory card - making Samsung the first major smartphone maker to sell a 1TB phone.

The phablet - a cross between a smartphone and a tablet - will hit stores on Aug. 24, Samsung said.

Verizon said the Note 9 will be available for pre-order from August 10, with the 512GB model priced at US$1,249.99. Sprint Corp will introduce the device on August 24 at a 50 percent discount as part of a promotional scheme.

The Note 9 is the first Android phone to support Fortnite, a hugely popular video-and-smartphone survival game that was only playable on computers, consoles and Apple products until now.

It also comes with a Bluetooth-enabled stylus designed to act as a remote for snapping photos and controlling YouTube video playback.

The New York event also featured a Samsung Galaxy watch and Galaxy Home speaker, a device that will use its Bixby voice assistant and compete with similar products from Amazon.com Inc , Apple and Alphabet Inc's Google.

Spotify will be supported on the speakers, along with all other Samsung devices - news that sent shares in the music-streaming service provider up nearly 5 percent.

Samsung is counting on the Note 9 to outsell the Note 8 to stem a sales slump. It said last month its flagship Galaxy S9 phone missed sales targets, sending profits in the mobile division down by a third in the April-June quarter.

Samsung does not break out shipments of its smartphone models, but analysts reckon it has shipped around 10 million Note 8 models so far.

"The jury is still out if the device can boost sales of Samsung's premium category," mobile phone market tracker Counterpoint Research said in a blog, pointing to stiff competition from the iPhone X, Huawei's P20 Pro and the Find X from China's Oppo Electronics.

"The price is a big factor."

Huawei predicted last week it would become the world's top smartphone seller by volume - displacing Samsung - in the final quarter of next year, while Apple sold more of its US$1,000 iPhone Xs in the June quarter.