Apples's business in China is under a cloud after a court ordered a ban on sales of seven old models of iPhones as a result of a patent dispute with chip designer Qualcomm.

The injunction doesn’t include the latest models such as iPhone XS and Max.

The ban is not a final legal judgment and all phones are still available.

The patented technology allows consumers to adjust and reformat the size and appearance of photographs, and to manage applications using a touch screen when viewing, navigating and dismissing applications on their phones, Qualcomm said.

In July, the same court banned the import of some microchips by Micron Technology Inc into China, citing violation of patents held by United Microelectronics Corp.

Apple said it would file a request with the court for reconsideration.

IP lawyers said the appeal process could take the case up to the Fujian provincial high court and then go as far as the Supreme Court in Beijing, a process that would likely take many months given the high-profile nature of the case.

To enforce the ban, Qualcomm separately will have to file complaints in what is known as an enforcement tribunal, where Apple will also have a chance to appeal.

On the NASDAQ, Apple shares rose less than 1 percent to US$169.60, recovering from an early drop when it became clear phones were still on sale, and Qualcomm stock rose 2.2 percent to US$57.24.

Since January of 2017, the two tech giants have been engaged in a wide-ranging legal battle over patents.

It started after Apple sued Qualcomm for collecting royalties on the sale price of iPhones up to US$400.

As the world’s top mobile chip designer, Qualcomm charges mobile vendors a percentage royalty fee, 3.25 percent on average according to analysts, for each mobile device. This affects the profitability of vendors selling high-end models, especially iPhone.

Qualcomm has also sued Apple for infringing on its patents in the United States and Germany.

It is seeking an injunction on iPhone sales in those markets.

“Apple continues to benefit from our intellectual property while refusing to compensate us,” Qualcomm said.

But Apple said the case was “another desperate move by a company whose illegal practices are under investigation by regulators around the world.”

Yiqiang Li, a patent lawyer at Faegre Baker Daniels, said the Chinese injunction could put pressure on Apple to reach a global settlement with Qualcomm. 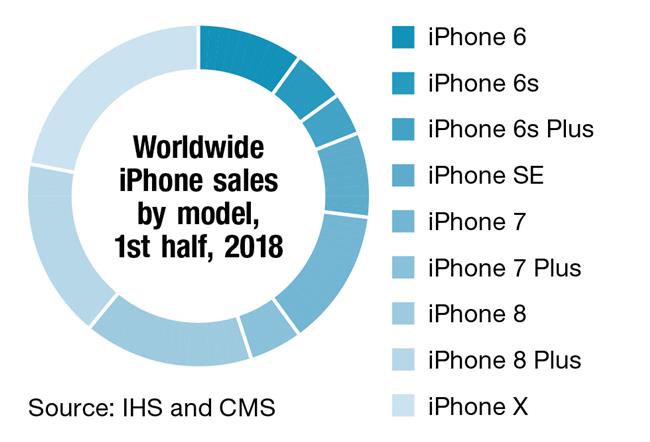 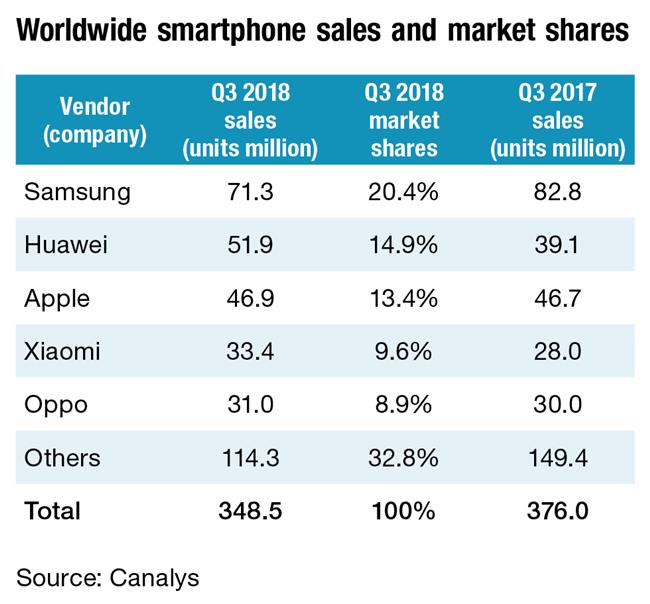 Analysts say the effect of the patents lawsuit on Apple will be “limited,” even if the injunction turns to be a ban.

Global iPhone sales will be affected by 3.6 to 6.7 percent if the old iPhone models are banned in China, the China Merchants Securities said.

It said the ban could have an impact of about US$12 billion in sales.

But the ruling still brings uncertainty to Apple in China, its strategic market, where it faces challenges for local brands such as Huawei, industry insiders said.

In the third quarter, Huawei has overtaken Apple as the second biggest smartphone vendor globally, with a 14.9 percent market share compared with 13.4 percent of Apple, according to researcher Canalys.

The China market’s contribution to the iPhone global sales has dropped to 19.4 percent in the third quarter, compared with 21.4 percent a year ago.

But the new models may lift iPhone sales in China in the fourth quarter, analysts said.

China is the largest market for the iPhone XS and Max supporting dual-SIM, accounting for 45 percent in sales following the US, its second largest market at 27 percent, said Canalys.

Apple can negate the lawsuit by updating the iOS operating system, analysts and tech experts said.