Robots with unique functions like disinfection, delivery and rehabilitation assistance are exhibiting their talents to global consumers at the ongoing 2020 China International Fair for Trade in Services, which kicked off in Beijing on Friday.

Themed “Global Services, Shared Prosperity,” the fair is the first major international trade event being held both online and offline in China since the COVID-19 outbreak.

In an exhibition area at the fair, a snail-like robot can be seen automatically moving toward a storage box, loading itself, entering an elevator and putting the box back in place after delivery.

The building distribution robot then takes a nearby disinfectant box and becomes a sterilizing vehicle.

According to Zhang, Candela sent a number of Candle robots to the makeshift Huoshenshan, Leishenshan and Jinyintan hospitals to aid in the fight against COVID-19 in the hard-hit city of Wuhan during the early days of the outbreak.

In addition to routine distribution and handling services, one of the robots at the Leishenshan hospital was assigned a special mission in late February. It was tasked with sending a wedding cake to a couple who were then working in the hospital and were unable to have their wedding ceremony in Shanghai as originally scheduled.

“It was a special wedding. The hospital became the marriage hall, the protective suit became a wedding gown, and the Candle robot was the cake delivery man,” Zhang recalled. “Technology warmed people’s hearts, and made the cold winter warmer.” 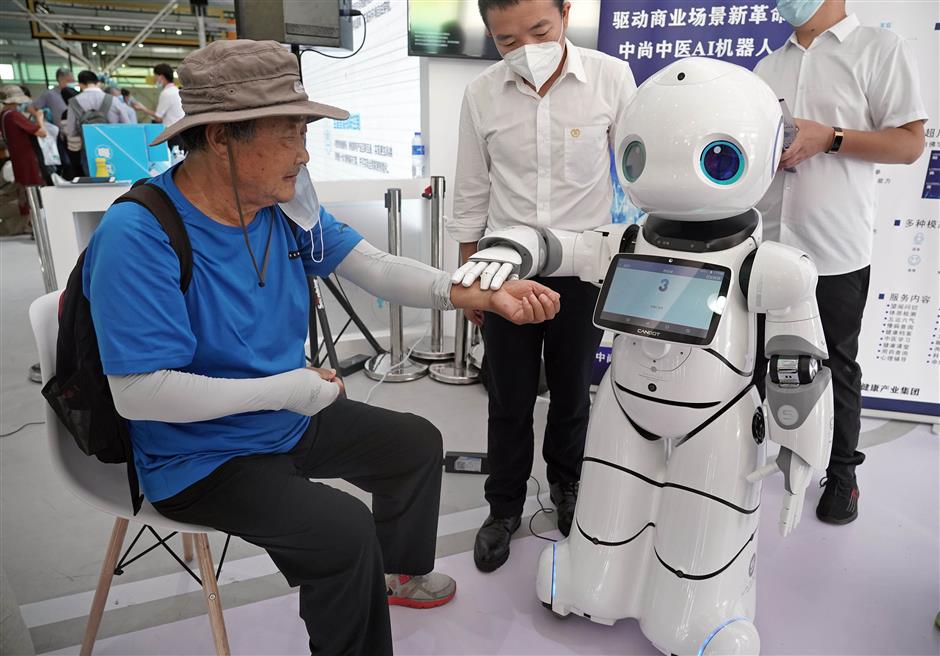 A visitor has his pulse taken by an artificial intelligence robot proficient with traditional Chinese medicine at the ongoing 2020 China International Fair for Trade in Services in Beijing.

An AI nursing robot at the fair can be seen simulating rehabilitation training for patients, helping a stuffed teddy bear lift its back, bend its knees and turn over. This has attracted significant attention at the booth operated by Shenyang-based Siasun Robot and Automation Co.

Siasun has been in touch with the First Hospital of China Medical University in Shenyang since the early outbreak of COVID-19. It has donated 10 nursing robots and seven logistics robots to the hospital, according to Li Xuewei, of Siasun’s medical and health robot division.

“At the CIFTIS, people can experience all kinds of robots that are better serving human beings now,” Li said.

Shenzhen-based UBTECH Robotics Corp has brought its intelligent thermal detection robots, which participated on the frontline in the anti-epidemic battle, to the fair.

Zhou Jian, founder of UBTECH, said the robots have not only taken up tasks at hospitals, schools and enterprises in China, but have also provided anti-epidemic services in South Korea, Japan, Belgium, Nigeria and other countries.

Thirty robots from OrionStar, a service robot firm invested by Cheetah Mobile, are being used at the fair. They guide visitors, displaying information and selling products like coffee.

Over 7,000 similar service robots have been deployed in 887 shopping malls in 32 cities nationwide.

The global robot market was valued at about US$29.41 billion in 2019, with service robots contributing nearly one third of the total and seeing the fastest growth of 14.1 percent, according to the Chinese Institute of Electronics.