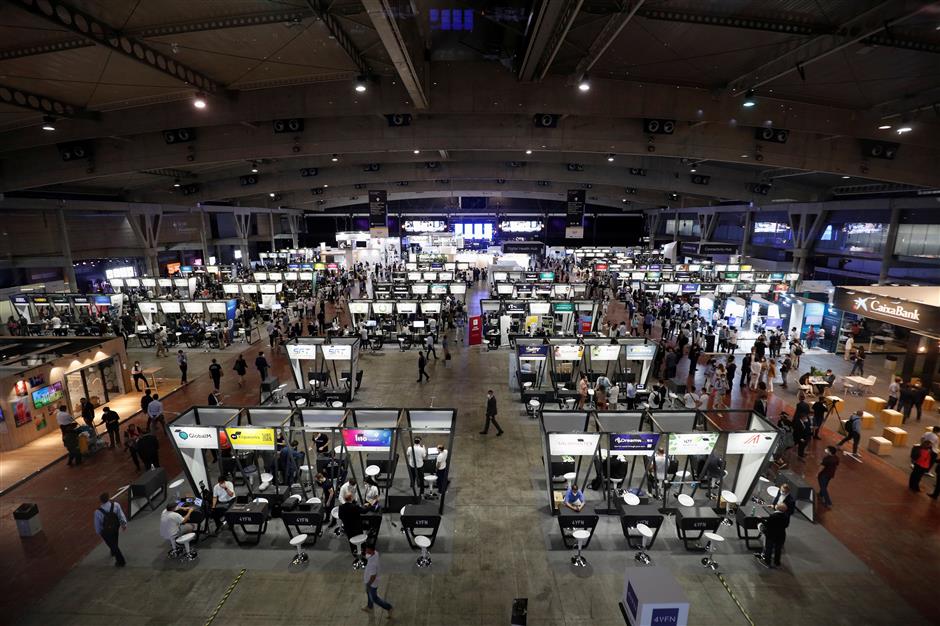 The scene at the Mobile World Congress in Barcelona yesterday.

A major wireless technology trade fair kicked off in Barcelona yesterday with scaled-back attendance and beefed-up health and safety measures, changes that reflect the new reality for industry conventions in the post-pandemic era.

Mobile World Congress was canceled at the last minute last year because of COVID-19 concerns. Its 2021 revival makes it one of the few big trade shows to attempt a comeback even as the coronavirus pandemic continues to simmer in many parts of the world.

The show, known as MWC, is typically a glitzy and well-attended affair, with tech and telecom companies setting up elaborate pavilions to unveil the latest mobile devices, entertain clients and lobby government officials. But this year, the world's biggest mobile industry trade show is likely to be a shadow of its former self.

"Obviously, there is a huge difference from previous years. This show is going to be much smaller, much safer from a health and safety perspective," said Mats Granryd, director general of GSM Association, which organizes the show and represents more than 750 mobile network operators.

"We're taking a lot of precautions: Testing people regularly within 72 hours, no hands, everything is touchless."

Still, companies like Ericsson, Nokia, Intel, Sony and Qualcomm are staying away while South Korea's Samsung, the world's biggest mobile phone maker, is only holding a virtual device launch. Chinese tech giant Huawei, a major sponsor, is one the few big names that will have a show stand.

Other visitors will be attending virtually, as will a third of the show's 350 speakers, including Tesla founder Elon Musk.

The GSMA delayed the show from its usual February slot to buy time in the hope the pandemic would be under control. Granryd said they plan to move it back to February for 2022.

To help make the four-day show happen, Spanish authorities agreed to exempt exhibitors, attendees, sponsors and partners from travel restrictions that might prevent them from entering the country.

At Barcelona's Fira Gran Via exhibition center, safety features include COVID-19 testing and extra ventilation. Attendees must wear masks and an official MWC app will allow them to show a negative test result.