Along the River During the Qingming Festival

If Leonardo da Vinci’s “Mona Lisa” usually attracts the biggest crowd at the Louvre every day, the Chinese equivalent would very likely be the painting entitled “Along the River During the Qingming Festival.”

During the 2010 World Expo in Shanghai, a 3D animated version of the painting displayed in the China Pavilion attracted 9.28 million viewers, nearly identical to all the people who visited the Louvre in 2012.

Unlike the “Mona Lisa,” the Chinese painting is not a portrait. Instead, it’s a 25.2cm x 528.7cm handscroll depicting 814 people, 73 domesticated animals, more than 20 vehicles, 29 boats and all types of buildings, bridges and city walls.

If you are reading on a mobile gadget, turn horizontal and enjoy.

“Along the River During the Qingming Festival” is a 25.2cm x 528.7cm scroll depicting 814 people, 73 domesticated animals, more than 20 vehicles, 29 boats and all types of buildings, bridges and city walls. Different books give different numbers. If you have time, try to count them all yourself. 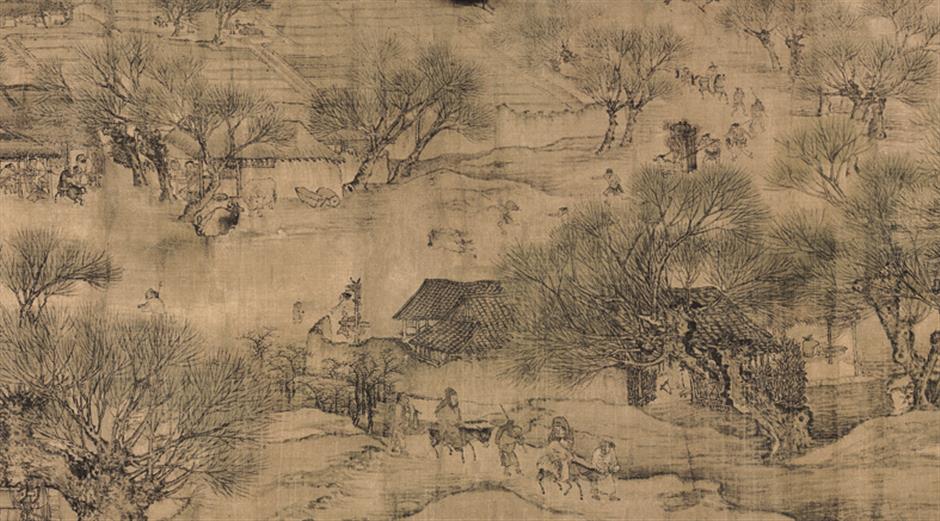 The painting starts with a wealthy family returning from the outskirts after sweeping the tomb of their ancestors. The husband rides a horse and the wife is in a sedan decorated by willow branches. Some parts are blurry.

Ink and color on silk, the original painting is usually attributed to Zhang Zeduan (1085-1145), a famous painter of the Northern Song Dynasty (960-1127) who once served in the imperial court as a professional artist.

As a genre painter, Zhang was known for his superb technique and portraying scenes of everyday life. He was particularly good at painting meticulously detailed buildings, street scenes, markets, bridges, city walls and vivid figures and animals.

“Along the River During the Qingming Festival” is widely believed to depict scenes along the Bian River in Bianjing, then the capital of the Northern Song Dynasty and now Kaifeng City, Henan Province.

The Qingming Festival, which usually falls in early April each year, is a traditional Chinese holiday also known as Tomb-Sweeping Day, a time to worship one’s ancestors.

In this painting, instead of the usual ceremonies of tomb sweeping and prayers, Zhang depicted people gathering along the Bian River for the festival and engaging in all kinds of activities.

The panoramic painting drawn with a cavalier perspective can be roughly divided into three sections — the rural scenery of the capital, the scenes along the river and the streets inside the city.

The rural part on the right features bucolic scenery of farm fields, farmers, herdsmen and other rural folk.

The middle section shows businesses and the crowded grandiose Rainbow Bridge, the main focus of the whole scroll.

In the urban section, there are more shops, offices and other buildings. Also, the artist portrays all kinds of people here, such as officers, peddlers, shoppers, porters, diners and even beggars.

Obviously, the painting gave full play to all weapons in the artist’s arsenal.

The middle section depicts all kinds of businesses and the crowded grandiose Rainbow Bridge, the main focus of the whole scroll.

In addition to the matchless artistic value of the painting, the masterpiece also reveals numerous details about Song people’s daily life, their clothing, local customs and architecture.

No wonder, ever since its creation, the painting has been hailed as a natural treasure and the most renowned masterpiece among all ancient Chinese paintings.

As a result, in the following 1,000 years, many Chinese artists generated a number of copies and replicas of the river painting, using roughly the same composition, but different techniques. Some even changed the settings and updated the costumes and vehicles. 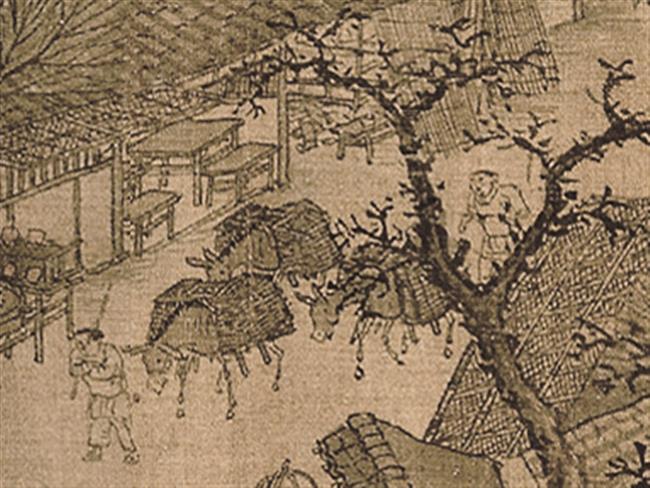 Most researchers believe the painting depicts a scene during the Qingming Festival, yet some say it was set in autumn, as they found details like donkeys carrying firewood and people using fans. What do you think?

According to estimation, there are about 30 different versions existing today. More than 10, including the original work of the Northern Song Dynasty, remain on the Chinese mainland. Nine are in Taiwan, five in the United States and Britain and Japan have one each.

Through a long history of transmission, the original painting by Zhang was retrieved by an officer of the army led by the Communist Party of China in 1948 after Changchun, the capital of northeastern China’s Jilin Province, was liberated.

Now, it’s in the Palace Museum’s collection in the Forbidden City in Beijing, but it is rarely exhibited in order to protect it from damage.