Traditional music in tune with the times 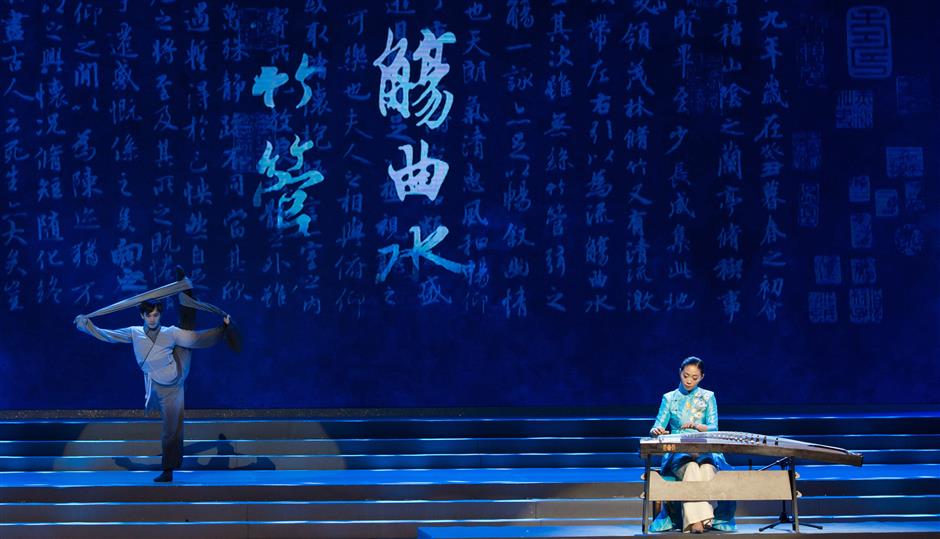 The high-pitched, bright tones of the suona, a Chinese double-reed woodwind shaped like a horn, resemble birdcalls. Not surprising then, one of the most famous pieces for the traditional instrument is called “A Hundred Birds Paying Homage to the Phoenix.”

The Shanghai Chinese Orchestra revived the old piece with modern overtones as “Phoenix Dance” and presented it as part of an original program called “New Oriental Chinese Music Scene.”

“Traditional Chinese music is not losing attraction as the movie ‘Song of Phoenix’ (2016) once suggested,” says Luo Xiaoci, president of the orchestra. “I am proud that we are doing everything we can to explore classic Chinese music in new ways for our audiences.”

“Phoenix Dance” was staged by the orchestra together with child performers voicing hundreds of birds with the suona in their hands, set to a backdrop of an electronic band.

The performance of “New Oriental Chinese Music Scene” opened the 18th Shanghai International Arts Festival in 2016 and last year was staged in Greece for the celebration of the 45th anniversary of Sino-Greek diplomatic relations. The show will begin a European tour next week, with eight concerts in Britain, France, Belgium and Germany.

The innovative coupling of traditional Chinese music with modern electronic and multimedia elements has been well received by Chinese audiences. The European tour will feature more symphonic elements catered to continental tastes.

Yes, the orchestra is showing that traditional Chinese music can be adapted for contemporary audiences, and ancient instruments can resonate in today’s concert halls.

From the tones of the gudi, a bone flute dating back 8,000 years, to the plaintiff sounds of the two-string erhu and cello in the “Butterfly Lovers,” the music is riveting. In the piece “Flight of the Bumblebee,” the erhu joins the four-string ruan, the sheng, a reed pipe, and Chinese percussion instruments to concert perfection.

“I believe it will be a fresh experience for European audiences, in the same way that Chinese audiences were awed years ago,” says Luo. “I hope our performances will highlight China’s rich and long cultural history.” 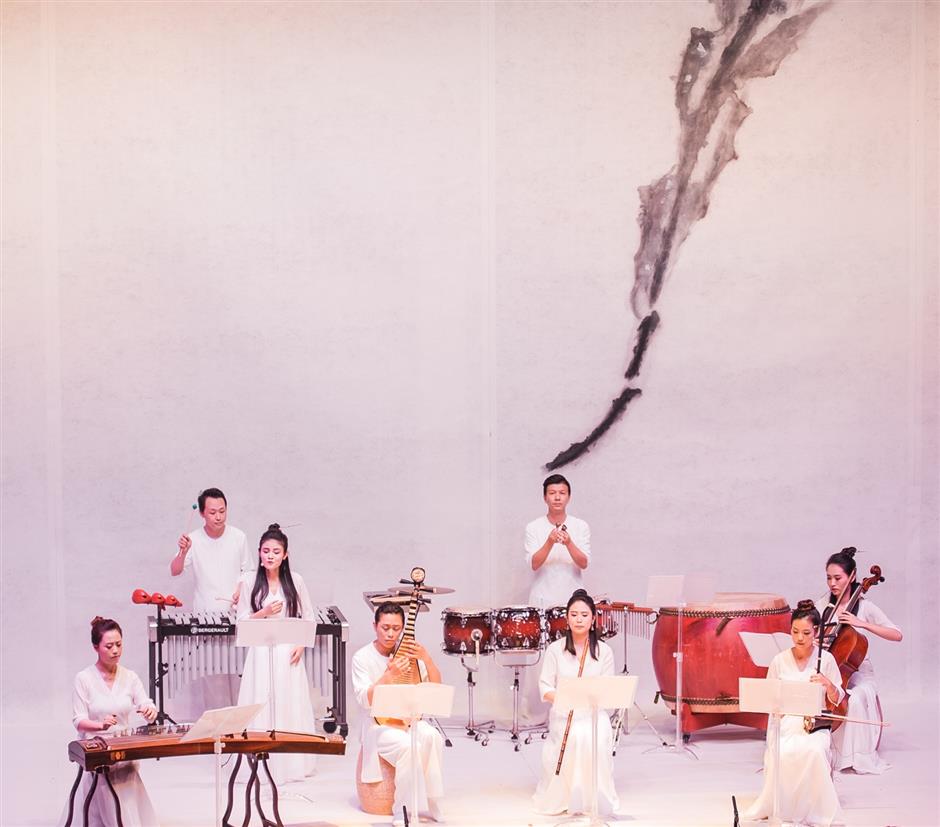 Shanghai Chinese Orchestra staged a mountain-themed concert in November 2017, with all programs inspired by Chinese poems involving mountains. It was the first concert of the orchestra’s “Chinese Poem, Calligraphy and Paintings in Chinese Music” series. 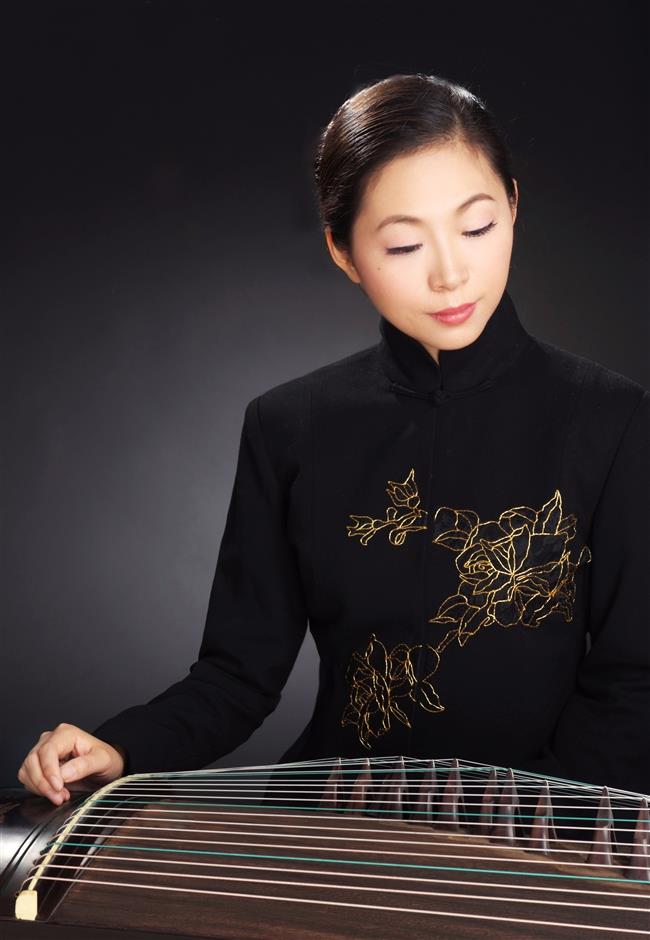 Luo Xiaoci, president of Shanghai Chinese Orchestra, is a virtuoso in the zheng, or Chinese zither.

The orchestra has a wide range of repertories to draw on, from large orchestral works to intimate chamber pieces. Its musicians include erhu virtuoso Ma Xiaohui, bamboo flute master Lu Chunling and guqin soloist Gong Yi.

With younger generations of Chinese unfamiliar or disinterested in traditional music, the orchestra has made a great effort to experiment with new ways of blending old with new.

It hasn’t been easy. Some critics have decried the turn to larger symphonic works from the ancient tradition of smaller chamber music pieces.

Luo says that’s a bit like complaining that a wine is bad because of its bottle.

Indeed, new productions that retain traditional aesthetics can highlight the beauty of traditional Chinese instruments, tuning them to modern tastes, she notes. The Shanghai Chinese Orchestra has been innovating in that mode for many years.

The orchestra has encouraged musicians from all genres to create new works for traditional Chinese instruments.

“We keep our door open to any musician, whether from film, symphony or pop,” says Luo. “As long as they are interested in traditional Chinese music, we are more than happy to help them and support their compositions.”

Quite a number of the pieces in “New Oriental Chinese Music Scene” were actually written by young composers who had hardly worked in traditional Chinese music before. To give them grounding, composers were often paired up with particular instrument players before composition even began.

“The composers are good at musical ideas and structures, while the players are familiar with the range and abilities of a particular Chinese instrument,” says Hu Chenyun, head of the orchestra’s Creative Planning Department. “We can perfectly complement each other and inspire a better work.”

Hu, an accomplished suona player, collaborated with composer Huang Lei in the creation of “Phoenix Dance.”

A professional sound engineer was recruited to help amplify the limited volume of certain instruments while keeping their sounds true.

Tapping a Western composer for a traditional orchestral work was a first in China, according to Luo. The result was a big success.

For his work, Jost changed the seating layout of the orchestra and adjusted the pitches of particular instruments for a more colorful and harmoniously round sound.

“As a European musician, he understands harmony and balance in music,” says Luo. “He helped the orchestra achieve a graceful elegance that is precious in a traditional Chinese music performance.” 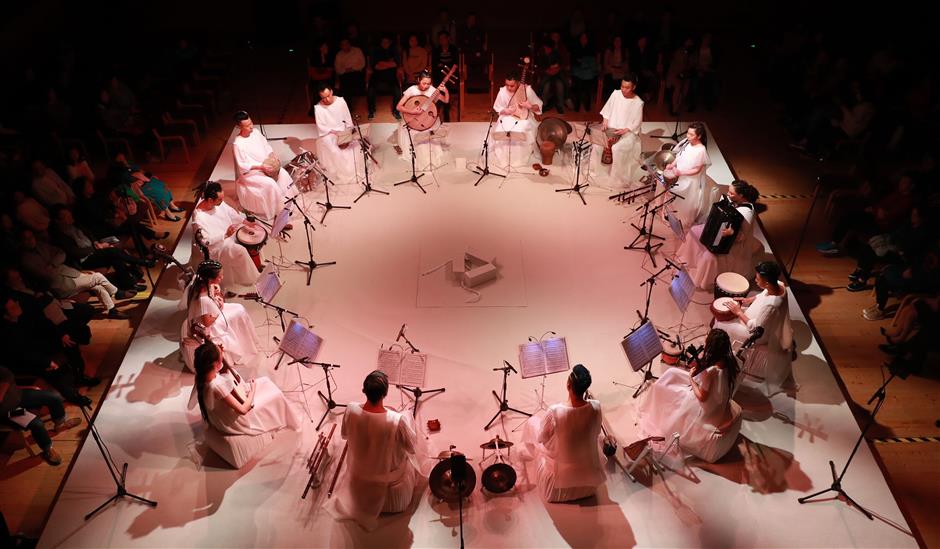 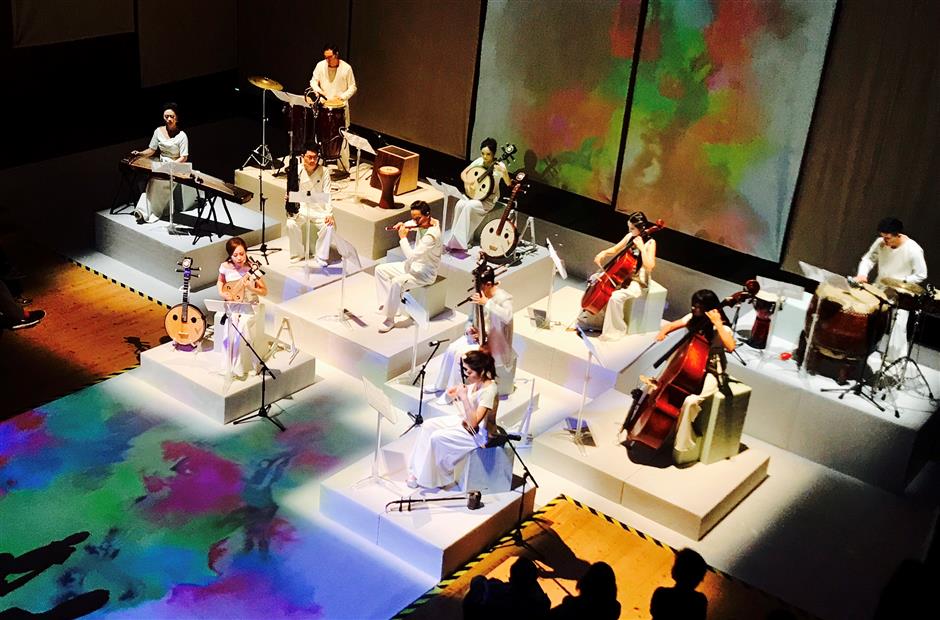 Apart from grand works, the orchestra has also been undertaking a series of smaller, more intimate programs designed to be more accessible to ordinary people.

In that vein, the Sinan Art Salon featured a collaboration between traditional Chinese music and other traditional art forms like calligraphy, embroidery, tea ceremony and incense burning. A multimedia program called “Gardenias Are Blossoming” features works by young musicians.

Though open to innovative crossover creations, Luo is careful that new ideas don’t blur the soul of traditional Chinese music. There is a fine line, she says, between creative development and overuse of borrowed elements.

“It is never safe to innovate, but it is even more dangerous not to in our era of rapid change,” says Luo.

Fortunately, the recent innovations have helped the orchestra to expand its market. Tickets to many of its special musical events are sold out weeks before performances. The “New Oriental Chinese Music Scene” constantly receives invitations for overseas performances.

“It was the worst of times when we were up against competitors like movies, TV and video games,” says Luo. “And it’s the best of times when people today are more willing to accept traditional music in the search for peace of mind.”