Yan Jingshu has been working as a book conservator at Zhejiang Library all her life, for 37 years. She just retired before the Year of the Pig arrived.

On a warm winter’s morning, when Shanghai Daily visited the two-story red-brick building where Yan and her colleagues work, the room was quietly soaked in sunlight.

The beauty and bustle of West Lake was just a few steps away. Push open the door leading to the balcony, and you can see the boats cruising on the lake, even the calmly glittering waves.

The white building (left) of Zhejiang Library stores mostly ancient books, while the conservation center is on the second floor of the red building (right).

But no one paid any attention. Their eyes had been fixed on one single page lying in front of them under the light.

Yan and her colleague Wang Fan were fixing a handwritten genealogy book. All the pages in the book had been dismantled and piled up in order. The page that needed to be restored was placed on its reverse side.

A spray bottle was used to soften the paper, and creases and tears were first carefully flattened.

Then they tore a strip of wood fiber paper and attached it to the torn area with diluted starch paste.

“We should be thankful that these pages were not written on the back, otherwise it would be very hard for us to work on,” said Yan.

A great many ancient books that conservators work on are thread-bound, where a large single-printed sheet is folded in half and stitched at the edge with the written part shown on the outside.

Restoration applied to each book may vary, but there is one thing that every conservator must observe: No drinking cups on the worktable.

The cups are gathered instead in a corner near the entrance. This area was like a kitchen with an induction cooker, a pot, bowls filled with natural dyes which looked like some kind of soy sauce, and also paper that had been dyed to copy the color of the aged pages.

The “range hood” hanging above the table was actually used to remove water from the book when it was being cleaned.

Yan said the book they were working on was in a fairly well-preserved condition. Sometimes when a book has been soaked in water, and shrunk into a compact solid with pages tightly adhering to each other, they would put it in a steamer to allow pages to soften and be separated using tweezers.

Paper is an extremely vulnerable material and needs to be handled with extra care and attention. Yan said that in south China paper would be more easily affected by dampness, while in the north it would become brittle and fragmented.

Storage methods are also different. People in the north will place a series of books in a folding case before they stack them on the bookshelf. But in the south, the books are protected by two wooden covers at front and back, tied with ribbons at the spine.

The covers are usually made of camphorwood, whose aroma may keep insects away. 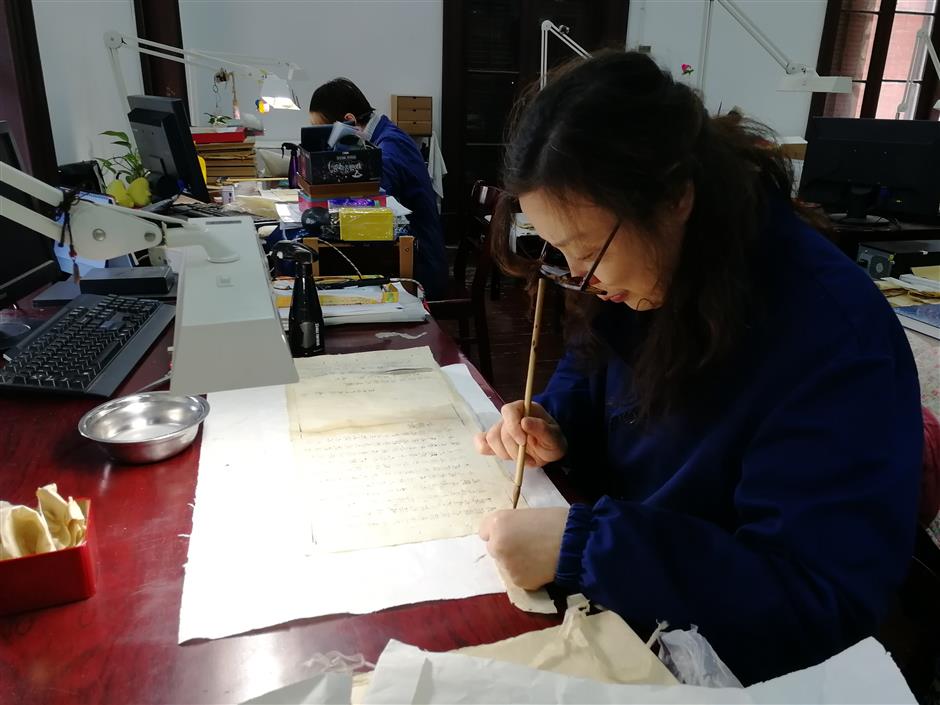 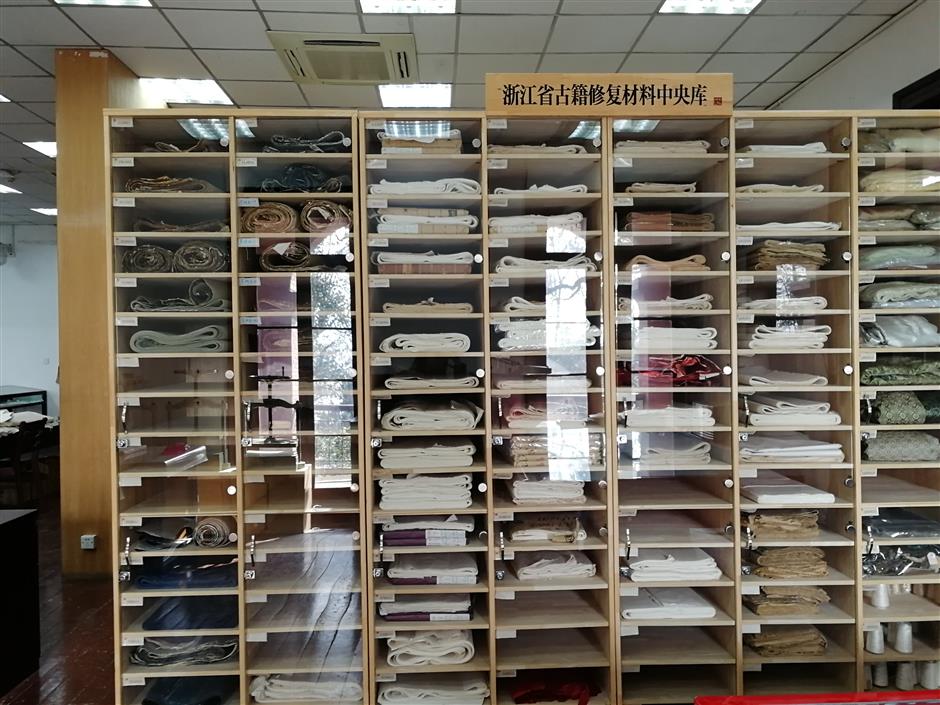 The conservation center has over 200 types of handmade paper and fabrics for mending ancient books.

Zhejiang Library owns over 1 million ancient and rare books and publications, which include more than 830,000 thread-bound books from the Southern and Northern Dynasties (AD 420-581) to 1949.

“Our collection features many rare woodblock-printed books during the Ming Dynasty (1368-1644) and also hand-written copies from late Qing Dynasty (1644-1911) to 1949, including manuscripts of the 18th century scholar and gastronome Yuan Mei and the modern revolutionary Zhang Binglin,” said Tong Shengjiang, deputy head of the library’s ancient books department.

One of its most well-known series is probably the Siku Quanshu, or the Complete Library in Four Divisions. It refers to a collection of more than 36,000 books gathered in the 18th century during the reign of Emperor Qianlong.

The emperor commissioned eight copies of the collection and kept them separately in eight specially built libraries in north and south China. The one in Zhejiang Library is the only one in the south.

The majority of these ancient books are stored in a white building next to the conservation center. More than 140,000 rare editions are housed in a basement on Shuguang Road in conditions of constant temperature and humidity.

Tong said more than a third of the collection needed some kind of repair. But they took a very cautious attitude toward restoration. Those that needed urgent repairs were prioritized.

Six people work at the conservation center, finishing at least 11,000 pages of damaged books every year. 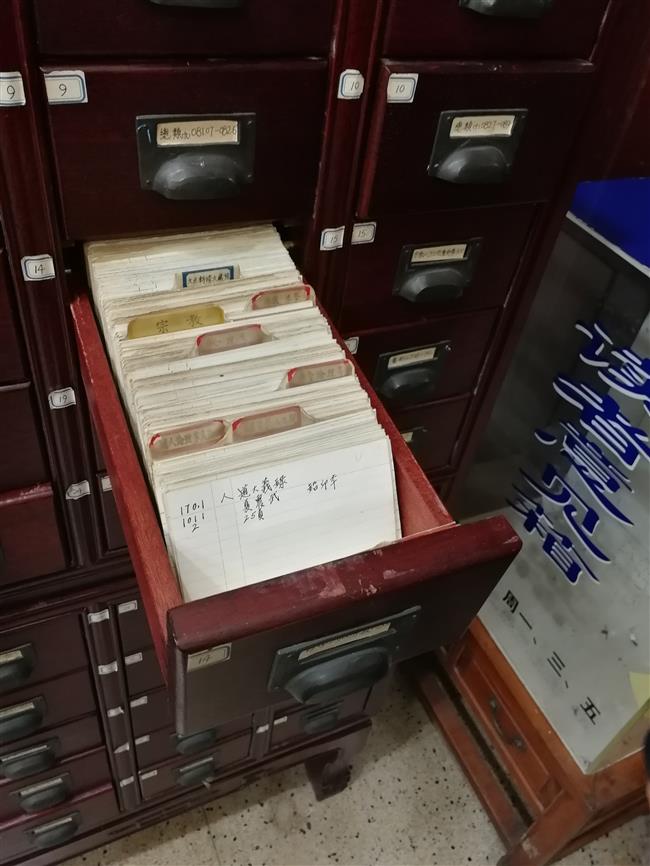 To restore a book to its previous status is a slow task. Mending is only one of the dozen steps that a damaged book needs to go through. After it has been cleaned, mended, flattened and rebound, it will be pressed in a specialized flatting machine for a month.

“Usually, I can fix three to four pages a day; but there are also times when you can’t complete one page in two or three days,” conservator Wang Fan said.

She pointed to a Ming Dynasty sutra and said that in this case she had to smooth out the surface bit by bit and put every line on the illustration back in place.

Wang, who is in her 40s, started work at the center in 2007 after taking a recruitment exam.

She said conservation was lonely work. And she always told her students that if they had no real passion for it then not to consider it as a career.

But every time when she saw a badly damaged book become readable again, she felt the greatest fulfilment.

“A repaired book is like my child. You know sometimes even when I meet them again in the warehouse or from the owners, I will be very happy if they have been kept well,” said Wang.

She treats old books as equal living entities. “If you mend a book in a casual way, in the end you will find that it retaliates, for example it cannot be closed evenly,” Wang said.

“Zhejiang has a splendid history in printing and publishing. In 2018 we took our collections to Paris, and the exhibition was very well received. This year we hope to bring them to more places,” said Tong.