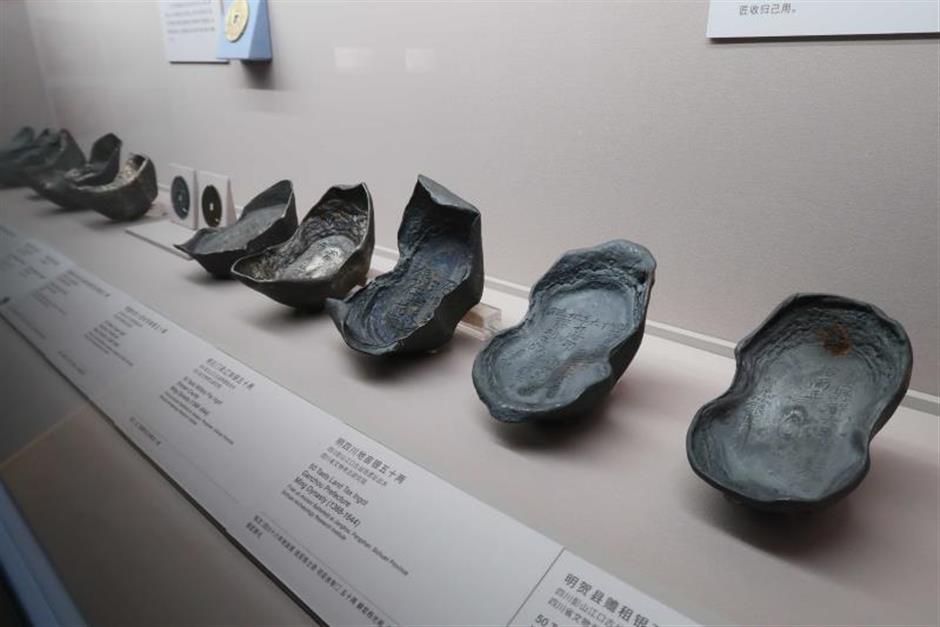 Some 50-tael land tax ingots evacuated from a Jiangkou site in Sichuan Province, an ancient battlefield by the Minjiang River.

How did the ancient Chinese people use silver as a currency? The answer lies in an exhibition titled “Silver in the History of Chinese Currency.”

In China, the casting and use of silver can be traced back to the Eastern Zhou period (770-255 BC).

“Ting,” known as the earliest form of silver currency, came into being in the mid-Tang Dynasty (AD 618-907), while silver ingots began to play a more significant role in the Song Dynasty (960-1297).

Since the mid-Ming Dynasty (1368-1644), silver had functioned as a predominant currency and the silver standard monetary system was fully established during the Ming and Qing dynasties.

“Silver has a profound influence on the history of Chinese currency and social economy,” said Yang Zhigang, director of Shanghai Museum. “Although the development of silver as a Chinese currency was influenced and constrained by global factors, it actually stimulated China’s domestic economy, social advance and reinforced its connections with the world.

“The current exhibition aims to display silver in various monetary forms and reveal a vivid picture of silver in the history of Chinese currency and its vital position in linking China with the global world.”

The European age of exploration witnessed the opening up of global maritime trade. A steady and huge drain of silver flooded into China in exchange for local products and greatly met the demand in its currency market. The ample supply of silver promoted the growth of a handicraft industry and export trade.

As a result, the economy bloomed in some important industrial and financial centers, as well as the coastal cities during the Ming and Qing dynasties. The exhibition demonstrates the prosperity of maritime economy in which silver had historically been linked to trades across the regions and beyond the oceans.

One highlight of the exhibition is the sunken silver from a Jiangkou site in Sichuan Province, an ancient battlefield by the Minjiang River.

A ship loaded with silver treasure belonging to Zhang Xianzhong (1606-47), leader of a peasant revolt active in Sichuan, sank in bad weather on the river in 1853. Since 2016, two archeological excavations on the site have been conducted, unearthing over 40,000 items.

It is the most important and largest silver discovery from the Ming Dynasty, with over 300 government ingots in 50 taels, thousands of small ingots and broken silver.

Most government ingots bear inscriptions of date, place, weight, workshop and tax information, some of which are also incised with the names of the official supervisors.

In the mid-Qing Dynasty, there was a massive outflow of silver out of China.

The circulation of foreign banknotes forced the Qing government to create a national bank to issue its own banknotes, but this did not make China shift from a silver standard to a more advanced monetary system.

There had been a complicated situation in which traditional silver ingots, new silver dollars, copper coins and bank notes coexisting in the market, featuring designs that may grab the modern interest of the visitors. 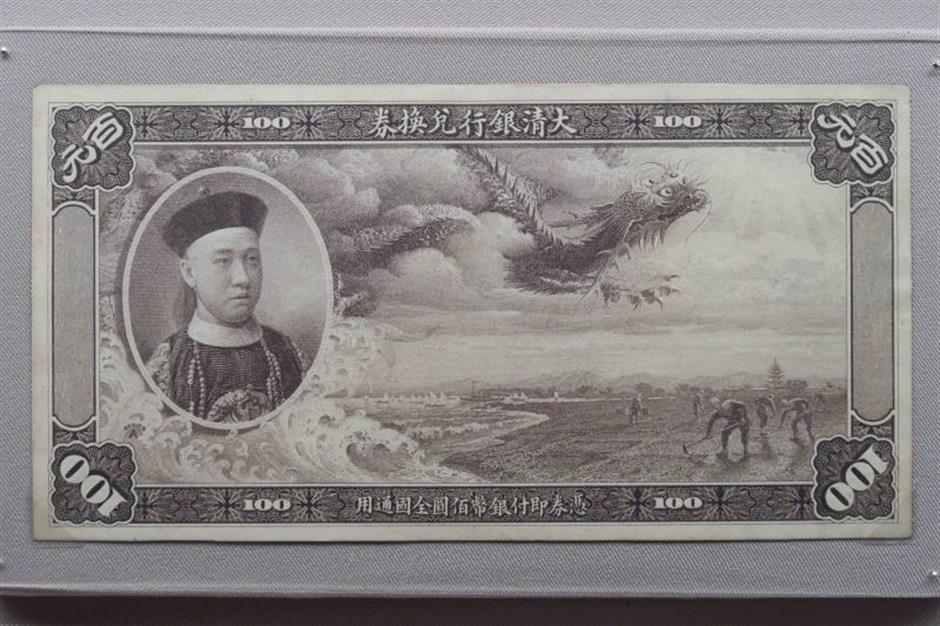 A 100 yuan banknote issued by the Qing Dynasty. 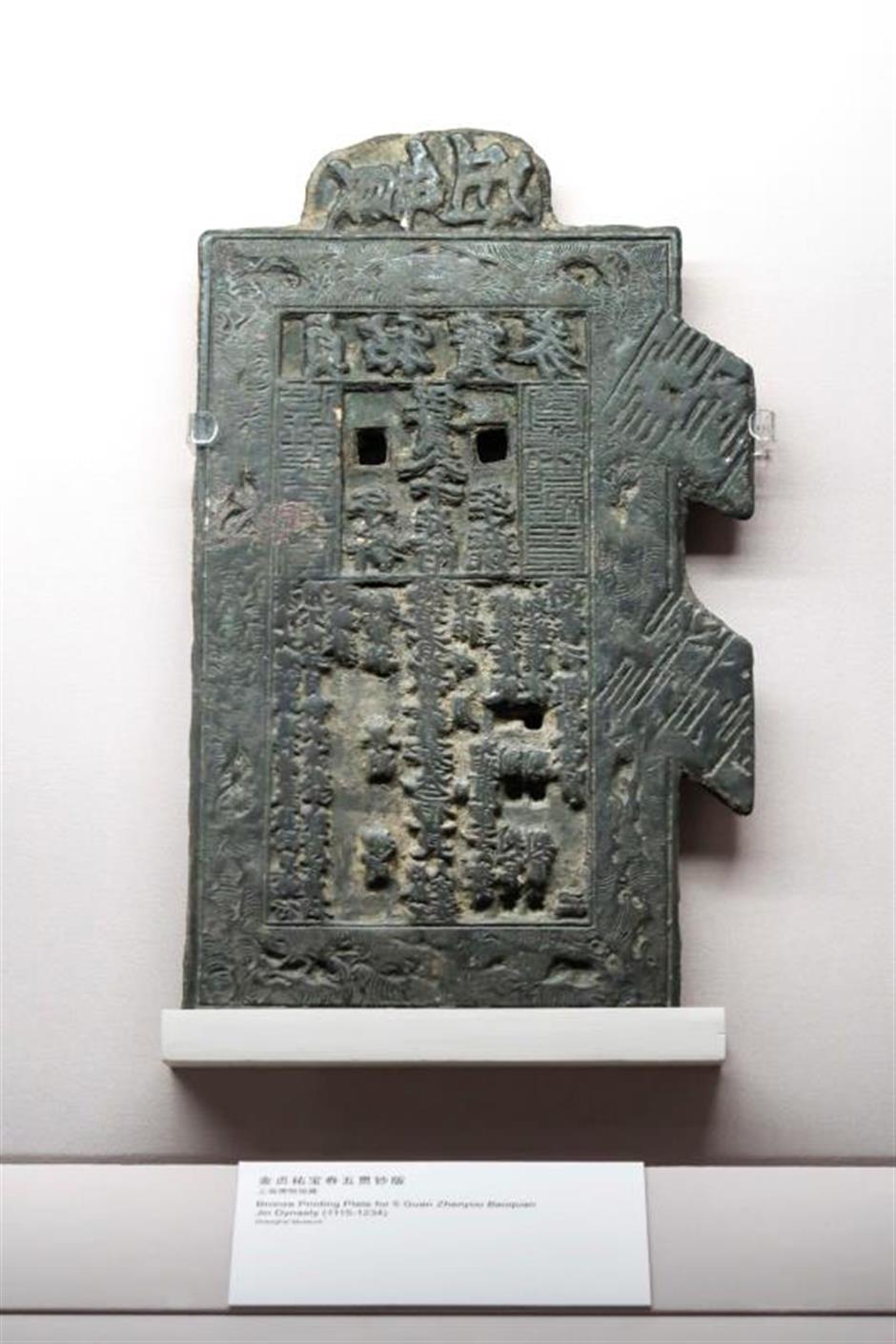