Performance doesn't have to be high art to bring people happiness

Stage performances don’t come only from professionals who live in the upper echelons of art. They also come from local communities of amateurs, and that’s what China’s Qunxing Award recognizes.

The nation’s top award for amateur talent is part of the China Art Festival, which closes its 12th season on Sunday. The two-week gala celebrates both renowned troupes and grassroots talent.

Shanghai has seven works in the finals for this year’s Qunxing Award, including the dance “Red Charm,” the musical “See Myself,” and the instrumental performance “Harmony.”

Divine dancing in a world of silence

The dance “Red Charm” symbolizes the spirit and determination of the Chinese people. 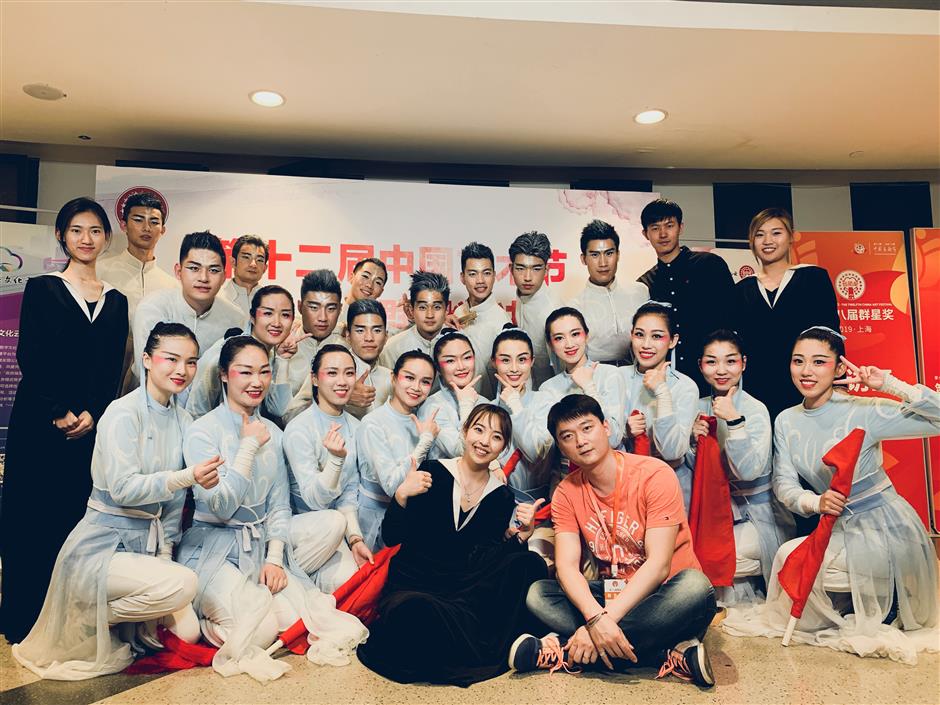 Yu Qinxin and her dance ensemble break the boundaries of deafness.

Yu Qinxin, 30, who choreographed “Red Charm,” said the process was more important than the result.

“Our group members, ranging in age from 18 to 36, all have their own jobs, such as cooks, designers and clerks,” Yu said. “In the weeks leading up to the competition, we rehearsed every day. They rushed to the rehearsal venue after work and then went to homes often far away.”

To thumping rhythms, male dancers flap red fans, while female dances hold red tassels. It’s a combination of modern and classical dance, symbolizing the spirit and determination of the Chinese people. And no one exemplifies that better than the 21 dancers themselves, who are deaf or hearing impaired.

Prompters wearing black clothing and white gloves stand in the stage shadows, signaling the musical tempo with their hands. Except for Yu, all the prompters also suffer from some degree of hearing loss.

“The audience’s focus is on the dancers rather than the prompters,” Yu said. “That’s how it should be. We don’t want to elicit sympathy by flaunting their disability.”

The dance is punctuated by performers loudly shouting “ha!” That was added toward the end of rehearsals to express the ambitious emotions of the troupe. For people living in a silent world, it is not easy to speak, let alone shout.

“At first, many of the women dared not make a sound because they didn’t know if their voices were pleasant to hear,” Yu said. “I kept encouraging them until they developed self-confidence.”

Compared with normal dancers, the deaf performers have to spend three or four times more hours on practice. They need to learn and remember both their own movements and those of the other dancers.

Yu began learning dance when she was 4 years old. In 2008, she was a volunteer at a disability arts festival. Knowing no sign language, she could only smile at the hearing-impaired performers.

“The experience sowed a seed in my heart,” she said. “I realized I wanted to work on something meaningful in the future.” 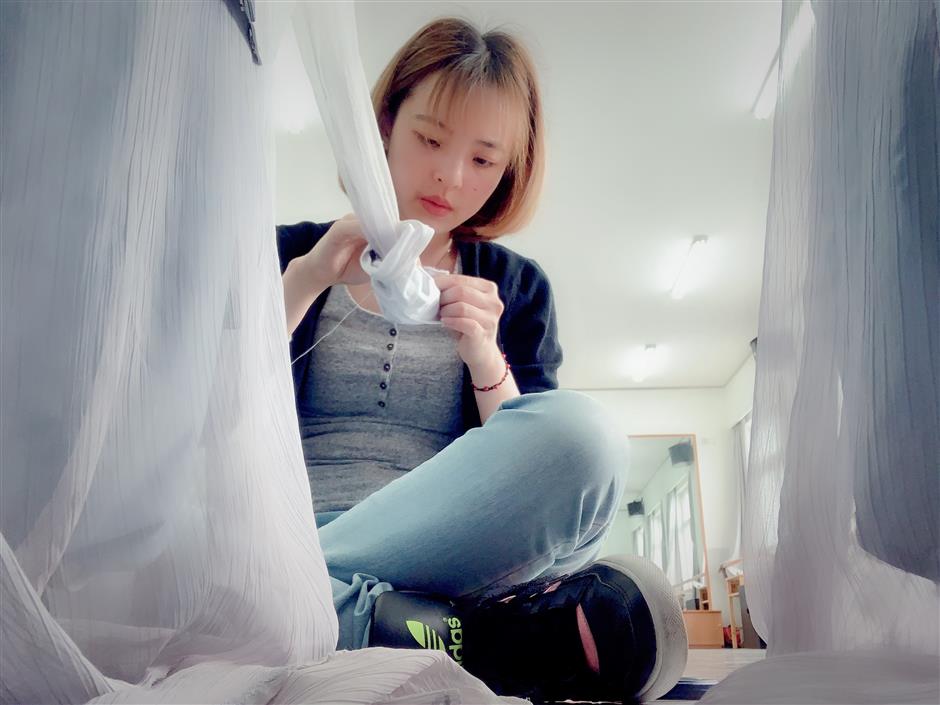 Yu graduated from Shanghai Theater Academy in 2011, and worked as a dance teacher at the Shanghai Youth Technical School for the Deaf. She learned sign language.

“It took a long time to build trust with them,” she said. “In the beginning, I found it difficult to enter their world. Once I developed a deep connection with them, I could feel their enthusiasm and positive energy. I really admire them.”

She added: “Of all the dressing rooms backstage, ours is always the quietest. I am used to the tranquility.”

Unlike professional troupes with ample manpower and financial support, grassroots amateurs have to rely on less. Yu is in charge of altering costumes, carrying props and even buying beverages and snacks for the performers.

Love-hate relationship between mothers and daughters 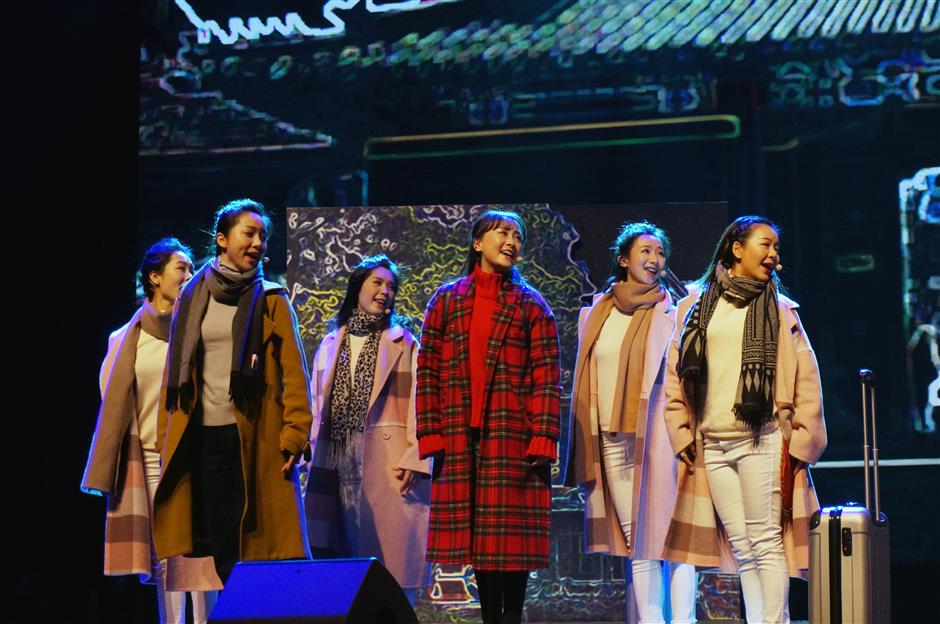 The musical “See Myself” resonates with audiences because it is drawn from the daily experiences of family members trying to understand one another.

Another finalist for the Qunxing Award is the musical “See Myself.”

“To be honest, the boundary between professional troupes and the grassroots groups becomes blurred,” said Luan Lan, 45, director of the musical. “I maintain a professional attitude toward performances for the masses.”

Luan, who works on the staff of the Shanghai Mass Art Center, said the two biggest differences between amateur and professional performances are theme and length.

“The themes of works for the masses are intimately associated with people’s everyday lives, and the works are shorter,” Luan said.

“Performances competing for the Qunxing, for example, can’t be longer than 15 minutes. It is hard to tell a story clearly in such a short time.”

“See Myself” mainly revolves around a mother-daughter relationship — a theme that certainly resonates with many audiences.

“I wanted to make a phone call to my mother,” said an elderly member of audience after watching the performance.

Luan drew on experiences with her own mother in crafting the musical. For example, the mother in the performance keeps taking food from dishes on the table and putting it into the daughter’s bowl, a common way that Chinese parents show love for their children. But the daughter is trying to lose weight and balks at any additional food.

“All the emotions expressed in the performance are real,” said Li Li, 37, co-director of the musical.

“We wanted to convey our understanding of life to the audience.”

Two days before the finals, Yu Yan, who plays the role of the daughter named An Jing, spoke no words in order to save her voice. The 36-year-old woman is a veteran performer and the mother of a 5-year-old girl.

“My mother watched the performance and phoned me to say that the quarrel portrayed in the show is exactly how it happens in real life,” said Yu.

During one rehearsal, she couldn’t help crying.

“Since leaving my hometown, I haven’t had a really good conversation with my mother for years,” Yu explained. “She sometimes comes to Shanghai to visit me, but we always end up quarreling after a few days. One day, my father sent me a photo. Only then did I realize that my parents’ hair had turned completely white. I have missed a lot.” 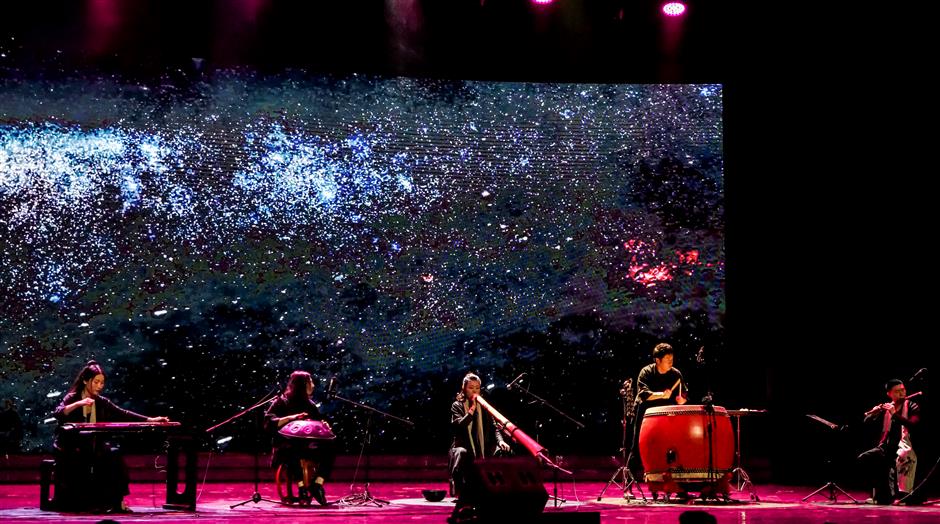 The performance “Harmony” features both modern and ancient instruments from China and abroad.

A third finalist for the Qunxing Award is the instrumental performance “Harmony.”

Composed by Sun Binbin, it features both modern and ancient instruments from China and abroad, including the Swiss hang, also known as hang drum; the didgeridoo of Australian Aborigines; the African nutshell shaker, which emits a sound reminiscent of flowing water; and Chinese musical instruments like the da tanggu drum, bamboo flute and guqin, a seven-string zither.

“We aim to present internationalized Chinese music,” said Shi Lei, one of the musicians.

Most of the rare musical instruments have been collected by Shi and his wife Wang Mengying. He plays the hang and she plays the didgeridoo in the performance. 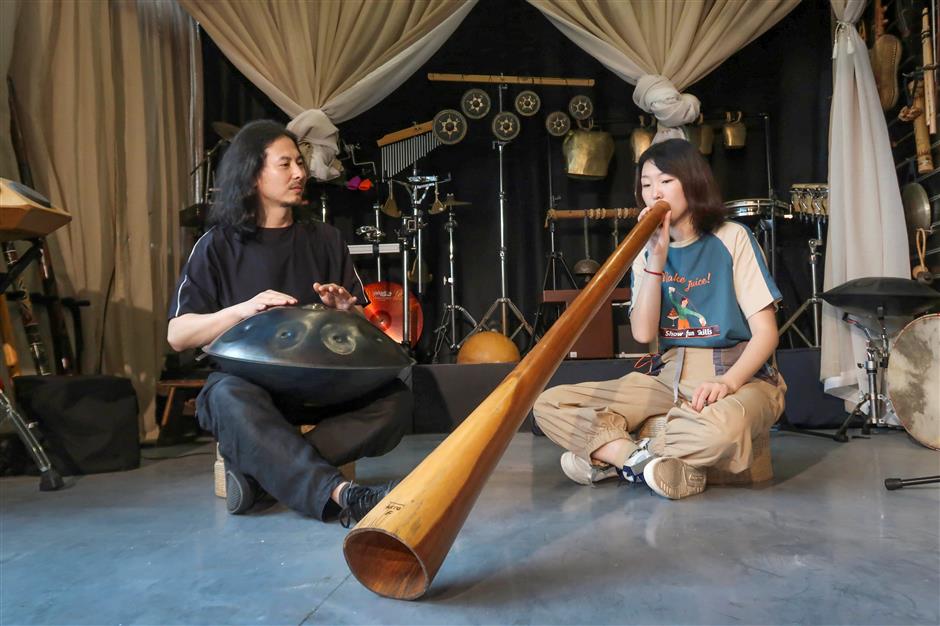 Shi Lei and his wife Wang Mengying play the Swiss hang and the didgeridoo in their studio-museum.

The traditional Aboriginal wind instrument, dating back more than 1,000 years, has a deep, resonant sound, which Sun described as “the sound of the earth.” The long, wooden instrument was originally made from fallen eucalyptus limbs naturally hollowed out by termites in the Outback.

Traditionally, only men play the didgeridoo during ceremonial occasions. Female didgeridoo players do exist, but their playing takes place in an informal context and is not specifically encouraged by Aboriginal elders. According to Wang, playing the instrument is believed to affect a woman’s fertility.

“Every musical instrument is embedded with local culture,” she said. “Many traditional instruments are disappearing in different corners of the world. We are trying our best to keep them alive.”

As a staff member of the Mass Culture Center in Changning District, Sun said she heard about a local family of music enthusiasts and decided to search them out. She visited Shi and Wang in their studio-museum.

“I was stunned by the diverse and rare musical instruments they had,” she said. “An idea quickly came to my mind. Maybe we could put some of the instruments on stage to acquaint more people with their existence.”

Sun said musical compositions have to be melodious to attract the attention of the general public.

“Many audience members come to see the instruments after the show. And some of them even ask us whether they can join our ensemble,” said Sun. “For us, their involvement and the interest in music is the most positive feedback.”

Neither Shi nor Wang is professionally trained. The couple said that they learned to play the musical instruments by themselves, using their imagination.

“We have played music for 20 years,” Shi said. “We taught ourselves to play all the instruments. Music doesn’t have to be high art, appreciated only in concert halls. It can be composed, performed and appreciated by ordinary people. The true meaning of music is in providing happiness to people.”

The couple’s two sons, aged 7 and 10, are following in their parents’ footsteps, learning to play various musical instruments at home.