Threat to lace craft being a fabric of the past

Since Italian Catholic missionaries brought European lace-making techniques to Xiaoshan District a century ago, locals have enriched the original patterns and stitches by turning it into a Hangzhou specialty with its own style.

Kanshan Town was center of the lace making business in the 1970s, when around 200,000 people worked in the industry, a pillar of the local economy. However, the industry declined like other crafts and today there are only eight people involved. Xiaoshan Lace Factory, which employed 1,500 workers, closed in the late 1990s.

Zhao Xixiang, 84, has been making lace for more than 60 years.

In the 1960s, Zhao came up with a new style that integrated lace with Taizhou embroidery from Zhejiang Province.

Silk is too fragile to make lace, so Zhao sewed embroidered silk cloths and lace together.

The embroidery is white while the lace section is beige. The mixed hues give a deceptive 3D effect. 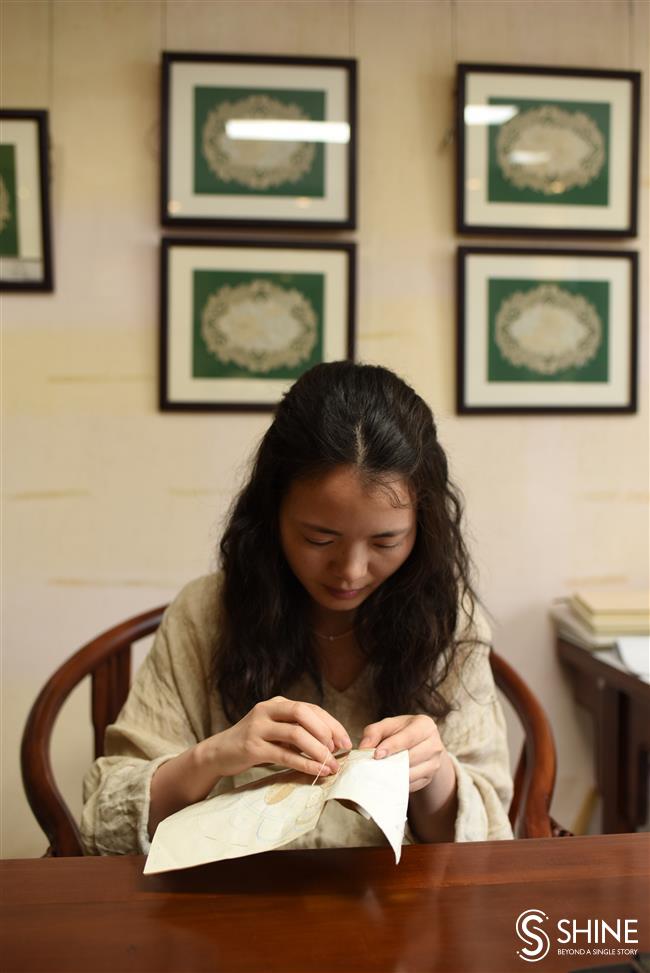 A bedspread on display at China Crafts and Art Museum was made this way. Zhao spent the whole year of 1964 crafting the piece.

The chrysanthemum and grape patterns were recreated in 16 different ways, presenting a harvest scene in early autumn.

When US President Richard Nixon visited Hangzhou in 1972, the then humble airport was decorated with an ornamental lace curtain measuring 18.6 meters by 6.8 meters featuring a panoramic view of the West Lake. The curtain was made by Zhao.

He recruited four apprentices and signed a contract with the government, promising to hand down his expertise for a five-year term.

However, the results were not good.

“Only one is still making lace. The others are doing different things because the reality is, it is hard to make money making lace,” Zhao told Shanghai Daily. “It takes a whole year to make a lace bedspread and it only sells for 4,000 yuan (US$580).”

“The income is far lower than my previous job, but traditional crafts cannot be valued in money,” Fu told Shanghai Daily.

Zhao is worried about the future of Xiaoshan lace. Except for his two apprentices, only five old women in Xiaoshan thread lace.

“I will not blame my apprentices if they give up. Frankly speaking, they cannot make a living on lace making and need money to support a family,” Zhao said.

Zhao is now organizing documents and materials to publish a book.

After more than 100 years, locals have expanded the original three or four stitches to 35 and have produced 1,000 kinds of lace.

Today, only Zhao and the five old women have mastered all 35 methods. Fu is trying to learn the most difficult, already having spent more than a year learning the basics.

“Modern machines have replaced handmade methods, but they can only produce simple patterns. The most delicate lace is still made by hand,” said Fu.

“Machines can never be a substitute for skilled hands.

“The handmade version has smooth outlines and vivid patterns. Different stitches are distinguished from each other.

“On the machine version, borders between different patterns are blurred.” 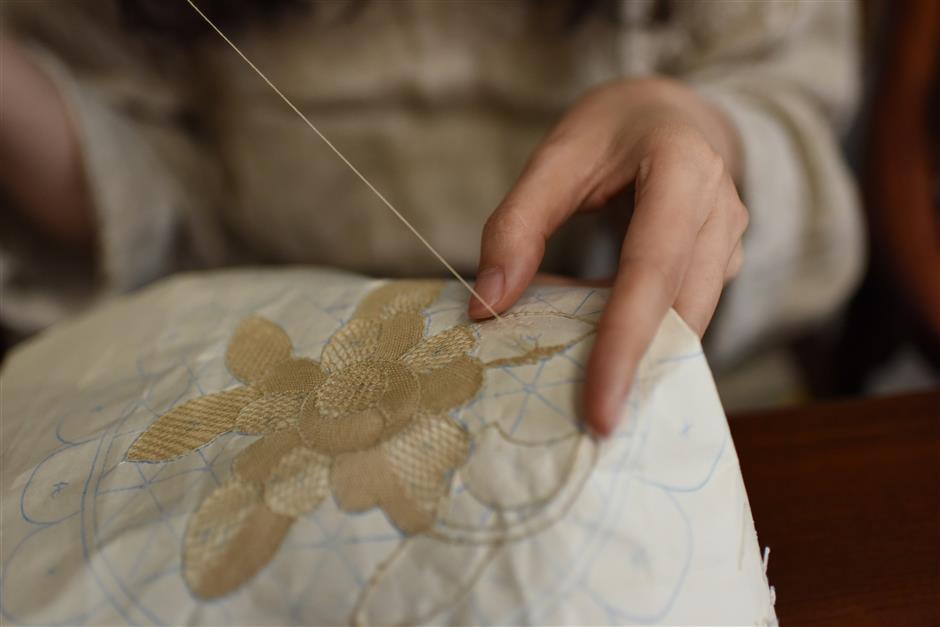 Different stitches are distinguished from each other.

Nonetheless, no one is willing to spend a large amount of money to buy a piece of handmade lace. The market has shrunk to almost zero.

“The only demand for handmade lace comes from museums,” said Zhao. “Old craftswomen and Fu help me sew them. “People now only see this in exhibition halls. That is a pity for the industry.”

In an effort to preserve tradition and popularize the craft among visitors, China Crafts and Art Museum has carved out a year-round exhibition space for lace-making techniques.

Fu works in the museum and sometimes hosts classes for children.

“Xiaoshan lace is less popular than other crafts in Hangzhou. When I was sewing on the spot, most visitors thought I was doing paper cuts or embroidery,” Fu said.