The nation's best young musicians are in concert 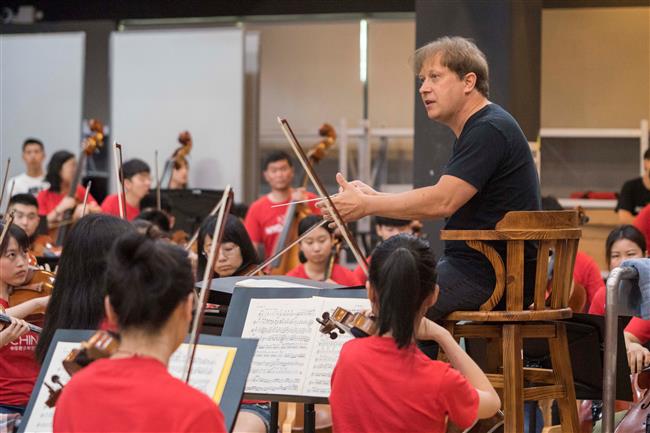 Conductor Ludovic Morlot working with young artists at a rehearsal in Shanghai.

The National Youth Orchestra-China will have its 2019 concert debut at the Shanghai Oriental Art Center on August 1, featuring Ludovic Morlot, principle conductor of the Seattle Symphony, and American pianist Garrick Ohlsson.

Some 100 students are currently taking part in full orchestral rehearsals with Morlot, as well as sectional rehearsals and private lessons with NYO-China’s suite of teaching artists.

In 2014, Ye was commissioned by the Tianjin Symphony Orchestra to create a piece that represented the profound cultural heritage and forward-looking outlook of the city of Tianjin.

He drew inspiration from the various natural features defining Tianjin.

Multiple folk instruments from the region were also enlisted for the composition, which melded both traditional Eastern and contemporary Western sounds.

It’s NYO-China’s annual project for Chinese musical students aged from 14 to 21 years old. Launched in 2017, NYO-China aims to provide young Chinese musicians with a platform to communicate with the world.

According to Vincent Accettola, Managing Director of NYO-China, this year’s orchestra features 101 Chinese citizens from conservatories and attached middle schools in China and around the world, including those from Europe and North America.

With an average age of 18, they are among the most outstanding Chinese musicians of their age.

After the performance in Shanghai, NYO-China will travel to Germany and partake in Young Euro Classic, Europe’s preeminent festival for young musicians.

They will join a lineup that includes other esteemed youth orchestras, such as NYO-Germany and NYO-USA. They will then take the stage at UK’s Snape Proms and Italy’s Blozano Festival.

According to Accettola, the program is provided at no cost to students, with tuition, travel and housing expenses all covered.

“Our purpose is to gather the most promising Chinese musical talents, who can serve as ambassadors for both their country and their generation on a global stage,” said Accettola.