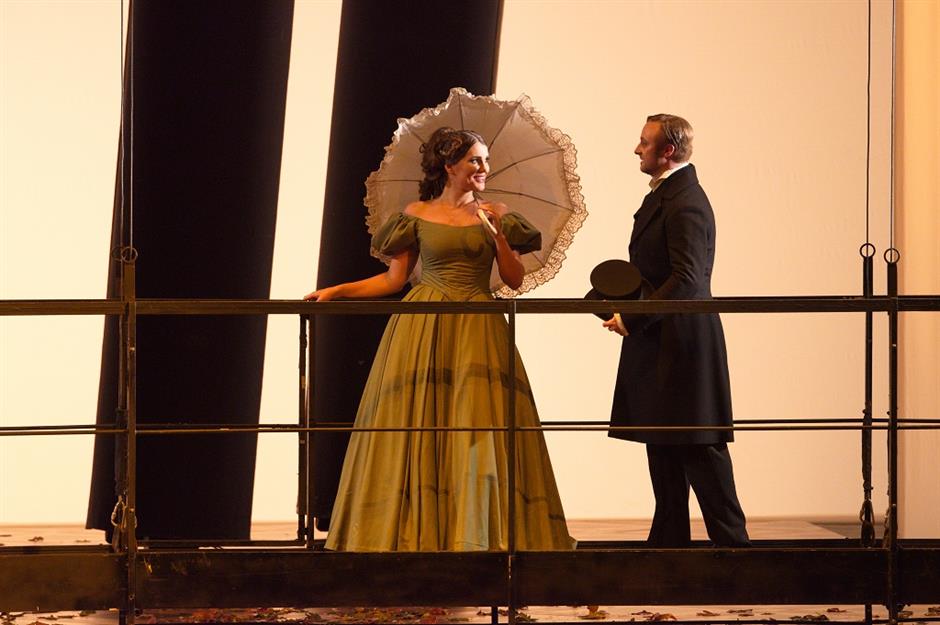 “Eugene Onegin” serves as the opening show to the Shanghai Grand Theater’s 2019-20 season.

Produced and performed by the Moscow State Stanislavsky and Nemirovich-Danchenko Music Theater, the performance serves as the opening show to the Shanghai Grand Theater’s 2019-20 season.

“Eugene Onegin” is based on a novel written in verse by Russian poet and novelist Alexander Pushkin.

It tells the story of a St Petersburg dandy who spurns the love of a young woman he meets. Years later, he comes across her again at a grand ball and realizes that he is in love with her. Married now, she spurns him.

The theater has brought a 200-member crew to Shanghai, which includes the performers, a symphony orchestra and a chorus.

The performance staged in Shanghai this week is a two-act version adapted from the original three-act opera. Director Alexander Titel has merged his own understanding of the classic tale into a new version, carefully describing the psychological changes of the characters.

“To connect a classic work to a modern audience, it can’t be achieved simply by changing the costumes or using modern stage settings,” said Titel. “You need to find a way to let the audience echo with the characters’ emotions.”

The stage setting of “Eugene Onegin” is simple — eight pillars in black and white colors.

“The story is simple, and the stage design has been simple from the beginning,” said Titel. “The black side of the pillars will remind you of the woods in Russia.”

Music director and conductor Felix Korobov described “Eugene Onegin” as a “quiet” and “private” performance which focuses on basic human emotions and the inner world of characters.

Actor Andrey Baturkin, who plays Onegin, says the difficulty lies in how to handle the pauses and “blank intervals” between singing during the performance.

“Onegin is a changeable role and I have to change myself accordingly as the story goes on,” said Baturkin. “He didn’t know how to love at the beginning, but started to feel love in the latter part. How to present that change is a challenge for me.”

Most of the actors and actresses are in their late 20s and early 30s, which is a young for opera performance.

“I want it to be a young opera, while the performers have to be confident and have a broad vision to understand and handle their roles. This is a well-selected crew,” said Titel.

The Moscow State Stanislavsky and Nemirovich-Danchenko Music Theater has a history of nearly 100 years. The theater’s first visit to China dates back to 1954 when it was invited by Chairman Mao Zedong for a four-month performance trip to Beijing. They performed “Eugene Onegin” and several other operas and ballets.

The opera is sung in Russian with Chinese and English subtitles.