Shanghai’s Changning District is rich in folk cultural resources, in particular, the Xinjing area of the district which is known as a “hometown of Chinese folk art.” This area is famous for Xijiao farmer painting and a number of folk arts. With the establishment of the Changning Folk Culture Center, a series of intangible cultural heritage practices have been protected and inherited.

Xijiao farmer painting is a member of Chinese folk art family. It originated from the western suburbs of Shanghai, and never stops developing amid the changing times and the progress of society. 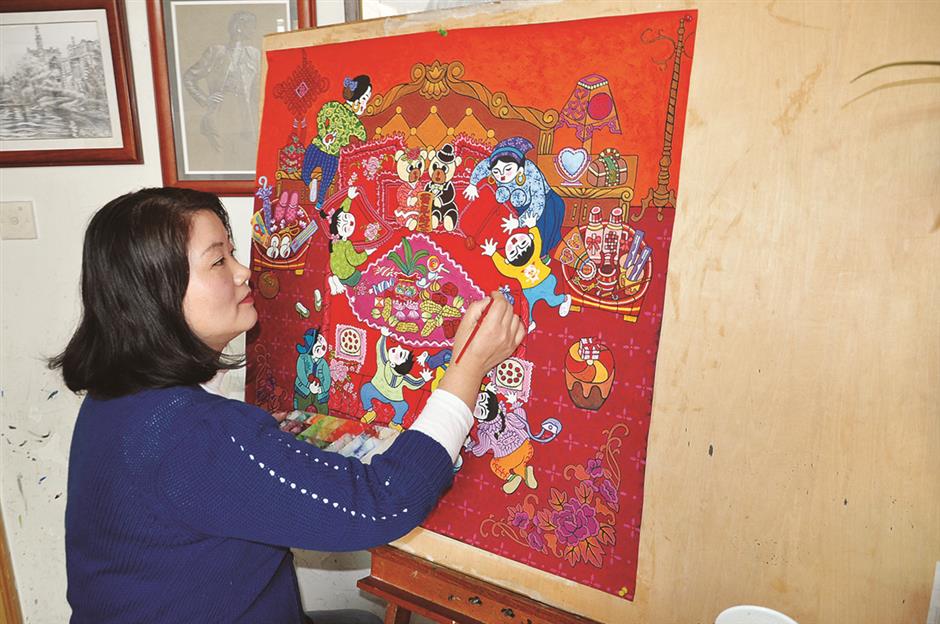 Hu Peiqun, a Xinjing native, works on a piece of Xijiao farmer painting. 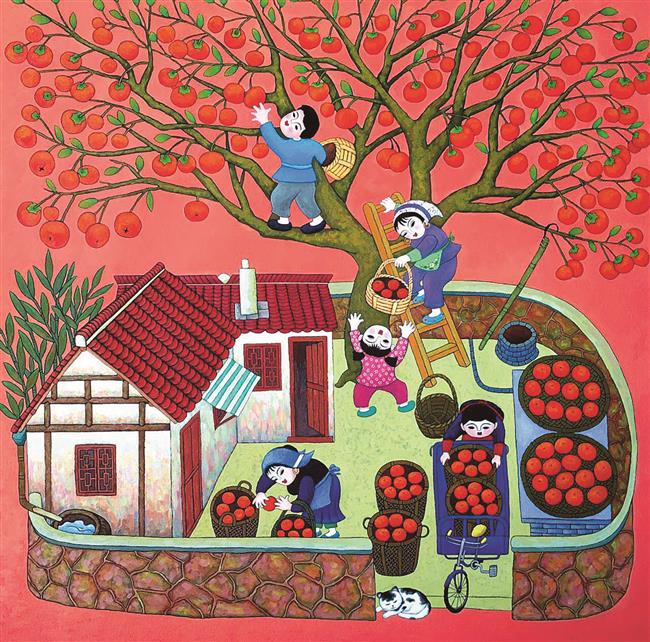 In the early Yuan Dynasty (1271-1368), with the innovation of textile technology by Huang Daopo (1245-1330) and the development and prosperity of textile production in Jiangnan, or regions south of the lower reaches of the Yangtze River, Xinjing area at that time became a sub center of textile production, and the Xinjing batik pattern in textile printing and dyeing was born. The subject of the pattern is typically the hand-painted New Year’s picture with the theme of rural life, work and family celebration.

In the Qing Dynasty (1644-1911), the area reached its heyday. After 1949, with the development of mechanical textile printing and dyeing technology, hand-painted New Year’s pictures gradually faded. However, Xinjing farmers did not stop painting. They fully displayed their drawing skills on the hearth of every household. At that time, the hearth paintings were brilliant. Rural women were also inheriting and innovating embroidery patterns.

In the 1970s and 1980s, farmers in Xinjing were no longer satisfied with only drawing kitchen paintings, embroidered designs and New Year’s pictures. They started drawing local customs and everyday farming life scenes on paper.

The inspirations of Xijiao farmer paintings come from rural fields, and gradually mingled with the epitome of urban development. The heavy strokes of the paintings show the artistic characteristics of Chinese ink-wash painting and Western oil painting.

Because of the achievements made in the development of Xijiao farmer painting, Xinjing Town was recognized by the Ministry of Culture as a “hometown of Chinese folk art” in 1993, 2008 and 2011. 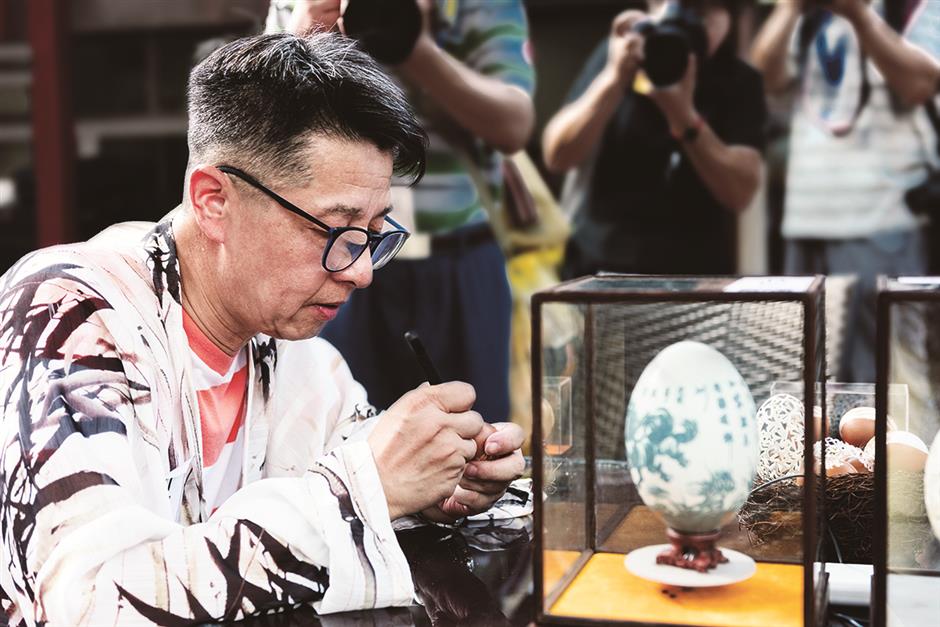 Li Yafei, a folk artist in Beixinjing, carves on an eggshell. 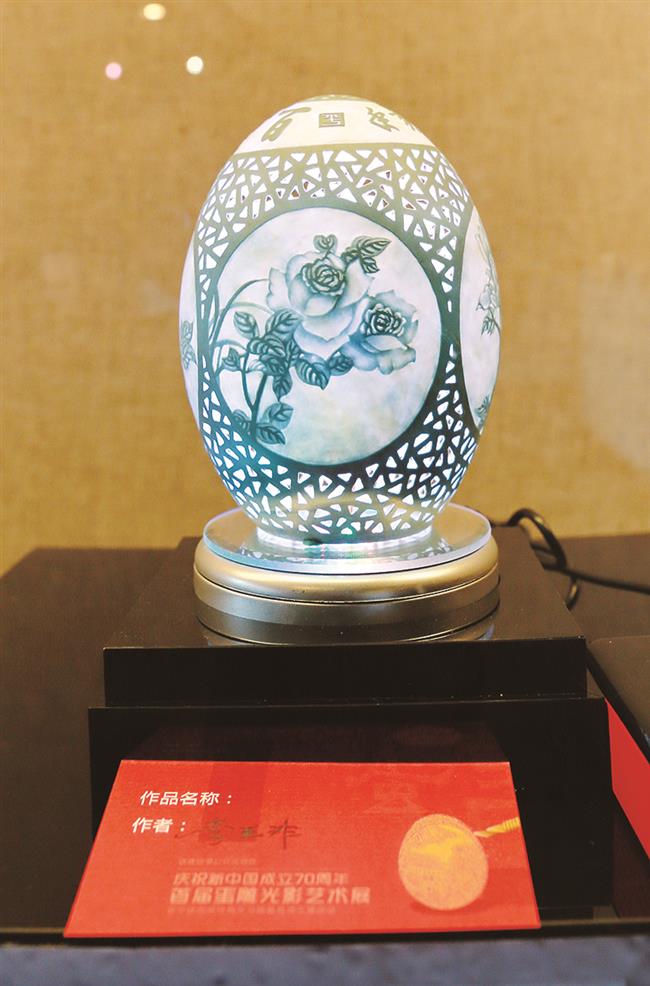 Xijiao farmer painting is not the only artistic highlight of the area. A folk artist in Beixinjing (or north Xinjing) is working on very rare carving techniques. Li Yafei carves on eggshells and leaves. He is also an inheritor of this most delicate art in Changning.

Eggshell carving has a variety of crafts. Li has his own way for carving eggshells after years of exercises.

Usually, Li empties the yolk and egg white with a syringe first and then draws a design onto the shell. He then uses carving tools to complete the rest of the work in an incredibly time-consuming and skilful process. The hardest thing is to avoid the eggshell cracking halfway, according to Li.

In addition to eggshell carving, Li is also a master of leaf carving, which is all about the delicate trimming of leaves to develop a picture or landscape. Chinar and poplar leaves are the most commonly used. 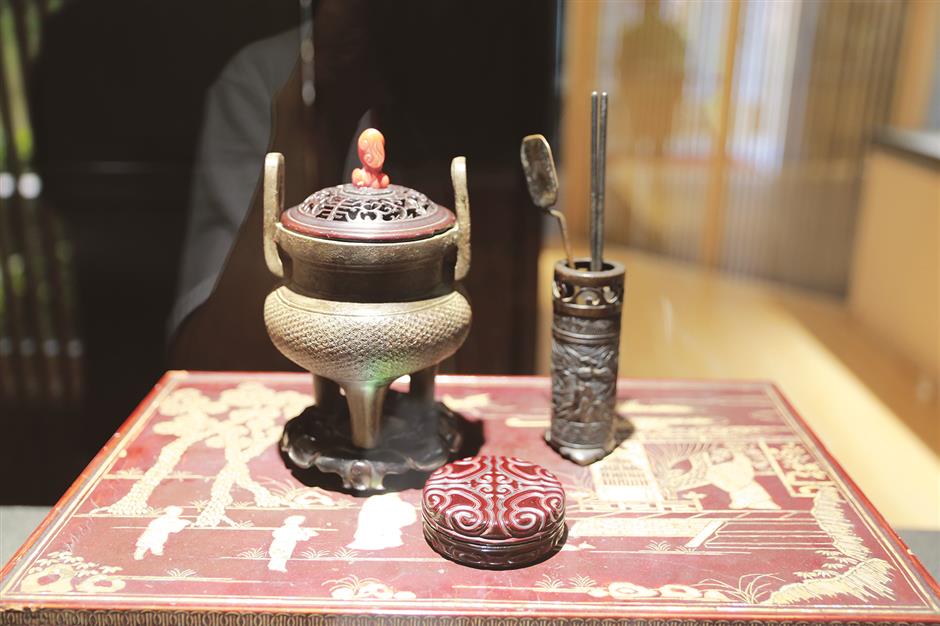 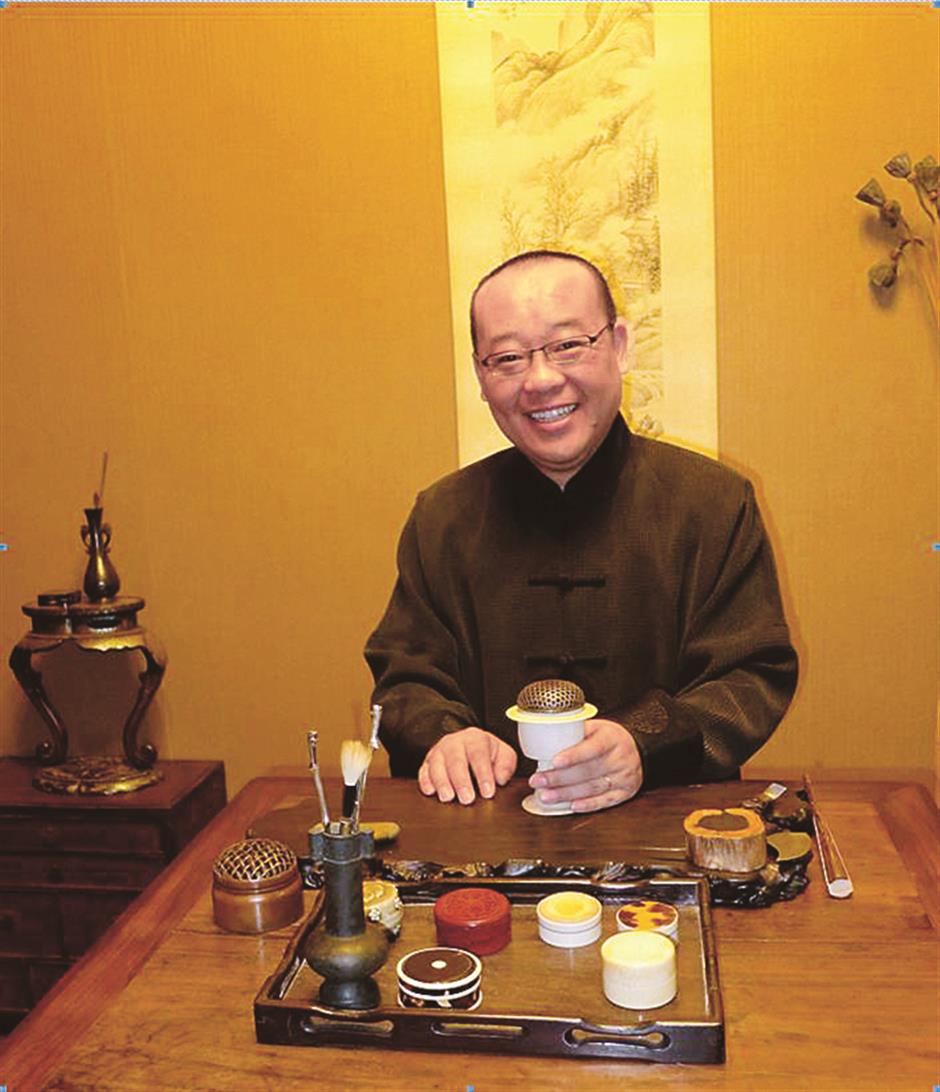 Wu Qing is an expert in incense culture.

An oasis among the high-rises

Not only in the Xinjing area, but throughout Changning District cultural activities are booming. This includes a pavilion of traditional incense culture in the New Hongqiao Central Garden, a haven surrounded by high-rise buildings.

As the first intangible heritage complex in Shanghai, the mid-lake pavilion exhibits incense burners, joss sticks and everything in connection with incense. There are also free courses and events.

Wu Qing, who heads the pavilion, is the only disciple of Liu Liangyou (1946-2006) in the Chinese mainland. Liu was one of the top incense culture masters in Taiwan. Wu is also an inheritor of the traditional art form in Changning, a professor with the Department of Archeology, Graduate School of Chinese Academy of Social Sciences and author of a number of books on incense culture.

Burning incense during worshipping is a long-standing practice in China. It is believed that burning incense brings people’s prayers directly to the deities above. It also helps meditation.

The “first incense” is the one first placed into a censer in the Lunar New Year. By lighting the first incense, people believe they are accumulating the greatest merit and therefore will receive the most blessings in the forthcoming year.

Joss sticks are made from powdered sandalwood and Chinese herbs. While making joss sticks, craftsmen dip bamboo sticks in water, stir them with mixed powders, and flap the sticks to make the powders stay on them. Later, craftsmen need to dye and dry these sticks before they reach the hands of believers for dedication to deities. 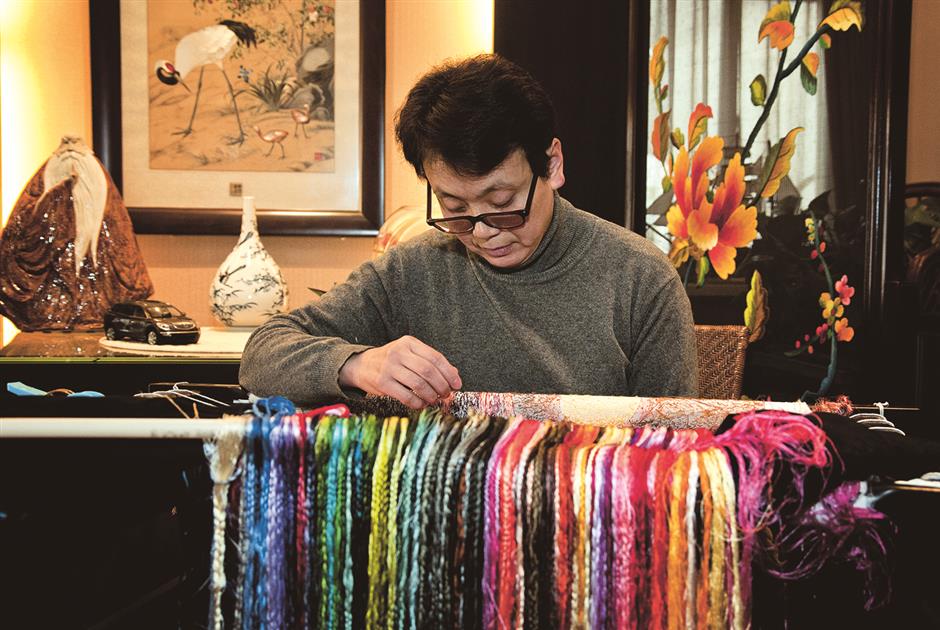 Changning native Ye Weina works on the embroidery. Using a combination of long and short stitches and a variety of colors, Ye reproduces masterpieces by Chinese and foreign artists. 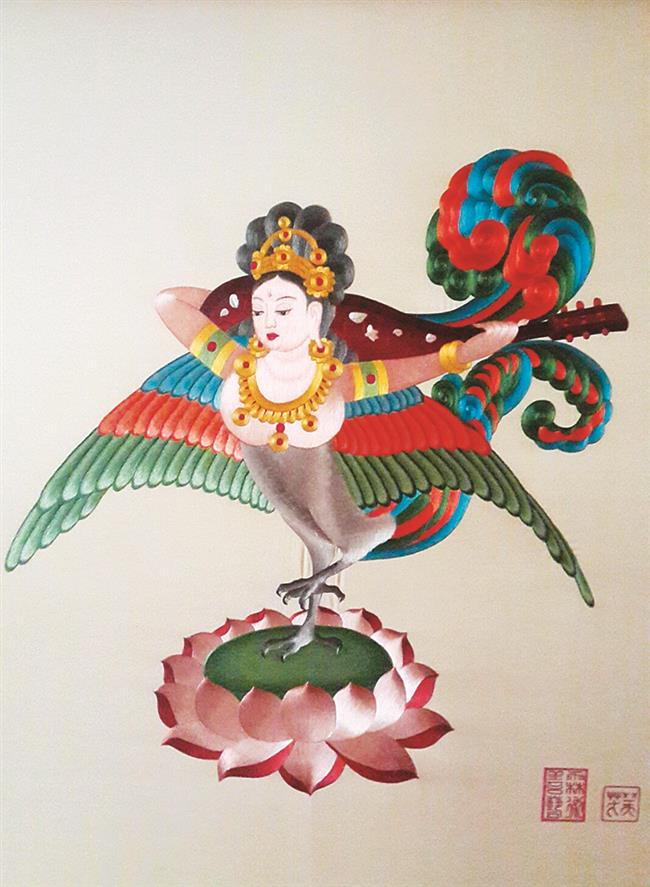 One of the embroidery works by Ye Weina 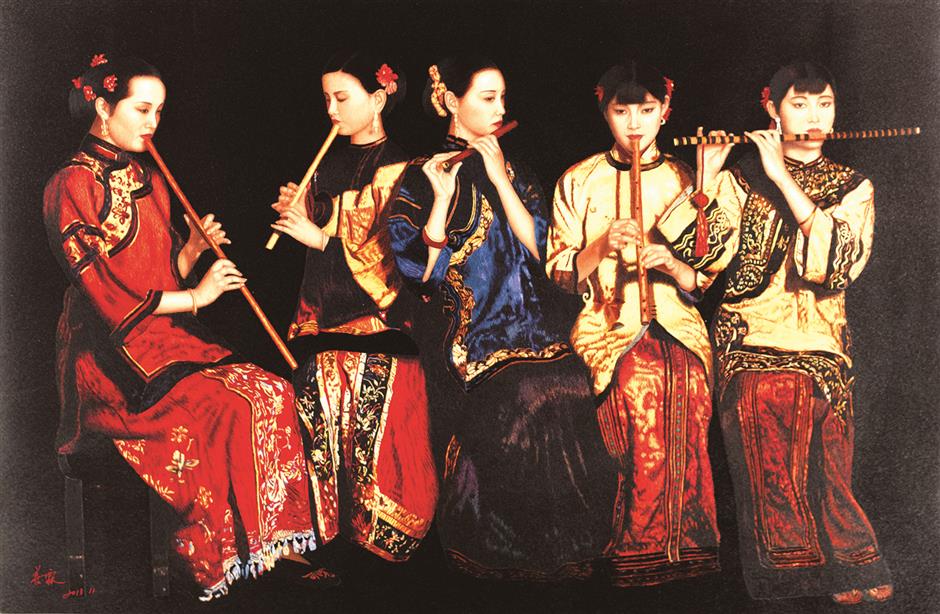 One of the embroidery works by Ye Weina

Using a needle and thread to ‘paint’

In Changning, some folk cultural “brands” have been formed, such as Shanghai thread painting founded by Changning native Ye Weina.

The state-of-the-art embroidery technique has been put on Changning’s list of intangible cultural heritage. It integrates the characteristics of different embroidery styles in China and produces embroidery that has the same qualities of a painting.

Using a combination of long and short stitches and a variety of colors, Ye reproduced masterpieces by Chinese and foreign artists.

Each stitch is like a brushstroke, and with the help of multiple hues of floss, the images can look like a photorealistic work of art.

Ye and her team even went to Dunhuang in Gansu Province to copy the murals in Mogao Grottoes with their needles. To support their work in Dunhuang, Ye and her husband sold their condo.

After seven years and two months, Ye and her team completed the thread painting of Amitayus sutra illustration with its theme originating from the mural on the south wall of a Yulin Grottoes chamber.

Since then, Ye has created more than 10 embroidery pieces in the Dunhuang series, and will continue to paint her “Dunhuang Dream” with needle and thread.