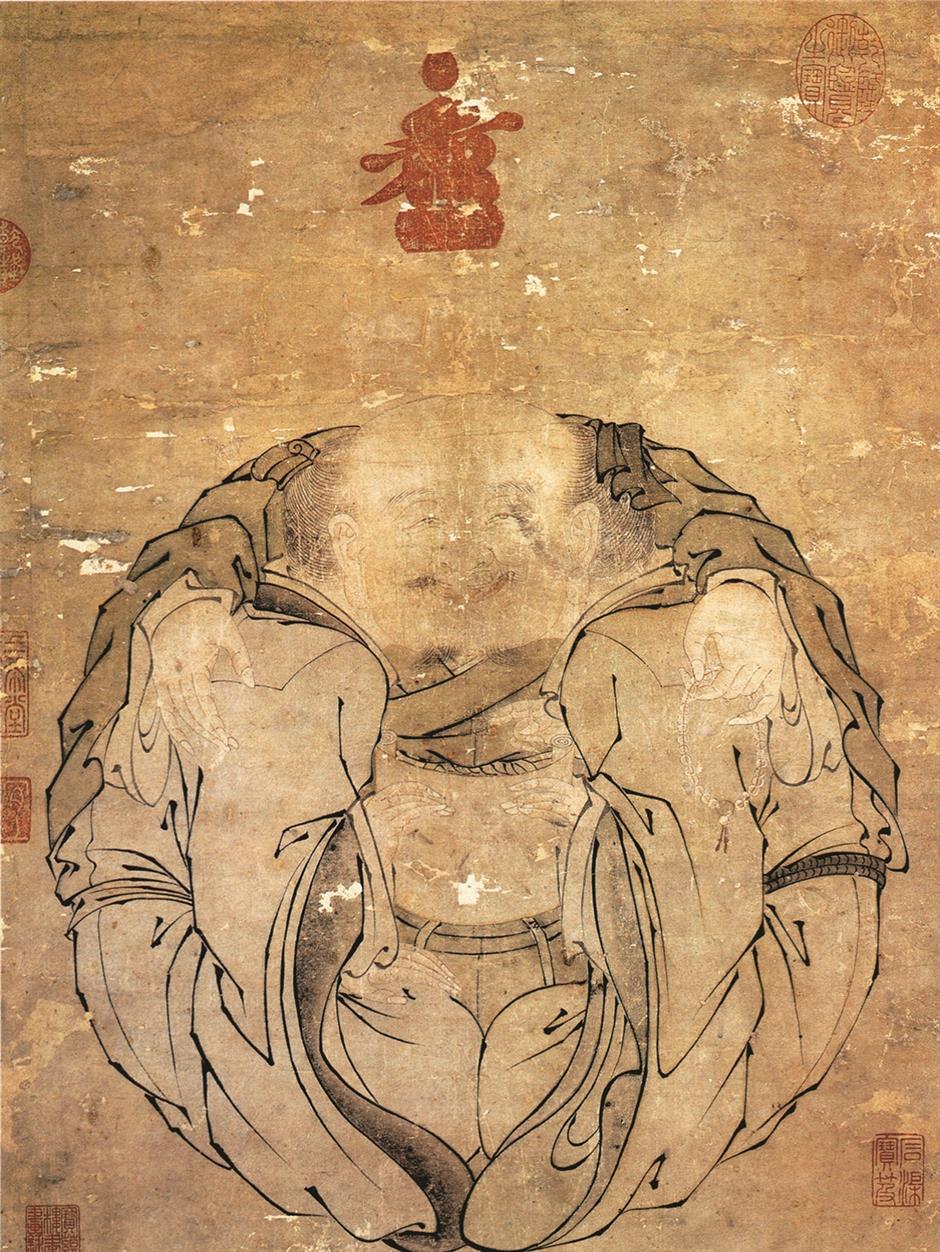 Salvador Dali, a renowned Spanish surrealist artist of the 20th century, is known for striking and bizarre images in his works.

For example, one of his famous paintings, “Apparition of the Face and Fruit Dish on a Beach,” features a double image that can be read in multiple ways.

The painting is called “Yi Tuan Heqi,” literally meaning “a ball of harmony.”

The figure that the painting portrays is a smiling, chubby Budai sitting cross- legged. According to Buddhist tradition, Budai is the incarnation of Maitreya, who is considered a forefather to the future Buddha of this world.

Nicknamed “laughing Buddha,” the Budai, wearing a simple robe, is always depicted smiling and full-figured. He allegedly lived around the 10th century in today’s Ningbo in Zhejiang Province. The bald and humorous Buddha is known for his “beer” belly.

The round figure symbolizes contentment and abundance. In Japan, Budai is considered as one of “the Seven Lucky Gods.”

If you look carefully at Zhu’s imaginative painting, you will find two other people integrated into the whole image of Budai. On the left side, it portrays a senior man wearing a Taoist hair accessory. On the right side, there is a Confucian scholar with a black waistband and handkerchief. Sitting face to face, the duo hold a handscroll together.

Cuddling them, Budai puts his hands on their shoulders, while his left hand holds a string of Buddhist prayer beads.

The three-in-one image came from an ancient Chinese legend. It goes that an eminent monk named Huiyuan (AD 334-416) lived in seclusion in Donglin Temple on the Lushan Mountain for over 30 years. He vowed never to cross Huxi, or tiger brook, near the temple.

One day, Tao Yuanming, a Confucian poet, and Lu Xiujing, a Daoist priest, visited Huiyuan. The like-minded scholars had a good time.

Deeply engrossed in conversation, Huiyuan involuntarily passed the brook. He didn’t realize it until hearing the roars of tigers. The trio laughed.

The story is widely known as “Three Laughs at Tiger Brook,” which has become an idiom implying the harmonious relationship of Confucianism, Taoism and Buddhism in ancient China.

Emperor Xianzong inherited the throne from his father, Emperor Yingzong, who was captured by the Mongols in the Tumu Crisis in 1449. At that time, Yingzong’s younger brother Daizong, who was supported by the minister Yu Qian, was enthroned in 1450.

However, Daizong suffered from a serious disease several years later and Yingzong was restored to the throne in 1457. Emperor Yingzong deposed his younger brother and killed Daizong’s supporter Yu.

One day, Emperor Xianzong showed his painting “Yi Tuan Heqi” to the officials and then surprised everyone when he ordered the rehabilitation of Yu and restored the former emperor title to his uncle Daizong.

By doing so, Emperor Xianzong expected both the revitalization of the court, which had been frustrated by the power struggle between his father and uncle, and the harmony among Confucianism, Buddhism and Taoism.

The emperor was satisfied with his work and asked people to add it as an illustration to the book “Qunxian Ji,” literally “a collection of deities,” which he compiled in 1483. The harmonious painting is in the Palace Museum in Beijing.

However, the earliest version of the woodcut image, tracing back to the reign of Emperor Yongzheng (1723-35), features only one plump figure. Some experts believe that the figure is a boy while others think it is an elderly woman. The person with double buns hairstyle smiles happily.

The joyful art, which often portrays Chinese myths, deities, landscape and everyday life, was once an indispensable part of Chinese New Year tradition.