"For my brothers Carl and Johann Beethoven:

... What a humiliation when one stood beside me and heard a flute in the distance and I heard nothing, or one heard the shepherd singing and again I heard nothing, such incidents brought me to the verge of despair, but little more and I would have put an end to my life ...”

These lines are from Ludwig van Beethoven’s will to his two younger siblings, written on October 6, 1802, when he was 32 years old. Here the famous composer references the malady that would haunt his later life and career, bad hearing.

More than 200 years later, members of the Shanghai Artists Association gathered at their studio on Qinhuangdao Road in Yangpu District and tried to create something of an equal tone to the German composer’s epic piece, in visual form.

“What Beethoven tried to convey through his symphony — to strike back against destiny and persevere — is the mood we need now to cope with the COVID-19 pandemic. What we group of artists need now is to create a giant picture portraying China’s battle against COVID-19,” said Liu Yaping, an artist and director of the watercolor and gouache painting committee of the association.

Liu and a group of about 20 artists were collectively working on a massive piece — 18 meters long and 2.2 meters tall — depicting China’s nationwide battle against the virus. The giant painting is a group portrait of front-line medical workers, soldiers, couriers, construction workers, community volunteers and other heroes in harm’s way. 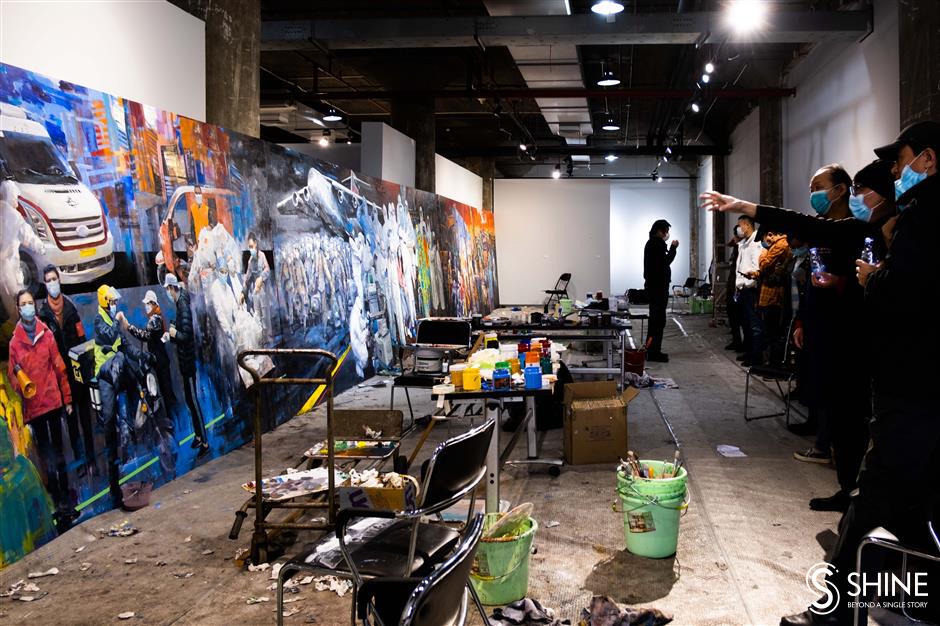 Artists discuss the massive piece they were working on.

The work, titled “The Call,” is on display with about 800 painting, photographic, sculpture, folk art and other artworks on the theme of mankind’s fight against COVID-19 at the China Art Museum in Shanghai starting from Wednesday.

“We shouldn’t shout slogans of victory now, because the entire human race is still suffering from the unprecedented disaster. On the other hand, we shouldn’t portray a gloomy picture, reminding people constantly of the high death toll. We need something positive. And China’s ordinary people fit this. The doctors, nurses, delivery men, construction workers, taxi drivers and all kinds of ordinary people who went to the front line whenever they were needed. They formed a defensive wall protecting the rest of us from the harm of the coronavirus. And we should remember this,” said Liu.

For the first time the group of Shanghai artists, the majority specializing in watercolor and gouache, gathered and worked on a giant acrylic-on-canvas image.

“As a painter, you may paint alone at your house. But for some painters, they do reflect upon society, especially now when the nation has been experiencing the attack of a disastrous virus. We group of artists gathered and our thoughts upon the epidemic converged,” said Liu Yi, one of the project’s creators.

Ping Long, one of the artists and deputy director of the association’s watercolor and gouache painting committee, joined in the creation of the third part.

“We watched a news story about a truck driver, who was on his way back to his hometown, to spend his Lunar New Year holiday there, but on hearing of the COVID-19 outbreak, changed his direction and headed to Wuhan to join the construction of the makeshift Leishenshan and Huoshenshan hospitals. People like the driver bear their nation in mind, and they show their attachment to their nation by fulfilling their ordinary roles as a citizen,” said Ping.

Before their creative endeavor, some young artists of the group also helped collect source materials for the project.

“We had several plans before we pinpointed this final one. And before we painted the final piece, we made more than 10 drafts and even a computer graphic. This meticulous approach is also what we younger generation of artists have learned from the older generation,” said Yang Yan, an artist with the association. 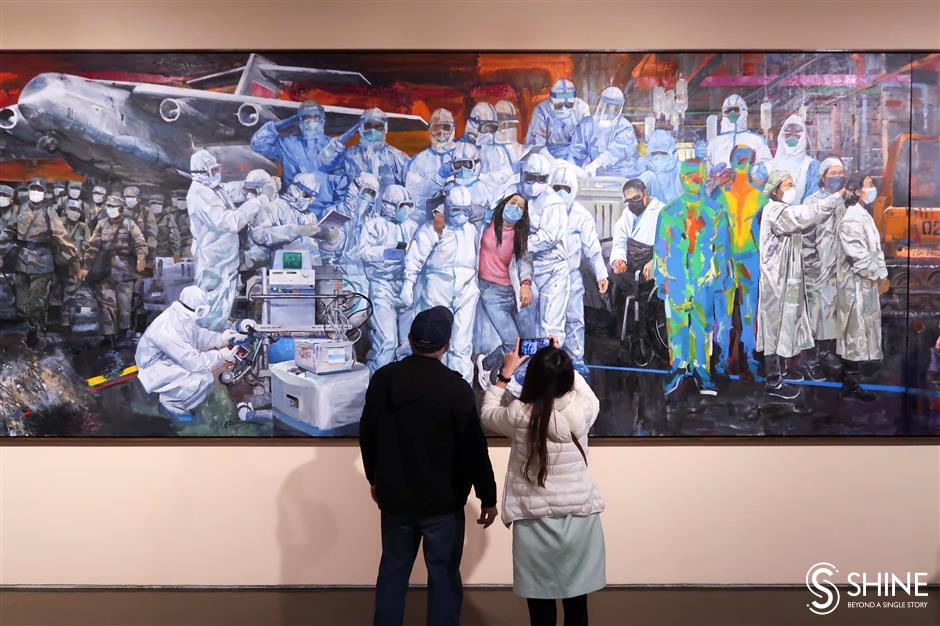 The giant painting, “The Call,” is displayed at the China Art Museum in Shanghai.