It would be fair to say the novel coronavirus pandemic has turned the art world upside down. Museums, theaters and opera houses all closed because of COVID-19. But, rather than allow the virus to win, the arts world fought back and found an innovative cure for its ills by live-streaming performances for people to enjoy at home.

On March 12, Acute Art joined hands with KAWS to launch their collaborative AR project, “Expanded Holiday,” for a series of augmented reality sculptures.

The collaboration gives both parties an opportunity to add a third dimension to displays, bringing scenes to life in a new way of discovering, experiencing and collecting art.

KAWS, whose real name is Brian Donnelly, is a New York-based pop artist and designer. The 46-year-old is no stranger to translating his signature artworks into the digital realm.

In 2017, he launched a virtual reality experience with “Visionaire” to commemorate M&M’s 75th anniversary. Now KAWS makes a foray into augmented reality in a new collaboration with AR and VR specialists.

The global exhibition launch spans six continents and can be viewed through the Acute Art app.

“Companion (Expanded),” an exhibit of 25 augmented reality sculptures by KAWS, formed a public exhibition of monumental AR sculptures in 12 cities around the world, including Hong Kong, New York and London from March 12 to 26.

The Mickey Mouse-inspired character, with a signature skull-and-crossbones head, crossed eyes and white gloves, floats over the world-famous landmarks, such as the Louvre Museum and Times Square, conjuring up a unique experience between the illusionary and real world.

It would be almost impossible to display such an exhibition if you consider the costs involved, such as insurance, transportation and space, but a world tour exhibition with the help of AR technology makes it all possible.

“Given the current situation with COVID-19 we do not encourage the gathering of people, but instead, propose that you enjoy this small version of “Companion” for free in the comfort of your own space,” KAWS said. “I am completely overwhelmed and thankful for the way my project has been embraced. And I loved seeing all the photos being uploaded so please keep them coming.”

Born in 1974 in New Jersey City, KAWS worked in animation after graduating with a BFA from the School of Visual Arts in New York. Having started as a graffiti artist in the early 1990s, KAWS began reworking advertisements in his own distinctive style. Pop art and culture permeate his cartoonish “Companion” series of figures, which is reminiscent of the works of Takashi Murakami, the world-famous Japanese artist.

The artist is known for his large-scale public installations, such as “KAWS: Holiday,” which was installed at Hong Kong harbor during Art Basel Hong Kong in 2019. He also worked together with Nike in 2017 to produce Air Jordan 4 shoes and has done multiple collaborations with Uniqlo, continuing to blur the boundaries between fine and commercial art.

Gaining both street acclaim, and more recently gallery exhibitions, KAWS’ works can be found in collections at the High Museum of Art in Atlanta, the Modern Art Museum of Fort Worth and the Rosenblum Collection in Paris.

Some of his artworks have yielded astronomic figures at auctions in the past several years. But KAWS offers more than just an AR tour exhibition.

“When I realized the quality that could be achieved and experienced in AR, I was immediately drawn to its potential. I have been creating objects and exhibiting works in public spaces throughout my career and this allows me to expand on that in a whole new arena. The possibilities of locations and scale are endless, and I’m excited to start a new dialogue in this medium,” the artist said.

During the show, the first installment of 25 AR sculptures, each in 1.8-meter height and priced at US$10,000, will be available exclusively through the Acute Art website. Users will be able to place, capture and document the ubiquitous KAWS subject at varying locations using the app.

They can also make their documentation private or public with the option to resell the sculptures too. The commission is about 30 percent of the selling price which would be split in half by both the buyers and sellers.

“This is a clever way for market circulation for his digital art,” said Wang Yuhong, a local artist. “I am impressed by how KAWS can play with art, and how this will define the ever-evolving relationship between art and technology.

“In my eyes, this project gives an opportunity to add a third dimension to existing collections, bringing objects or scenes to life. It caters for the next generation, but I doubt whether it could replace traditional art in the future.”

The second rollout is an open edition consisting of AR sculptures 45cm high in three unique colors. They will be released in various time frames and users will be able to keep the works for 1-10 days, so they can share their experience on social media. Prices start at US$6.99 for each within 24 hours.

“Perhaps the future of art involves more of the collaboration among different areas,” Wang said. “Technology aside, business awareness is also vital. To be exact, the new experience in buying art, owning it and appreciating it will be important to attract more people.” 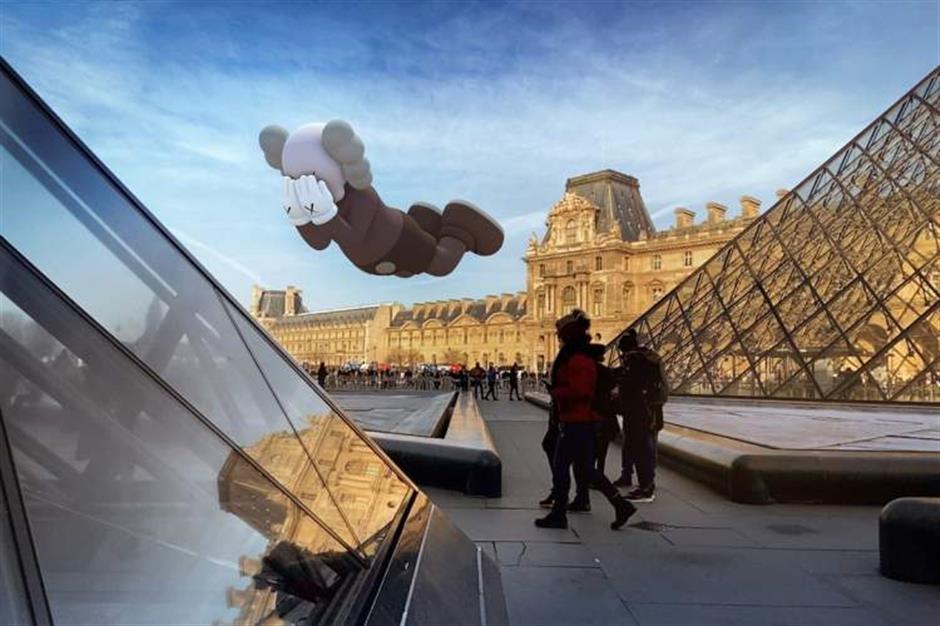