Water from the well nourishes generations of Jiading

A water town in jiangnan, the regions south of the lower reaches of the Yangtze River, Jiading sits beside rivers and close to the sea, so the saltwater in the rivers is not fit to drink. Hence, people dug wells, which were once distributed among the streets and lanes and in houses.

There were more than 20,000 wells in the district, many of them very deep.

Today, the ancient wells have slowly disappeared. However, these wells quietly nourished generations of Jiading people and are part of their culture.

Compared with the ancient wells in the north of China, the wells in Jiading are small and exquisite. They are in two parts.

The inner part is the bottom of the well and the walls. The existing walls of the ancient wells are usually lined with green tiles and are called tiled wells. There are also some built in brick. The tiles keep soil from contaminating the well water.

The outside of the wells is composed of a platform and a ring. The ring is high and protruding, installed on the platform. In addition to playing a protective role, the ring is also decorative. Craftsmen often made patterns on the well ring. Most of the existing ring decorations of ancient wells are characters and lines.

Well rings are usually made of various kinds of stones, including bluestone, granite and Wukang stone from Deqing County in neighboring Zhejiang Province. Some others are made of cement and brick. 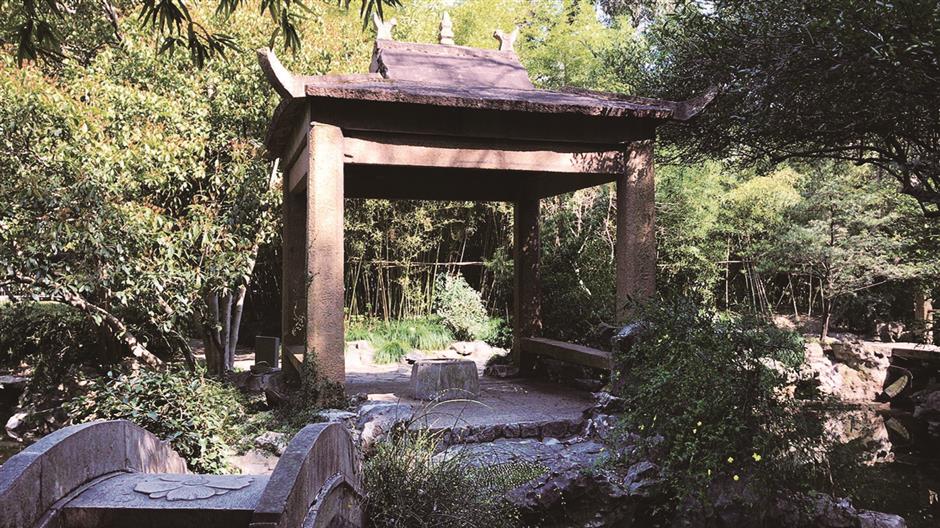 Renovated in 1948, the Six-Mile Kiosk and its well are now located in Huilongtan Park in Jiading. Made of granite, there are handrails and seats in the kiosk that once served travelers together with water from the well.

Generally, ancient wells in the Ming Dynasty (1368-1644) and early Qing Dynasty (1644-1911) used bluestones which are blue and white, simple and elegant. The rings were mostly octagonal in shape, with large wellheads.

Granite began to be popular in the middle and late Qing, while the wellheads became smaller, and their shapes mainly hexagonal, cylindrical or square. Some had a square outer edge but round inner rings and vice versa.

In the old days, people in Jiading were in awe of the wells and thought that every well was guarded by an elf. Every Chinese New Year’s Eve, people who had a well would pay a sacrifice to the well elf with fruit, tea and food to show their thanks for it “watching the well” for a year. The wells were usually then covered to give the elf a rest and opened again on the fourth day of the Lunar New Year.

During the Ming and Qing dynasties, Jiading enjoyed a rich culture and a rapidly developing economy. Wells became more and more important in the daily life of Jiading people and were recorded in local encyclopedia and maps.

Private wells were mostly dug by ordinary people. Most are small in size, but they are widely distributed. They can be seen inside or outside houses or in the front or back courtyards.

They are the most widely distributed wells in Jiading. In 1950, Jiading had more than 7,000 private wells. In addition to drinking and washing, private wells also had the function of establishing a family’s style.

An ancient well in Xingta Village in Huangdu Town has its ring engraved with the words siyuan (思源) in Chinese which means “to remember the source,” reminding future generations to think about the source while drinking water and never forget the difficulties of the past.

The well in Xingta Village in Huangdu Town has its ring engraved with the Chinese siyuan (思源) which means “to remember the source,” a reminder to future generations to think about the source while drinking water and never forget the difficulties of the past.

Another well, in Chaijialong Lane in Huangdu, has a ring engraved with the words qifu yonggu (其福永固) which means “fortune forever” — a blessing for the future generations.

Many private wells were also inked with the chronology of home establishment, making them “live fossils” for the study of the timeline of local families.

There are more than 30 ancient wells in Jiading listed as protected cultural relics. Although most of them are no longer in use, they are evidence of local families’ culture and worth discovering.

Public wells were excavated by the government or social organizations as part of local public facilities.

In 1925, a battle between two warlords near Nanxiang and Huangdu led to heavy casualties. The Chinese Philanthropic Institution, which was called jisheng (济生) in Chinese, dug a large well near Maojiawan and Minzhujie streets at the time to prevent an epidemic and provide safe water. Then, these wells are called Jisheng Well.

Now, only limited Jisheng wells are left in Jiading.

One has a diameter of more than 2 meters with a reinforced concrete structure above ground shaded by a square pavilion. Located in Nanxiang, it is the biggest among all the existing public wells in Jiading.

The one in Loutang Town, at the intersection of Qujialong Lane and Dabeijie Street, was built in the Song Dynasty (960-1279) and recorded in a local map in the Qing Dynasty. Named Big Well Pond, it was once famous for its sweet water, and a tea house was built alongside. 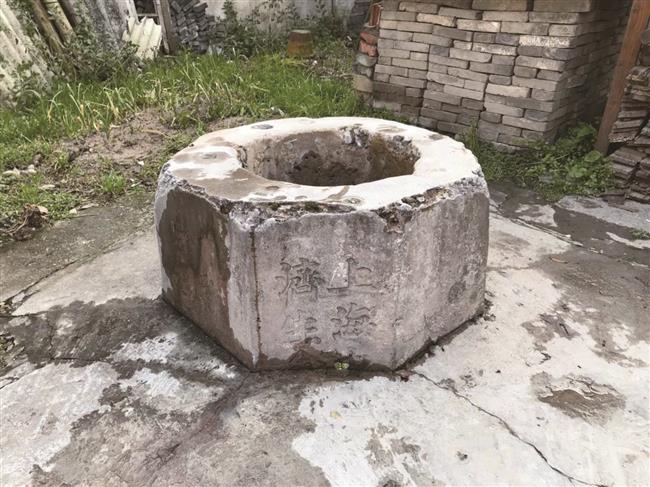 Shanghai Jisheng (上海济生), four Chinese characters, are carved on the well which is the Chinese name of the Chinese Philanthropic Institution. 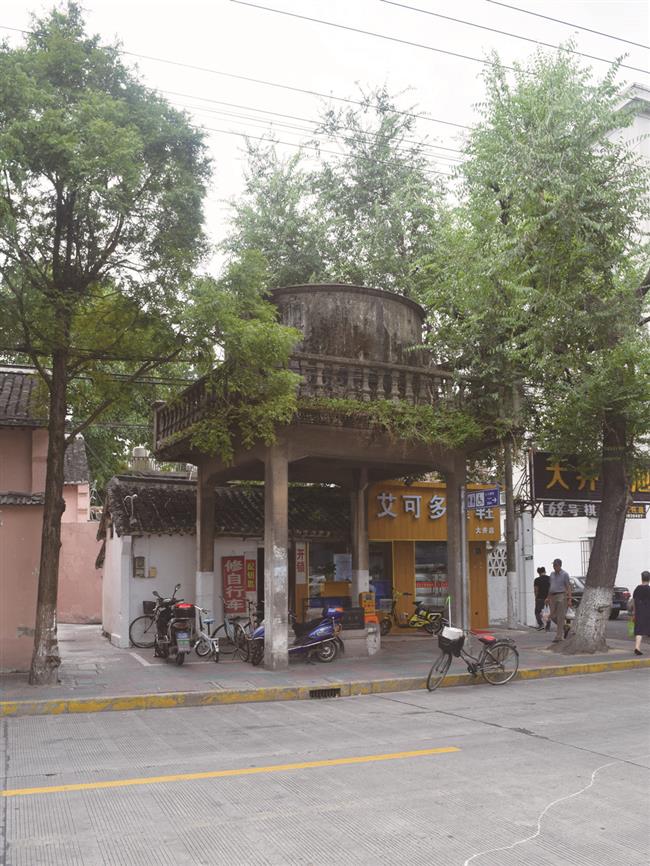 The biggest Jisheng well in Nanxiang Town has a diameter of more than 2 meters. It is shaded above ground by a square pavilion, offering a place for passersby to shelter from the wind and rain or have a rest.

Compared with private wells, they are much bigger, and most of them are shaded by kiosks which offer a place for passersby to shelter from the wind and rain or just to have a rest.

The Six-Mile Kiosk and its well were previously on the west bank of Hengli River and were moved to Huilongtan Park afterward. The kiosk and the well were initially built in the Ming Dynasty and reconstructed in 1875 after they were destroyed. Then, they were renovated again in 1948.

Made of granite, there are handrails and seats in the kiosk that once served travelers together with water from the well.

The Sweet and Cool Well (甘凉泉) in Jiangqiao Town is next to the Yangliu Bridge and shaded by a kiosk. It was built by a philanthropist in the Qing Dynasty.

There were 12 wells of such a kind in Jiading, reflecting the generosity of Jiading people.

In addition to the daily use, temple wells had religious functions.

There were many temple wells recorded in Jiading’s history, like the well in Dade Temple in the Ming Dynasty and five wells in Yunxiang Temple, both in Nanxiang Town.

The five wells in Yunxiang Temple represented a dragon’s eyes, ears and mouth in line with a widespread legend in Jiading.

At the entrance of Jiading’s Town God Temple, there are also two wells, each shaded by a wooden kiosk. The two wells were previously guarded by two ghost sculptures.

The Throwing-Away-the-Key Well in the Bodhi Temple in Anting Town is a symbol of monks promoting Buddhism. It is said a monk locked himself by chains and threw the key into the well to manifest his resolution to repair the temple by raising funds in the Ming Dynasty.

The Medicine Hall Well in Waigang Town is still in use. For hundreds of years, this well was the manifestation of the merciful and universal treatment of all living beings by the Buddha of Medicine.

The oldest well in Jiading

The oldest well in Jiading was built in the Han Dynasty (206 BC–AD 220). It was unearthed in Qianjing Village in Anting Town in 1985. The ancient well has nine muddy gray pottery rings. The inner diameter of each well ring is 70 centimeters, and the outer wall is made of linen.