The exhibition “Ukiyo-e: A Dream Journey to Edo,” jointly organized by the TIX-MEDIA and Shanghai Xinhua Distribution Group, bills itself as the largest Ukiyo-e print show ever held in China.

Literally meaning “Pictures of the Floating World,” Ukiyo-e refers to woodblock prints that flourished in Japan’s Edo period (1603-1868). These prints were produced via collaboration between artists, carvers and printers and coordinated by a publisher.

The art of Ukiyo-e incorporates woodcut-print techniques from the Chinese Ming-Qing period (14th-19th centuries). Many early works featured warriors, performers, clothing, landscapes and anything considered beautiful to the public eye in Japan.

It wasn’t until the 18th century, however, that Ukiyo-e became a popular art form thanks in part to the advent of better printing techniques.

After being displayed at the 1867 World Exposition in Paris, a major Japanese traditional art movement represented by Ukiyo-e arrived in Europe, later called “Japonism.” Due to its vivid representation of folk culture and customs during the Edo period, it is considered the “encyclopedia of Edo culture.”

On display at Bund One Art Museum through November 8, the exhibition consists of more than 140 works by renowned Japanese Ukiyo-e masters, rendering a comprehensive view of the art form, curated by Pan Li, credited with publishing China’s first comprehensive introduction to Japanese contemporary art.

“This is the first Ukiyo-e exhibition in China that tries to show these artworks from a historical perspective,” Pan said. “Although Ukiyo-e has receded into history, its artistic essence still inspires contemporary Japanese art. Every single piece is a microcosm of the times, holding a key to the treasure of Japanese customs and culture.”

As a newly developed city for the samurai class under the Tokugawa shogunate (1603–1867), Edo once attracted newcomers from different social classes, including merchants and farmers. Its lively and diverse social dynamic inspired a wide range of art, which invigorated the publishing industry and cultivated Ukiyo-e woodblock prints by local artists.

In the early Edo period, woodblock prints played a significant role in publications. Chinese illustrated books and painting-instruction reprints were some of the most popular.

The exhibition’s high point is the works of Katsushika Hokusai (1760-1849), whose career spanned more than 70 years. Hokusai experimented with various subject matters and techniques and integrated Chinese and Western styles, evident in his landscape prints. His works feature realistic depictions and surreal imagination. In his late years, he called himself “the man mad about art,” emblematic of his will to live and quest for perfection. His signature work “The Great Wave off Kanagawa” is showcased at the exhibition.

Another leading Ukiyo-e figure was Utagawa Hiroshige (1797-1858), who began studying it at the age of 15 under the influence of Utagawa Toyohiro’s (1763-1828) calming and exquisite style.

The exhibition hall is divided into four parts to represent the four seasons, while different spatial effects capture each artist’s unique take on daily life in Edo. 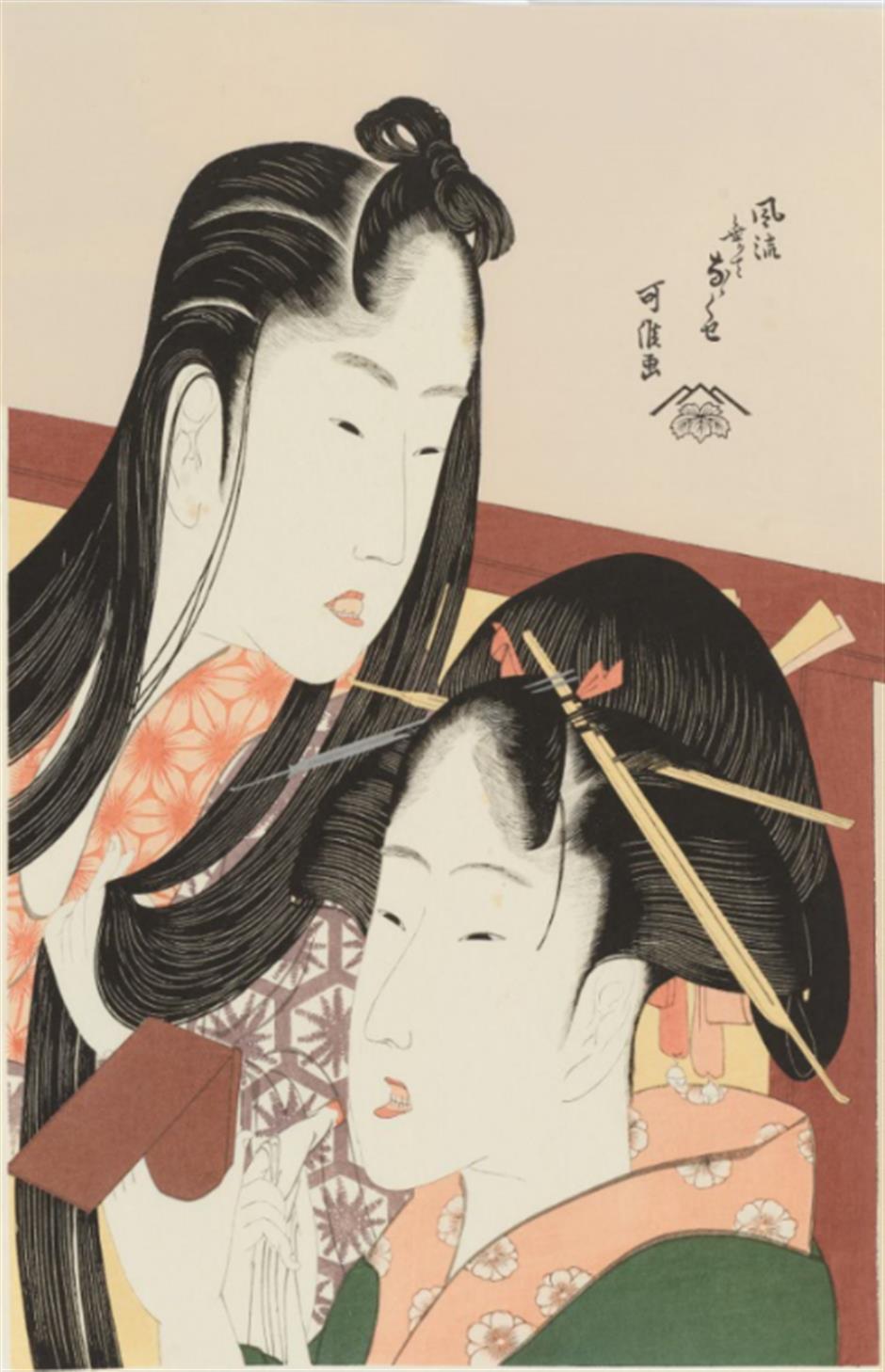 Woodblock print by Katsushika Hokusai (1760-1849). The artistic influence of Ukiyo-e has affected the Art Nouveau style in Europe, including Vincent Van Gogh and Claude Monet.

The basic procedure to produce Ukiyo-e:

• The publisher chooses a subject based on current market trends, then selects the artist, carver and printer.

• The artist creates a draft based on the selected subject en route to a master drawing with outlines for key-block carving, namely “the under-block drawing.”

• The publisher submits the under-block drawing and applies to the censor for publication.

• The carver pastes the approved under-block drawing onto a woodblock and begins carving outlines for the key-block. Twenty monochrome key-bloc impressions or “proofread prints” are then produced and sent to the artist for color designation.

• The artist marks out colors and their names in different areas on the proofread key-block impression while specifying patterns and designs.

• The carver carves each color block based on the artist’s color instruction.

• The printer prints out the work in accordance with the artist’s color marking. Image details and specific techniques are also handled by the printer.

• The publisher publishes the finished Ukiyo-e print, putting it on the market for sale.