Nanhua Temple a cultural haven to China's most precious relics 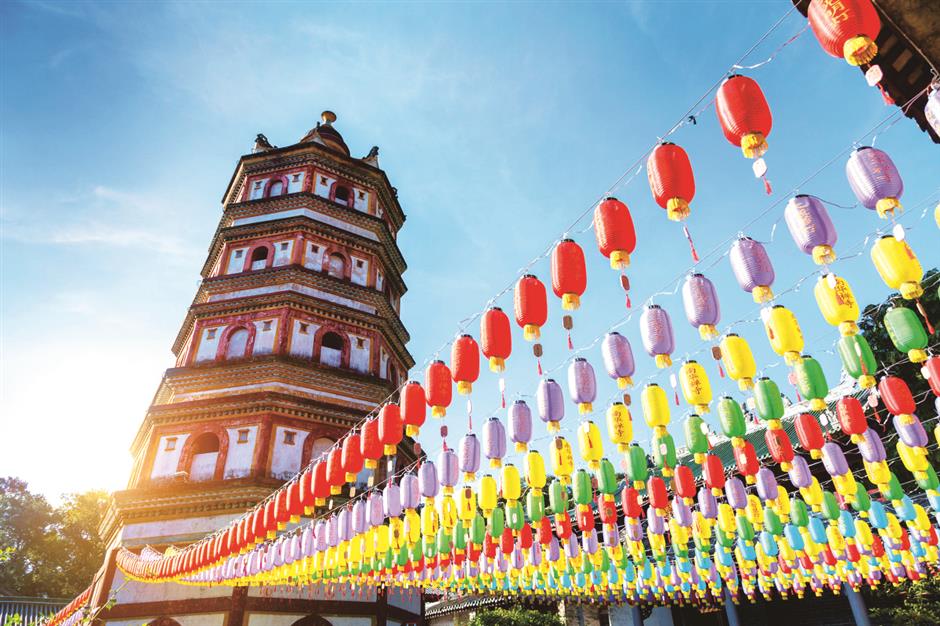 Nanhua Temple in Shaoguan, Guangdong Province, is the birthplace of southern Zen advocated by Master Huineng (AD 638-713), who is highly respected as the Sixth Patriarch of Zen Buddhism.

Nanhua Temple in Shaoguan, Guangdong Province, is the birthplace of southern Zen advocated by Mater Huineng (AD 638-713), who is highly respected as the Sixth Patriarch of Zen Buddhism.

Built in AD 502, the temple preserves many of the national treasures, including the “Da Zang Sutra,” decree and cassock.

One of the most precious relics in the temple is the mummified body of Master Huineng. He sits cross-legged with his eyes closed in the center of the Six Patriarch Hall. About 80 centimeters tall, the mummy is painted in reddish brown and sits on a sheet of linen cloth.

According to Shaoguan Museum research, the body was processed and preserved in drying and sealing treatments after he passed away. In addition to his own skeleton, the remains are supported by iron bars. The lacquered sitting statue is said to be the posture the master kept when he died.

One feasible method to make the mummy is to put the sitting body on a wooden seat carved with drain holes on a large tank, with a layer of quicklime and charcoal underneath. Put another large tank on it as the sealing cover. When the decay of the corpse drips on the quicklime it will generate heat and the moisture will be absorbed to become a mummy.

The body has suffered several man-made misfortunes over the past 1,500 years. It was damaged by ants and once opened up by Japanese intruders in the 1940s.

There have been many repairs and paint decorations to return the mummy to its original state, but the skeleton inside has been misplaced.

The “Thousand-Buddha” cassock is a rare embroidery piece handed down from the Tang Dynasty (AD 618-907).

On the apricot-yellow silk, there are 1,000 Buddha statues, sitting cross-legged with different hand gestures, which show they are meditating, preaching and welcoming.

The details in each statue, such as the mouth, nose, eyes and hair buns, are stitched vividly with golden threads. The background uses blue, vermilion and yellow silk threads, surrounded by 12 dragons.

A Guangdong Museum study reveals the cassock was bestowed by Emperor Li Xian (AD 656-710) to the Sixth Patriarch Huineng. Li was the third son of Wu Zetian (AD 624-705), China’s only empress. The temple keeps an imperial decree given by Wu to Huineng in AD 696, which is 42 centimeters wide and 140 centimeters long, decorated in fine silk.

Another fine attraction is the 500 arhat sculptures in the Grand Hall, which were made in the Song Dynasty (960-1279) and is China’s only remaining woodcarving group of its kind.

Engraved with smooth, forceful lines, every arhat is vividly brought out in a varied pose, style and facial expression.

In 1936 when the country was in a political turmoil, the temple’s abbot, Master Xuyun, hid them in the bellies of three 15-meter-high Buddha statues in the Grand hall. They were not discovered until 1963.

Inscriptions can be found on 154 statues, which reveal the carving year and sponsors, including merchants, craftsmen, monks and civilians, all pious Buddhism followers.

Leaning against the hill, the temple was constructed on an axis with halls, ponds and kiosks. The Bell Tower and the Drum Tower stand opposite to each other. On top of the Bell Tower, there is a giant bronze bell, 2.75 meters high with a diameter of 1.8 meters, which rings on every morning to mark the beginning of a devout day.

The Hall of Heavenly Kings, built in 1474, is dedicated to the Maitreya Buddha, with Wei Tuo Buddha on the back and the four heavenly kings on two sides.

The Grand Hall, constructed in 1306, stands in the center of the temple. Covered by glazed tiles, the building is inferior to none in the Buddhist constructions of Guangdong Province.