A first impression for Monet in Shanghai

When it comes to Claude Monet (1840-1926) and his impressionist paintings, long queues are sure to form outside art museums. It seems the passion locals feel for French impressionism is insatiable.

“Impression, Sunrise,” currently under way at Bund One Art Museum, features close to 50 impressionist paintings, including nine Monets on loan from Musee Marmottan Monet in Paris.

For many local art lovers, seeing Monet’s “Impression, Sunrise” and nothing else would warrant waiting in line for hours. Painted in 1872, this masterpiece attracts thousands of people every year from across the globe to its home in Paris. It has never before been displayed in China.

The canvas depicts a misty industrial port — Le Havre — with orange and yellow hues that brilliantly contrast with dark vessels and little detail immediately apparent to viewers. This striking and candid work features small boats in the foreground seemingly propelled along by the movement of water. Evidently, Monet didn’t set out to create an accurate landscape, but to record the impression formed when looking at that landscape.

In the 19th century, the advent of railways and the invention of tube paint, portable canvases and easels allowed painters to travel and paint outdoors. It enabled the artists to better capture the changing details of weather and light, particularly known as “plein-air” in French.

Monet regularly journeyed to the Normandy coast, where he painted seascapes, landscapes and scenes from daily life. Outdoor painting gave him the chance to harness the changing light throughout the day. His palette grew lighter and his touch swifter and more sketch-like.

Speed of execution was another decisive aspect of “plein-air,” when gestures became more visible. However, it was considered scandalous when it debuted at an exhibition in 1874. Most viewers were disgusted and even outraged over such “graffiti.” A critic who attended the exhibition, M. Louis Leroy, coined the term “Impressionist.”

Despite using it derisively, painters such as Renoir and Degas were happy to adopt it. Impressionist also came to symbolize the aspirations of a small group of artists now united under the newly created classification. Over time, impressionist paintings became iconic.

Manga books (Japanese graphic novels and comics) Monet collected are also featured in the exhibition. Between 1860 and the end of the 19th century, the circulation of Japanese prints in France and the rest of Europe dramatically altered the artistic world of the West, creating new energy that produced profound innovations.

For Monet and his contemporaries, the Japanese prints’ vigorous lines, bold colors and unexpected viewpoints presented a new way to simplify painting by extracting the most basic elements of a landscape and organizing them into a coherent whole.

Monet’s interest in the Far East is reflected in his characterization of some of his paintings as “Chinese pictures.” Fascinated by Asian art, he collected works by Hokusai and Masayoshi that formed the décor of his home in Giverny.

Many manga books feature scenes of everyday life in natural surroundings. The sun is a recurrent motif in Hokusai’s works, evident in several of his pieces on display in the exhibit. However, Monet acquired his manga books several years after he painted “Impression, Sunrise.” Perhaps the connection between Far East art and “Impression, Sunrise” is more mysterious.

The exhibition also showcases the abstract works of Vicky Colombet and Gerard Fromanger’s “photorealism” paintings. Born in 1939, Fromanger splits time between Paris and Siena. Like Monet, he spent his childhood in Normandy and still returns regularly. A member of France’s narrative figuration movement, his early paintings evoke the region’s landscapes. Where Monet represented the ephemeral and the fleeting on canvas, Fromanger is interested in permanence and symbolism, evident in his “Paysages decoupes” (cut-up landscapes, 1966-67) series. In this series, the Normandy landscape is reduced to its simplest elements, a stylized representation of clouds and the sun.

When Fromanger painted his “Sunrise 2019,” he further differentiated himself from Monet. The “Sunrise” he paints is seen not from Earth but from the cosmos, where planets concentrically orbit a red sun. 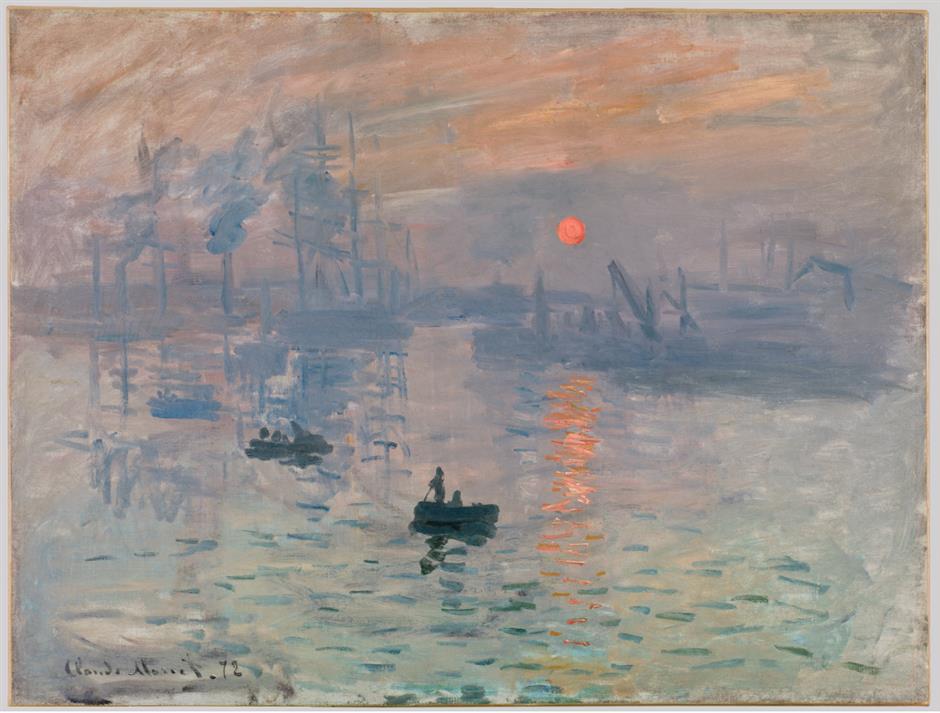 “Impression, Sunrise” by Claude Monet in 1872