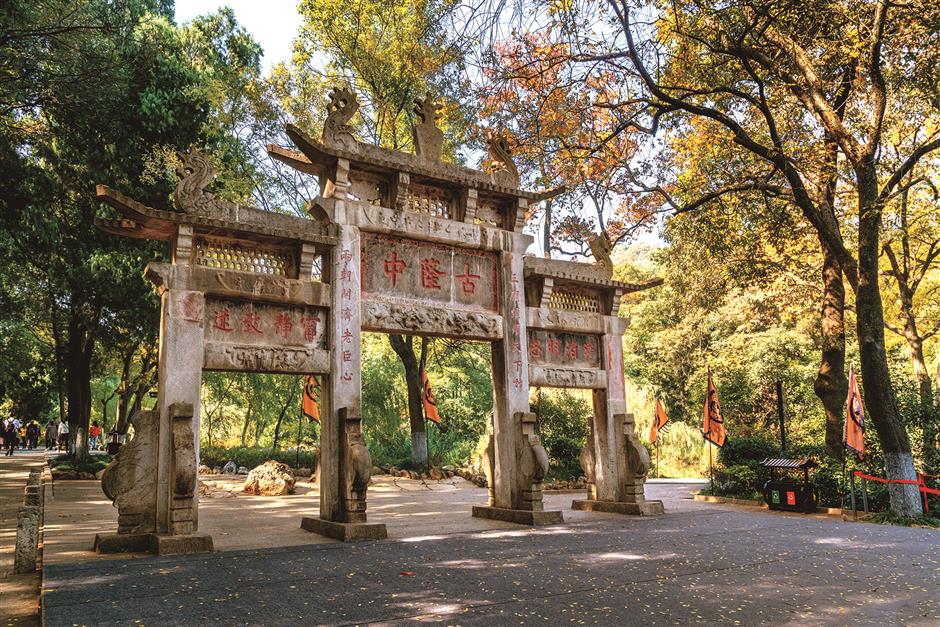 Ancient Longzhong, located in Xiangyang City of Hubei Province, provided an ideal sanctuary for Zhuge Liang (AD 181-234) to nurture and cultivate his skills.

Ancient Longzhong, located in Xiangyang City of Hubei Province, provided an ideal sanctuary for Zhuge Liang (AD 181-234) to nurture and cultivate his skills before he blossomed into an outstanding politician, ideologist and military strategist during the Three Kingdom Period (AD 220-280).

In the Chinese classic novel “Romance of the Three Kingdoms,” the man is depicted wearing a Taoism robe and holding a hand fan made of crane feathers.

Zhuge, born in today’s Shandong Province, lost his parents when he was a small boy and followed his uncle to Hubei. In the quiet, picturesque Longzhong, the young hermit studied hard, paid close attention to the ever-changing political situation, while farming to feed himself.

Zhuge called himself “Crouching Dragon,” which suggests he had great ambition and high self-esteem.

The Han Dynasty (202 BC-AD 220) was coming to an end at that time, marked by chaotic infighting between warlords in various parts of China.

Later a more stable militarily arrangement between three rival states of Wei, Shu and Wu — the Three Kingdoms — started one of the bloodiest periods in Chinese history.

It was a time when military talent was in urgent need by the competing states. Liu Bei (AD 161-223), founder of the Shu Kingdom, had long heard of the “Crouching Dragon.” To show his sincerity, Liu paid three personal visits to Longzhong, where Zhuge lived in seclusion from the age of 17 till 27. In AD 207, Liu succeeded in recruiting Zhuge, who later helped Shu become the strongest power of the three kingdoms.

Blessed with beautiful natural scenery, the Longzhong area has kept many of its attractions, which were built since Western Jin Dynasty (AD 265-317), because Zhuge was remembered and respected for his wisdom and talents in military theory, literature and invention, and loyalty to his master.

The main peak Longzhong Mountain, which is 306 meters high, stands opposite to Daqi Mountain across a valley. Seen from a distance, they look just like a crouching tiger with one head raised high. The meandering creeks flow down from the mountain that is covered in lush green bamboo forests. It’s a real Shangri-La of idyllic beauty and of peace.

Past the 6-meter-tall stone memorial archway, set up in 1893, is Sangu Hall, the venue of Liu’s three personal visits to Zhuge. The main body of the construction was built in 1719. This anecdote has been passed down the generations to almost every Chinese household to show a leader’s craving and respect for talent.

Little Hongqiao Bridge crosses the stream that runs by the Zhuge Temple. It was the only way he had to pass everyday. On Liu’s second visit, as he tried to cross the bridge on a snowy day, he mistook Huang Chengyan, Zhuge’s father-in law, for Zhuge. Liu jumped off the horse to greet in a very embarrassed way, which has become a widespread tale.

Baoxi (Holding Knees) Pavilion, rebuilt in 1888, is a three-story, hexagonal architectural structure hidden in a green forest. It’s said that Zhuge often sat tucked up on a big rock here, chanting a song of his homeland Shandong, when he felt bouts of homesickness and great ambition.

At the foot of Mountain Longzhong sits Laolong Cave, which acts as a small reservoir to the spring water running down the mountain. It is here that Zhuge collected water to irrigate his farmland when he lived there alone.

There are numerous legends about the cave. One tale says it leads to Sichuan Province, another says anyone who drinks the water will become smarter and wiser, and that’s the reason why Zhuge was so savvy. So do take a cup of green tea brewed in the spring water in the nearby teahouse to test if it’s true.

The area of Longzhong became dilapidated and fell into ruin after Zhuge left the place. The only thing that survives the great man’s time there is a hexagonal well. According to archives, the well was 16 meters deep. Today it’s only 5 meters due to the silt deposit. However the well water is still crystal clear.