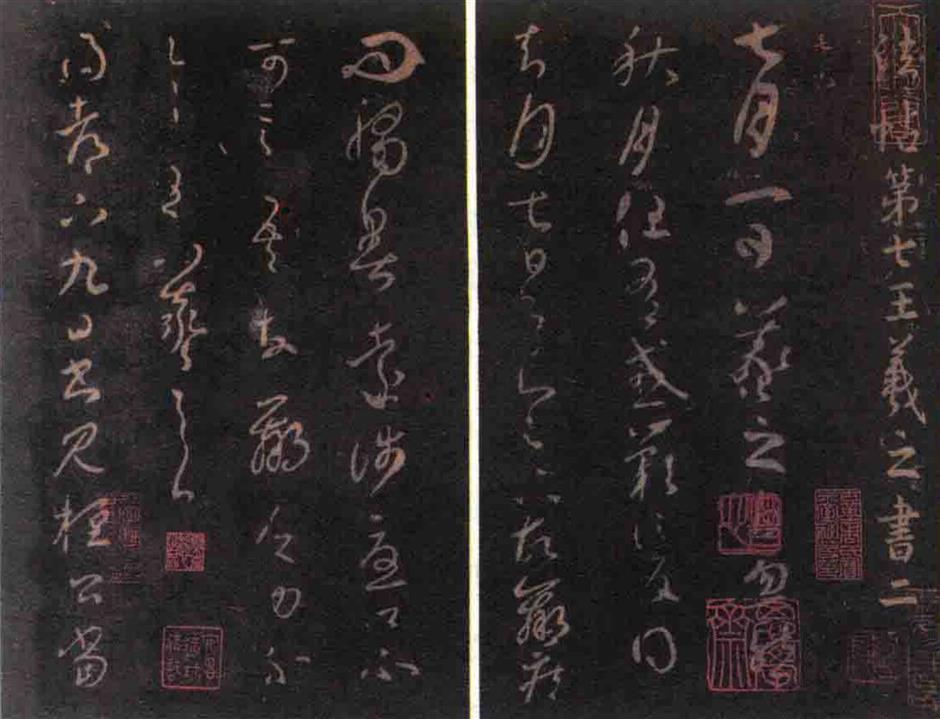 “Chunhuage Tie,” is a collection of the most significant calligraphy rubbings in Chinese history.

In a scene that resembled something out of a spy movie, a Chinese woman, carrying a black sailcloth-traveling bag, boarded a flight from New York to Shanghai on April 11, 2003. During the almost 16-hour, long haul, direct flight, she couldn’t sleep and continually checked her bag.

Who was the mysterious woman and what was in the ordinary-looking bag that made her so nervous?

It was Wang Limei, the section chief of the Department of Foreign Affairs of the National Cultural Heritage Administration. Wang was appointed by Shanghai Museum to bring back a national treasure worth US$4.5 million.

The treasure, “Chunhuage Tie,” is a collection of the most significant calligraphy rubbings in Chinese history.

“It is a big achievement in the circle of Chinese cultural heritage and a great event in the academic world,” said Chen Xiejun, then curator of Shanghai Museum.

The “Chunhuage Tie” is the earliest collection of calligraphy models found in China.

Consisting of 10 volumes, the collection features 19 emperors’ works in the first volume, 67 celebrated officials’ works in the next three volumes, 15 famous calligraphers’ works in the fifth volume. Dubbed the “Sage of Calligraphy,” Wang Xizhi and his son Wang Xianzhi’s works feature in the other five volumes.

In AD 992, the emperor commissioned scholar Wang Zhu to make a compilation of calligraphic works, which were to be held in the imperial collection along with an array of several other calligraphers.

Many of the calligraphers previously lived through the Five Dynasties (AD 907-960), a period of time between the fall of the Tang Dynasty and the founding of the Song Dynasty.

Theses calligraphers often expressed a nostalgia for the past through their works, so in order to take their mind off the political change of fortune, Emperor Taizong assigned the task to them.

The original copy was created through the method of tracing, which is known as shuanggou kuotian, or outline and fill-in. The calligraphers outlined the silhouettes of each character and filled in the outlines with ink.

The copy was then carved on blocks, which were made of jujube wood, before being printed. Emperor Taizong awarded the printed copies to his senior officials when they were completed.

Unfortunately, a fire broke out in the palace during the reign of Emperor Renzong of Song, and all the original woodblocks were burned. The disaster made the first edition of “Chunhuage Tie” even more precious. However, no one knew of the whereabouts of the treasure, and it was lost until it turned up at an auction in Hong Kong in 1995.

Qi Gong (1912-2005), a prestigious Chinese calligrapher and painter, was excited when he heard the news. He got a line on the buyer of the treasure, who was a Manhattan-based art dealer and collector named Robert Hatfield Ellsworth.

Qi invited Wang, who was going to America, to see if she could persuade Ellsworth to hold an exhibition of the “Chunhuage Tie” in Beijing.

Introduced by a local friend, Wang visited Ellsworth, who showed her the four volumes of the “Chunhuage Tie” that he had collected.

Stored in a rosewood box, the four volumes included the fourth, sixth, seventh and eighth chapters. The other six volumes were still missing.

Ellsworth revealed he bought the fourth volume at an auction in 1994. Its previous owner was Li Qiyan, a famous Hong Kong collector and connoisseur. The other three volumes auctioned in 1995, featuring Wang Xizhi’s calligraphic works, were originally owned by a man surnamed Wu.

Ellsworth originally accepted the invitation to exhibit the “Chunhuage Tie” in Beijing in September 1996, if he could have the chaozhu, or imperial court necklace, as insurance in return. But the deal eventually broke down because Ellsworth was not satisfied with the necklace sent by the Palace Museum in Beijing.

After hearing news of the exhibition Ellsworth expressed his desire to sell the “Chunhuage Tie” to Shanghai Museum.

The long journey home was eventually completed when the museum agree to buy all four volumes, after many rounds of negotiations in 2003.