Painter aiming to break the shackles of tradition 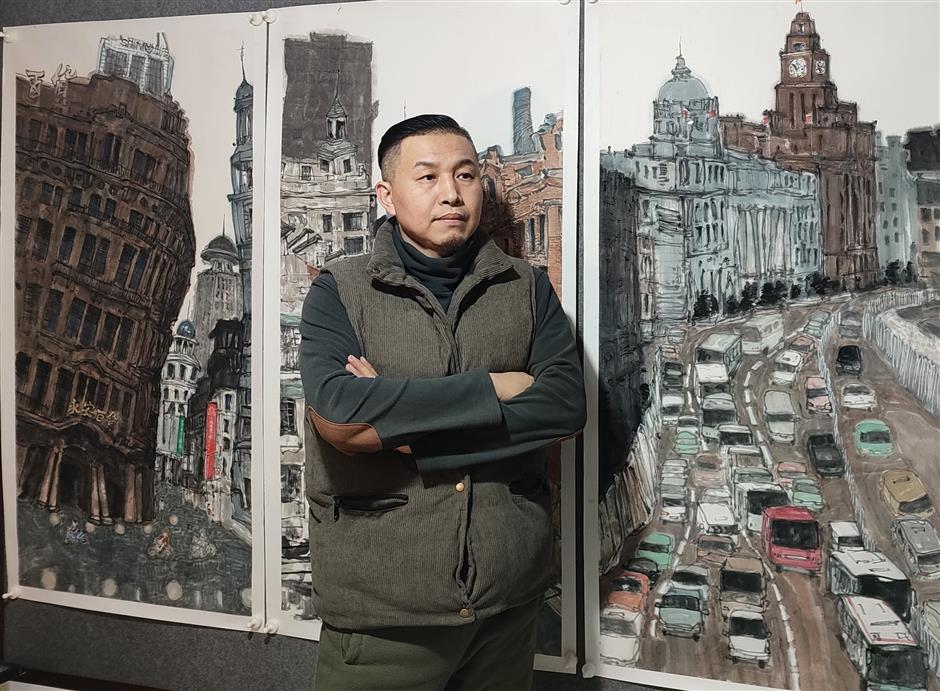 Artist Wang Hui gets his inspiration from Songjiang’s natural scenery, its folk art and the district’s extensive culture.

A designer, collector, antique shop owner, Wang Hui has now found his niche in Chinese ink painting. The 44-year-old Shanxi native, who has settled down in Songjiang for five years, gets his inspiration from the district’s natural scenery, folk arts and extensive culture.

With his free-flowing lines and mighty strokes, Wang uses his brushes for a variety of subjects, from traditional opera figures, the countryside to Shanghai snacks and bustling city life.

“I’ve been exploring in the art world in recent years, hoping to find my own art language,” he said.

Where you are dropped, as the saying goes, is who you are. The painter’s homeland of Shanxi Province, known for its gorgeous ancient murals, clay sculptures and old architecture, has deeply stamped him with a respect for tradition. However, on the other hand, he is attempting to break the shackles of tradition with his own way of artistic expression.

“I was sown on the soil of tradition, but I need other nutrients to grow and thrive,” he said. And the metropolis gives him adequate nourishment.

One of his important artwork series is “Shanghai’s old architecture.” He doesn’t stick too precisely to the details. The lines in the pictures are sprawling and flowing in a free and relaxing way. Large patches of black hues are used, making the city scene stifling and choking.

The century-old Wing On Department Store on Nanjing Road W., under Wang’s brushes, is tilting, as if it’s going to fall down. It creates a tension in the picture with a sense of oppression.

In the first two years after he came to Shanghai, Wang lived and worked near Huqiu Road, a narrow lane near the Bund. In another painting, the artist depicts the small street. The lines of the buildings, the windows and even the distant Oriental Pearl TV Tower are twisted and distorted, making them look messy and weather-beaten.

Wang often stood in front of the 91-year-old True Light Building on Yuanmingyuan Road, marveling at its densely-packed, orderly-aligned geometric lines, and wondering about the ups and downs it had witnessed over the century.

“Those architectures have passed their heyday, as new high buildings are mushrooming everyday. But to me, they are alive, breathing,” he said. 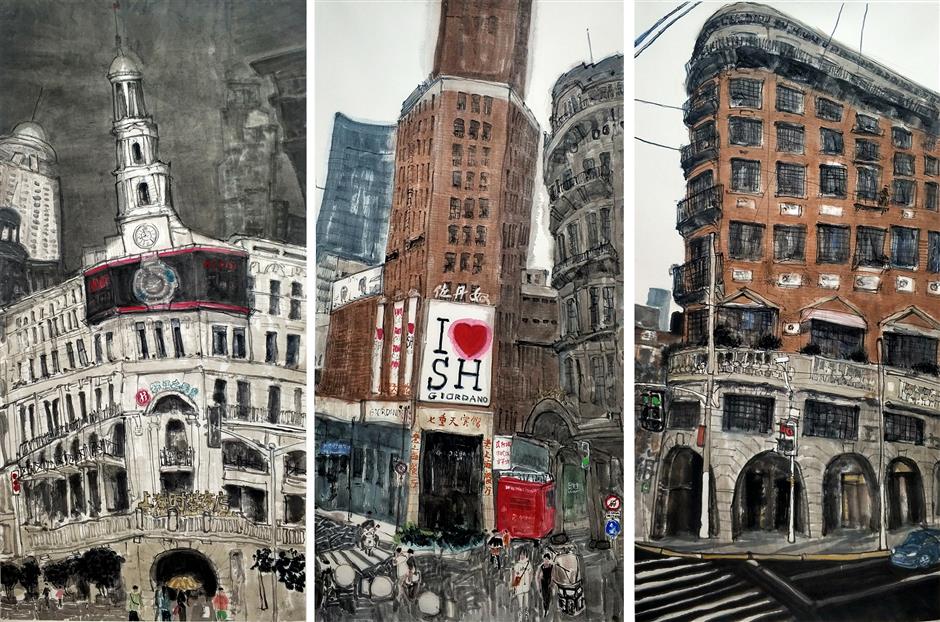 The buildings that Wang Hui paints have all passed their heyday as new high buildings are mushrooming every day. But to Wang, they are still alive and breathing.

Over the years, he has painted the Huqiu Apartments, Shanghai Postal Museum, Sichuan Road M., the Thames Town in Songjiang, Shanghai Customs House and many other time-honored buildings.

Inspired by the granite floors, the Roman pillars and colored glass windows, the artist makes the old houses live again with his free-hand points, lines and planes.

“It’s my interpretation of Shanghai’s old architecture and my way to get involved with the city as a stranger, ” Wang said.

His opera figures painting series is what makes the artist stand out. Having grown up in north China, he enjoyed watching traditional opera on major occasions of weddings, funerals and temple fairs.

“Behind every heavily colored mask on the stage, there is a tangled life story. It’s acting, but also the faithful revival of reality,” Wang said.

He has found a tight connection between Chinese ink painting and traditional operas. “They share the same techniques of expression in both abstract ways and a realistic approach. They are both rich in colors with the same oriental aesthetics,” he said.

The opera figures in Wang’s paintings are bold-colored with exaggerated facial expressions and body gestures with untamed lines yet fine-grained detail from the embroidery patterns to the carefully carved window frames.

How to combine the tradition and modernity? The painter’s “Monkey King” sticker pack he has recently designed for a social networking app is one of his attempts to get tuned in to the digital era. The lovely, lively monkey in brightly red pants wears a mischievous look across his face, showing his relaxation, optimism and dark humorous style.

“I’m willing to try as much as possible in the art field, which always brings me new ideas and inspirations,” he said. “What to paint is not important; how to paint is. Freehand brushwork is in fact to show your thoughts and reflections about this world, which cannot be enslaved by the objective form.”