Torpedo boats in the Chinese movie “Hai Ying” surprised Tong Jianliang when he was little. He spent his pocket money purchasing materials from a model shop on Nanjing Road W. to make one for himself. Since then, making model ships was like a seed that rooted and sprouted in his heart.

He took an active part in a hobby group at school and continues to develop his ability. Today, he is well-known in model-making circles and has a reputation for his deliberate, high-quality models.

More than 100 of his model ships of different sizes are showcased in the exhibition hall of his workshop in Jiading, with the group of vessels referred to as “Tong’s Armada.”

His fame has attracted the interest of several museums, including the China Maritime Museum in Shanghai’s Pudong New Area, even though he claims that making models is just an interest, rather than something to make money. Recently, Tianjin Museum invited him to make models of the Titanic and the Brave for display.

Tong started to become known for his exquisite models in the 1980s. A hotel owner wanted to spend 100,000 yuan (US$15,460) on a model of HMS Victory, best known as Lord Nelson’s flagship at the Battle of Trafalgar in 1805 and a symbol of loyalty, bravery and duty, as an auspicious ornament for his hotel. 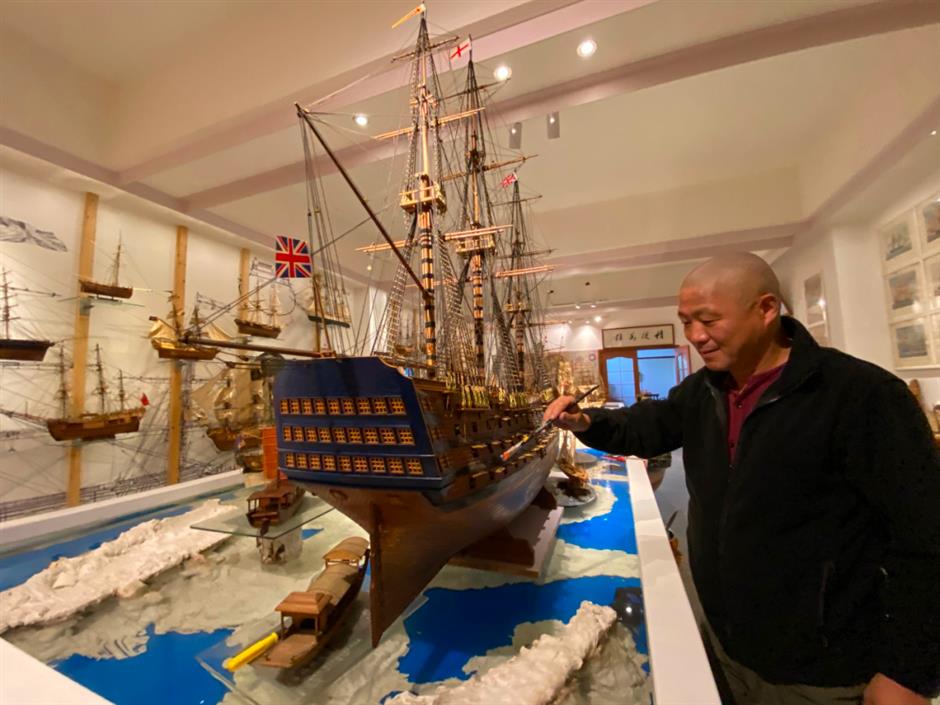 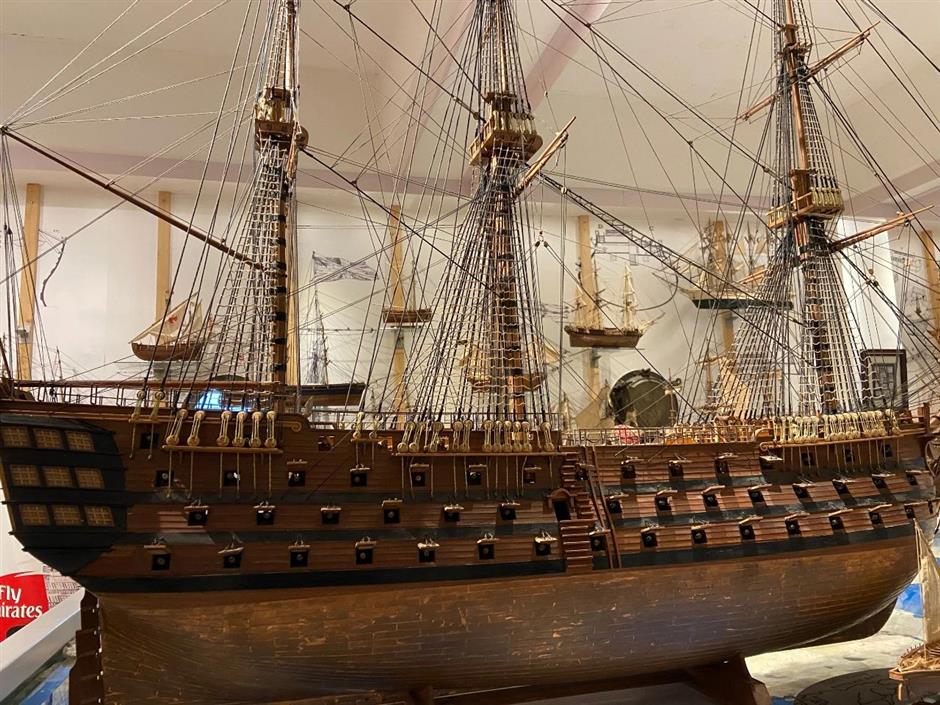 Tong Jianliang brushes dust from his model of the HMS Victory, Nelson’s flagship during the Battle of Trafalgar, in his workshop. Items on the vessel are movable, and the colors of the hull are a reflection of the different woods that Tong has carefully selected with the aim of reproducing the original style of the real ship.

After Tong accepted the order, he began his research, aiming to duplicate every detail at a scale of 1:98. It took him a year to finish.

However, when he took the completed model to the hotelier, the owner not only didn’t express any gratitude, but bossed him around, making Tong’s mood plummet. Due to the bad attitude, he told the hotel owner he wouldn’t sell it to someone who couldn’t appreciate it. Even though the hotel owner talked with Tong twice about purchasing the model, Tong refused.

For Tong, every model embodies painstaking efforts which are worth more than the price of the model itself. “If they just treated them like a toy, they could find a factory to make it on an assembly line, instead of hand-made like mine,” said Tong.

Because of that experience, the Victory model is one of the ships on display in the exhibition hall.

Tong spends a fortune every year to fund his model-making, and he has made a series of Western sailing boats that once dominated in Shanghai from the 15th century. 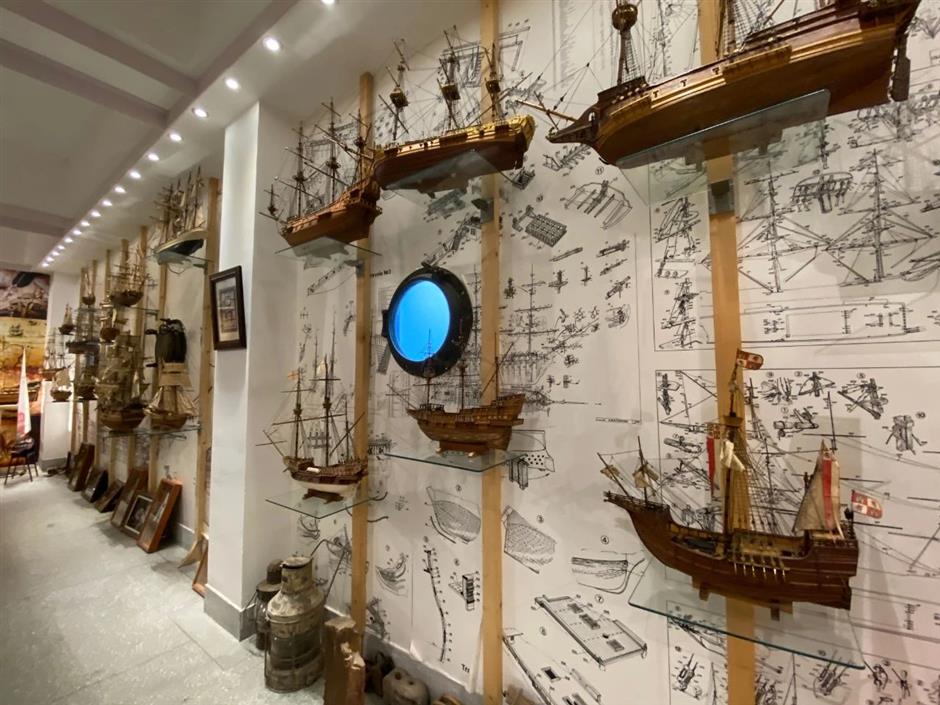 More than 100 model ships of different sizes are showcased in the exhibition hall, with the group of vessels known as Tong’s Armada.

Diligence, practice, research and much thought are his characteristics. Normally, making a ship requires hundreds of steps, from making a proof, picking the wood and final assembly. Patience is vitally important as their small size makes the task more difficult.

The choice of woods, such as rosewood, red sandalwood, phoebe and boxwood, takes careful consideration.

One of the most difficult parts is the hull of the ships as they are in different curves. “Every raw material is processed into different sizes and shapes, and when sticking pieces of slender timber together, there should be no gap between them. The gap has to be controlled less than 0.05 millimeters,” he said.

“Look here, every reel is movable. I intended to make them exactly the same as the original one with every detail bearing closer observation,” said Tong. His models show his masterly skills, and every piece is priceless.

Another highlight is his model of the Aden. Tong is in high spirits when talking about it.

“This was the first merchant ship throughout Chinese history, and it opened up the commercial routes offshore and the Yangtze River with Shanghai as the center,” said Tong. “I was fascinated by it and spent two months completing this 4-meter-long ship.” The model is a permanent exhibit in the China Maritime Museum, representing the development of Chinese navigation. 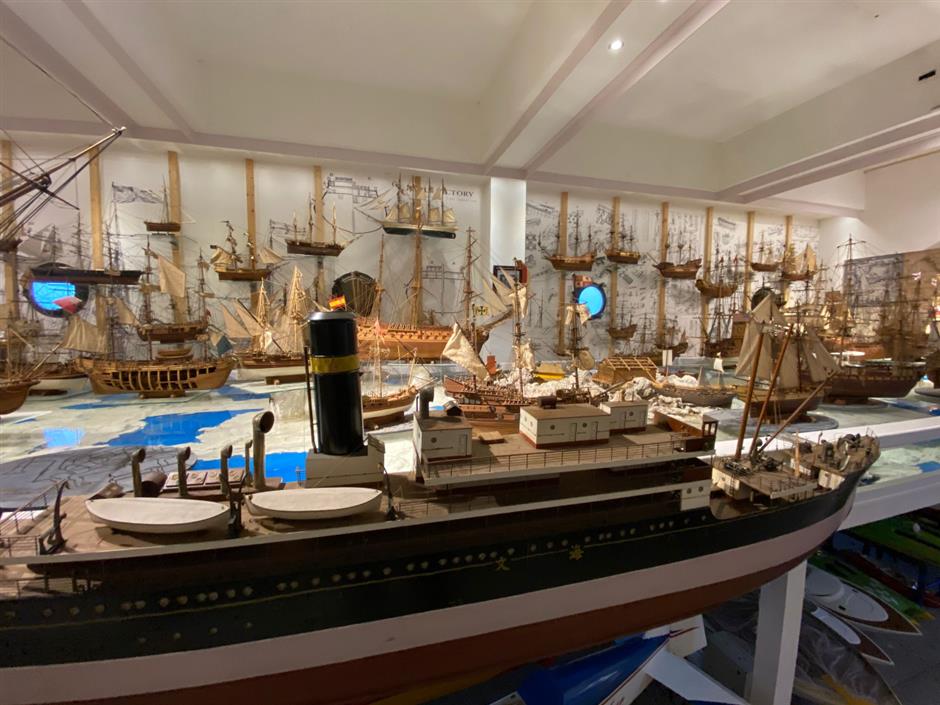 As technology develops, with much precision equipment available on the market, Tong persists in working by hand. He works for hours a day, from reading books, measuring and choosing materials, to cutting and shaping them, immersing himself in his workshop in Jiading, far from the bustling downtown area.

“There are too much temptation in the metropolis so that the young aren’t able to buckle down,” said Tong, speaking from experience.

The workshop has a number of people working there, all with professional knowledge.

“Sometimes I felt what I drew was the same as the original one, but Tong didn’t agree. He pays a lot of attention to detail and is always placing great demands on us, which is also good for our growth,” said a girl drawing on a computer in the workshop.

Tong is also proficient in installation art. His metal “Sailing Monument,” at 3.8 meters tall and with a diameter of 1.6 meters, stood at the entrance to the Shanghai Art Fair in 2015.

After learning of the existence of such an expert, the Xinlian Community invited Tong to teach art and craft for students in the community, and Tong readily agreed. He said that considering students who just started learning were not able to make a complete model, he planned to teach them how to make a simple sailing ship which was better for beginners and cultivating their interests through the course.

Students in Jiading can visit his private collection hall by appointment.