The Forever bike that ruled the streets of Shanghai

In its prime, it was once the largest bicycle maker in the country — and Shanghai’s pride.

Old-timers will recall with nostalgia how the Forever-brand bicycles once ruled the streets of Shanghai since the 1960s. Such was its value at one point that it was an essential part of dowry in most marriages.

“The bicycle was the ultimate must-have in the 1980s. A street scene with people riding bicycles to and from work was one of the representative images of China at that time,” says Zhu Zhongyan, who joined the Shanghai Bicycle Factory, the maker of Forever, at the age of 20 in 1968 as an apprentice and rose to become a senior designer.

At that time, it was the largest bicycle maker in Shanghai. It was only rivaled by two other brands in the country — Tianjin’s Feige (Pigeon) and Shenyang-based Dongfanghong (East Red). 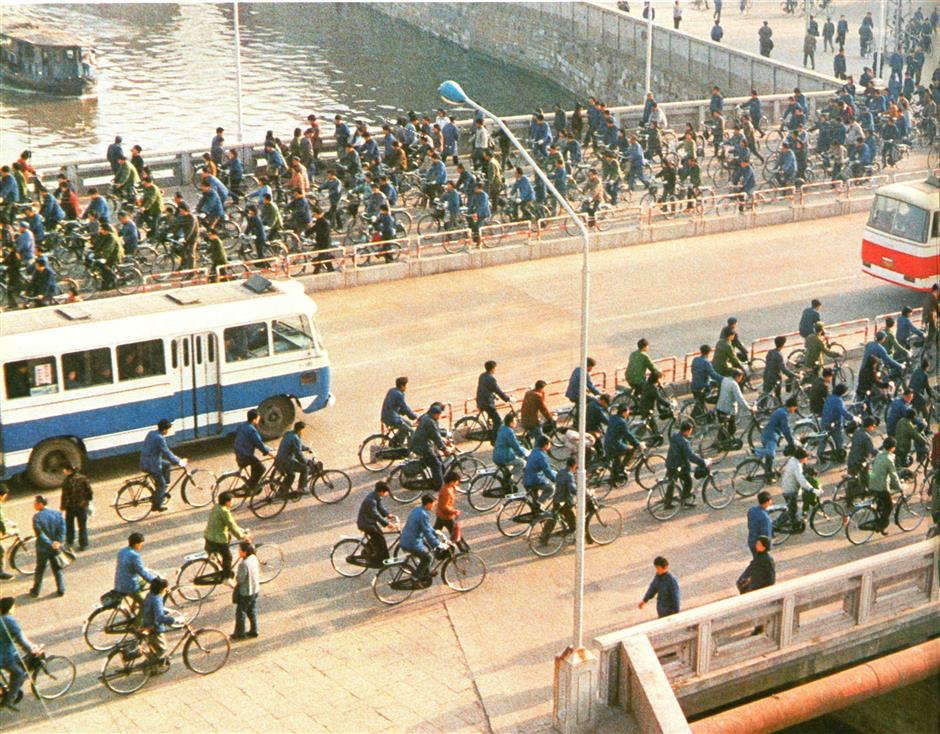 Forever’s journey can be traced to the 1940s when a Japanese manufacturer set up the Changhe Workshop on Tangshan Road in today’s Yangpu District. It manufactured 26-inch Tiemao (Iron Anchor) bikes, with most of the work done manually. It sold around 3,000 bikes a year.

After WWII, the government of the Republic of China took over the Japanese workshop. It was to change hands again in 1949 when the People’s Republic of China was founded. The brand name of the bikes was changed to Banshou (Spanner), as well as Xiongqiu (Yongjiu), a new logo which saw a polar bear standing on top of the Globe — in honor of the help from the Soviet experts.

The arrival of Yongjiu, or Forever, as it came to be known across the world, was officially announced on January 1, 1951. The plant making the product was known as Shanghai Vehicle Factory. Forever was launched to celebrate the New Year with the factory’s brand and production undergoing significant transformation.

In 1952, the government merged the factory with the Huang brothers’ Heli Toolmaking Workshop to become the state-owned Shanghai Red Star Vehicle Factory — only to change it to Shanghai Bicycle Factory the next year. The brothers brought many skilled workers to the new establishment, including technicians, chemists and managers, most of them graduates from the highly-regarded Henry Lester Institute of Technical Education in Shanghai. It set the wheels of change in motion.

Much of its automation was designed and fabricated in the factory with homegrown technology. The technician, who designed the conveyor system, was promoted to an engineer. The factory came up with other labor-saving devices to raise efficiency and improve quality control. By 1952, the annual output of Forever bicycles had reached 28,767, accounting for more than one-third of the national bicycle output. 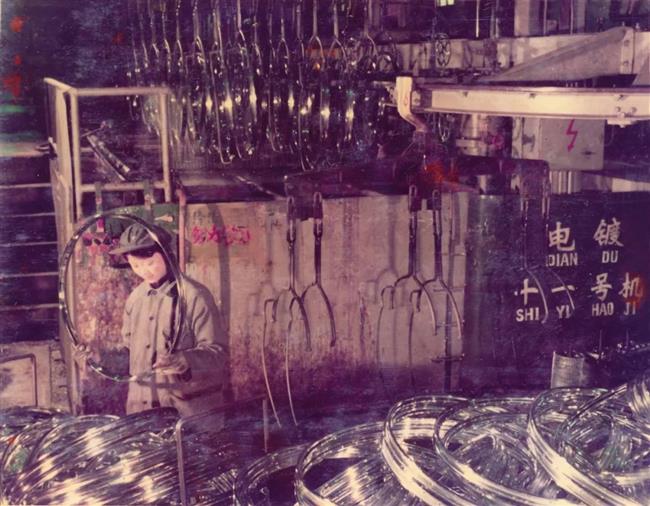 The operation line in the electroplanting room at the Shanghai Bicycle Factory in the 1970s.

By the end of 1956, the Shanghai Bicycle Factory had rolled out the 28-inch PA-11 Model, which was to become the standard bicycle of the country. Forever PA-11 adopted the metric system, setting forth the specifications of many bicycle components, including the frame, fork, wheels, pedals, brakes and reflectors.

In 1958, the Forever 81 model hit the streets. Along with Shanghai 135 Camera 58-1, the Shanghai Watch and the Hero Pen, Forever 81 was among the 10 innovative Shanghai light industrial products. Lightweight, efficient and aggressive, the road racing bike was selected by the Shanghai cycling team to compete at the first National Games in Beijing the next year. The riders brought home the championship.

By 1962, the Shanghai Bicycle Factory came up with another gem. The Forever Mail Bike, with its hallmark sturdy steel frame, was introduced for postal deliveries across the country.

“It was unique for its time, equivalent to the smartphones today,” said Zhu, who rose to become a welder on the assembly line and was involved in the setting-up, programing, and operation of one or more automated welding machines at the factory.

“There was a lull during the difficult 1966-68 period, but the innovation and production in the factory never stopped,” Zhu said. 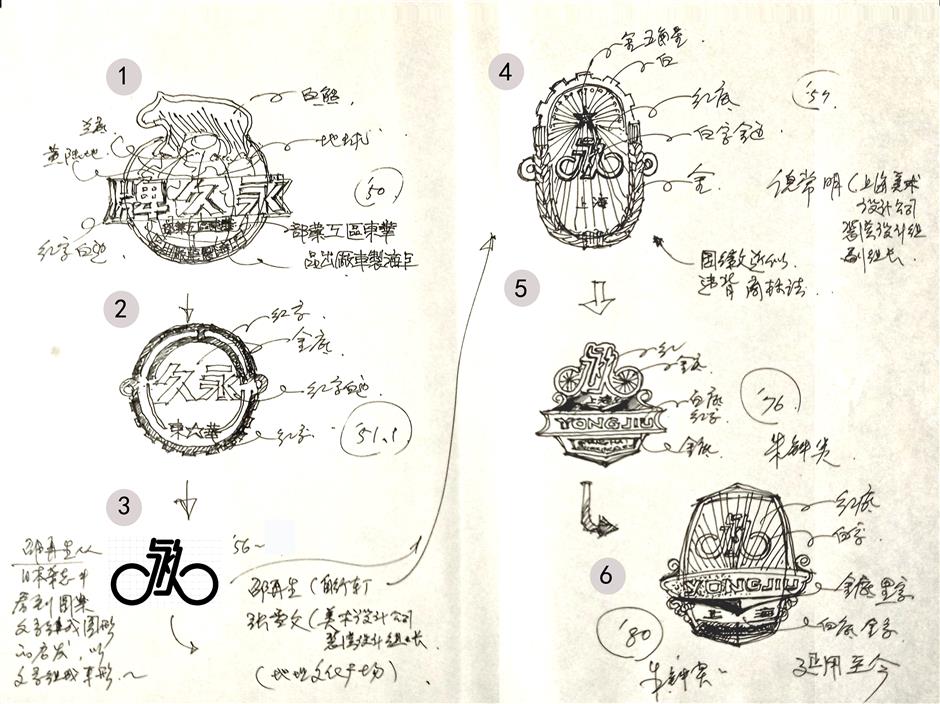 A manuscript of Zhu Zhongyan describes the evolution and design process of the Forever logo used by the Shanghai Bicycle Factory over the past 70 years.

“In a planned economy, a Forever bicycle was priced at 120 yuan, nearly four times that of an average worker’s salary which was roughly 36 yuan a month. Even if you had saved enough money, you needed a coupon stamped by the director of the factory to make sure that you could get one at the store. In the black market a coupon was priced as high as 100 yuan,” Zhu recalled.

“That is why it was such a dear item for the newly-weds, especially the Forever PA-13, which was made of manganese steel. Known for its high impact strength and resistance to abrasion, it was priced at 188 yuan.”

Local rivals sprang up soon. The No.2 Bicycle Factory specialized in producing Xingfu (Happiness) moped, comparatively faster than bicycles. The No.3 Bicycle Factory produced Fenghuang (Phoenix) bicycle, a favorite among women and urban youth for its chic looks. The No.4 Bicycle Factory mainly produced small-wheel bicycles under the brand name Feida (Godspeed). But Forever still remained the hot property.

By the late 1970s, new models were developed to meet both domestic and overseas demand. The SC67 model was aimed at the European and American markets. A self-taught designer, Zhu was commissioned to give the 10-speed 27-inch men’s sports bicycle a face-lift, including a new logo.

“Most of the designers were handpicked from the assembly. After intense testing by professionals in the United States, the SC67 bike quickly became a rage among the American youth who prized its quality build and excellent value,” Zhu said. 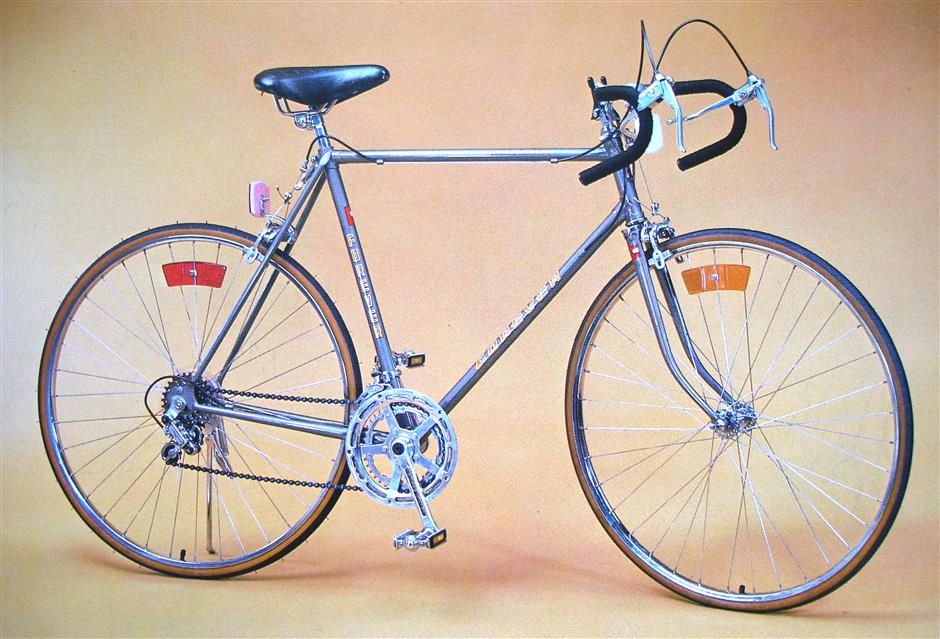 With fame came demand. Forever spelled out its ambitions by building plants across five provinces in 1986. Boasting a daily production capacity of 10,000 Forever bicycles of nearly 166 varieties, its employees worked three shifts a day. It was also the beginning of planned marketing strategies with promises of new models every year.

More than 5 million bicycles had been exported to more than 90 countries including Russia, Canada, Germany, Japan and Singapore by 1990. The insatiable demand for bicycles led the government to develop the sector further.

“Almost everyone wanted a bike. It was a swift, affordable, stylish mode of transportation,” Zhu recalled. “As a cutting-edge state-owned enterprise in a booming industry, Forever also provided its employees with subsidized meals at the company canteen, welfare housing, medical care, education and training.”

Forever enrolled Zhu to the College of Light Industry in Shanghai for a one-year course in product development in 1974. He went on to study industrial design at the Academy of Arts and Design in Beijing, an experience that he said deepened his understanding of what makes a product unique “from the perspectives of technology, packaging, customer experience and environment.”

At the relatively young age of 40, he quit Forever and headed to the Saitama University’s graduate school of science and engineering in Japan. He graduated with flying colors for his design of a folding bicycle in 1993. 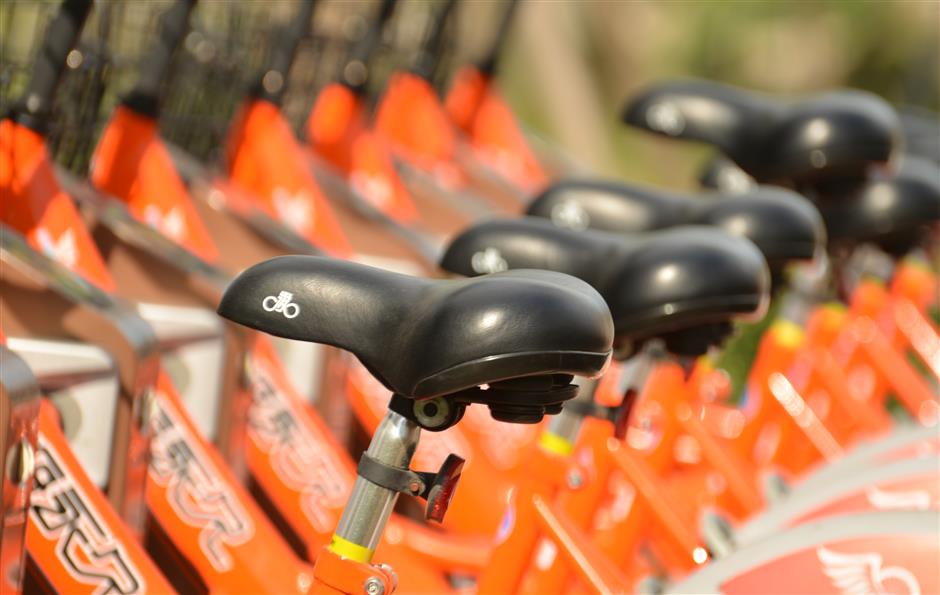 The Forever bikes parked at a Metro station as part of the bike-sharing program in Shanghai in 2017.

“I used to be one of the designers of the Shanghai Bicycle Factory. The experience I had there followed me everywhere,” Zhu said.

In the early 1990s, the Shanghai Bicycle Factory made the headlines by exporting the whole production line to Cuba to help the country with its public transport.

In 1993, the Shanghai Bicycle Factory was listed on the Shanghai Stock Exchange as the Shanghai Forever Ltd Co. As a time-honored brand, the company managed to keep Forever as a brand name under the revised Trademark Law.

After hitting its peak, the demand for bicycles began to tumble in the mid-90s. Automobiles were the “new bicycle.” Forever’s factory in Yangpu became part of the urban renewal and development process as Shanghai’s industrial structure underwent a drastic transformation.

In 2001, the Zhonglu Group bought the Forever brand to develop green and environment-friendly products.

With the government spending billions to redesign the cities with a renewed focus on cycling and walking, it would be worth remembering that bicycle manufacturing used to be one of China’s biggest and most innovative industries.

Zhu Zhongyan, senior designer and PhD mentor with the College of Design and Innovation at Tongji University