Family treasure: Memories are made of this

Every household may have several old but valuable items, some inherited from older generations, having witnessed many changes throughout China’s history. Three Jiading residents share their collections that reveal how life was lived, a family’s happiest moments and rapid development of technology.

A basketful of family love

An incense basket has been at the center of a family for four generations. The incense basket from the Republic of China period (1911-1949), a food ticket from the planned economy era, a white enamel wash basin with scarlet characters, a commemorative plaque for the completion of the Hujia Expressway and the millennium edition of Jiefang Daily published on January 1, 2001... all are in a small exhibition held recently by Feng Pinchao, a Xida Community resident. He brought out treasures he’d collected for many years to share the stories behind them with his neighbors.

“This incense basket was made in the early last century and has witnessed the changing lives of our family for four generations,” Feng said.

The purple rattan basket was originally part of his mother-in-law’s dowry. It was used to serve cakes when entertaining guests. Later, it came to the Feng family in his wife’s dowry.

“Life in the 1970s was very poor. My mother-in-law thought this incense basket was quite new and almost undamaged, so she gave it to us,” said Feng.

They lived a very frugal life.

Feng’s wages were mainly spent on oil, salt, sugar, rice and other necessities. “In the era of the planned economy, you couldn’t buy without food stamps.”

The tickets and stamps with the characteristics of that period “are the unique memory of our generation,” Feng recalled. Most of the food bought with food stamps at that time was put in the incense basket for the family to live on for a month.

After China implemented reform and opening up policy, Feng went to work at a joint venture factory, and his monthly income grew to 800 yuan.

As his living conditions improved, Feng maintained his hobby of collecting old objects, and the incense basket was passed on to his son.

When his son got married, his daughter-in-law’s dowry included a refrigerator, a television, a washing machine and other household appliances, but the incense basket had its place in his son’s home. “My son usually puts some snacks in it,” Feng said with a smile.

A granddaughter is about to become the next owner of the incense basket.

“When the granddaughter gets married, I don’t know what the dowry will be in the future, but I’m sure that the things in the incense basket will change again and again. The times are changing, much faster than expected,” Feng sighed. 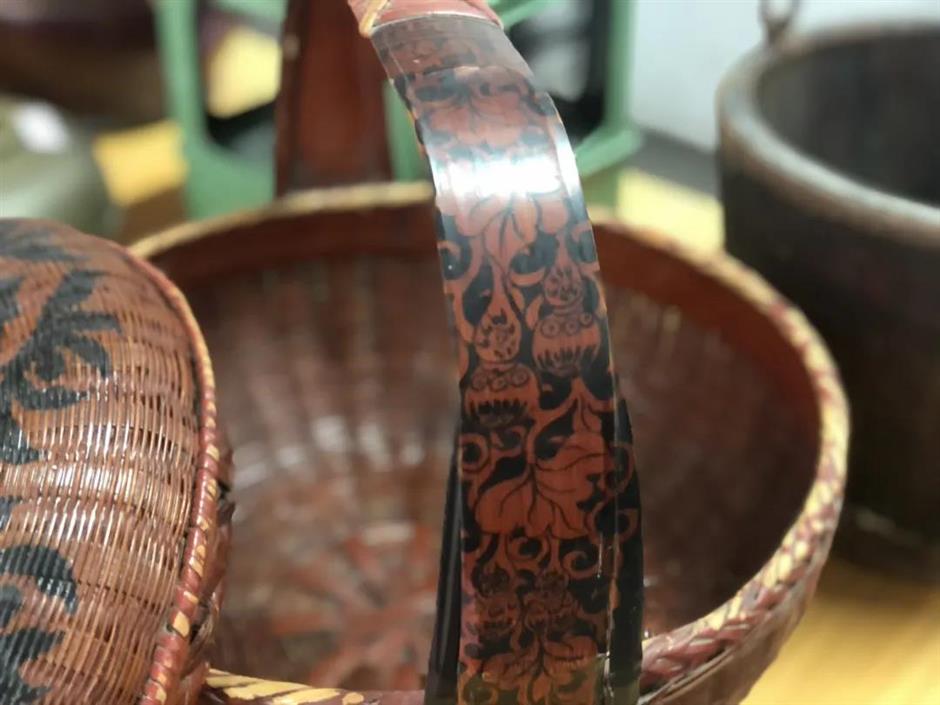 This ratten incense basket bearing witness to the happy lives of four generations of a family was made in the early part of last century. It belongs to the family of Feng Pinchao, a resident in Jiading Town.

Phone calls from the past

Jiading native Guan Hukui is 70 years old. He has two drawers packed with used mobile phones. Guan keeps all the mobile phones he and his family used, from cordless phones to Nokia, Samsung, Huawei and Apple models.

“It’s an Ericsson mobile phone. I remember that it cost about 4,000 yuan. At that time, mobile phones were the smaller the better but the functions were very limited."

Today’s mobile phones are bigger and have many functions. Younger generation all use mobile phones to buy things online. Sometimes I also join them to order online.”

Guan mainly uses WeChat or opens the Xuexi Qiangguo app on his mobile. “There is tons of information online!”

Looking at the old mobile phones, Guan feels the times are changing particularly fast, but he is also glad “people of my generation have witnessed and participated in the development of the motherland, and our next generation has also caught up with the good times, so I really hope that today’s children can study hard and work hard, and that greater changes and more miracles are waiting for them to create in the future.” 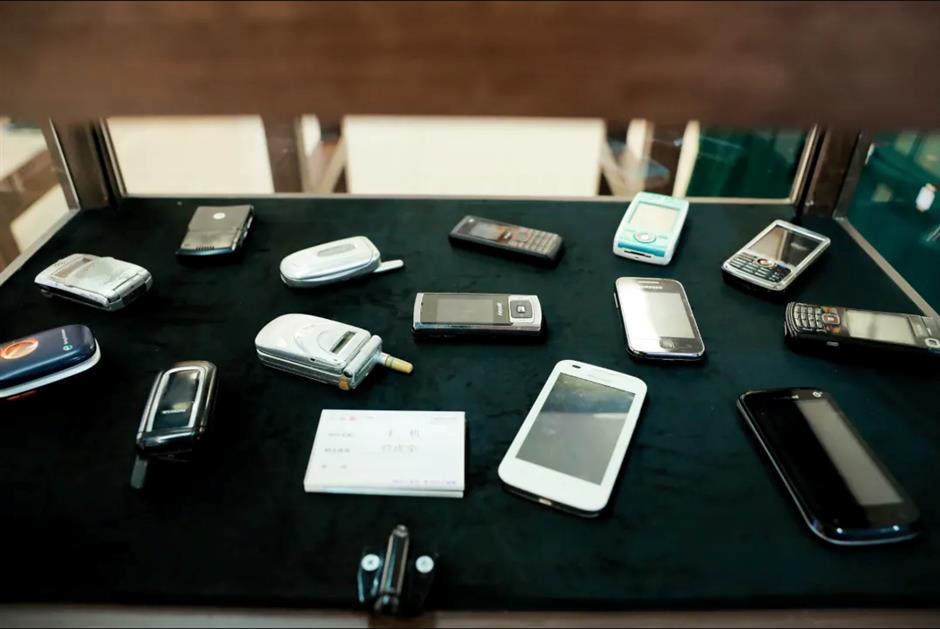 Cellphones collected by Jiading resident Guan Hukui who is now 70 years old. He keeps all the mobile phones used in his family for memory’s sake.

Cherished paper in a pocket

As times changed, so did marriage certificates.

Wang Azhen, who lives in the Zhenxin Community, found a green padded jacket her late mother once wore. A neatly folded piece of rice paper was in one of the pockets. When it was unfolded, she found that it was a “marriage letter” from when her father married her mother. 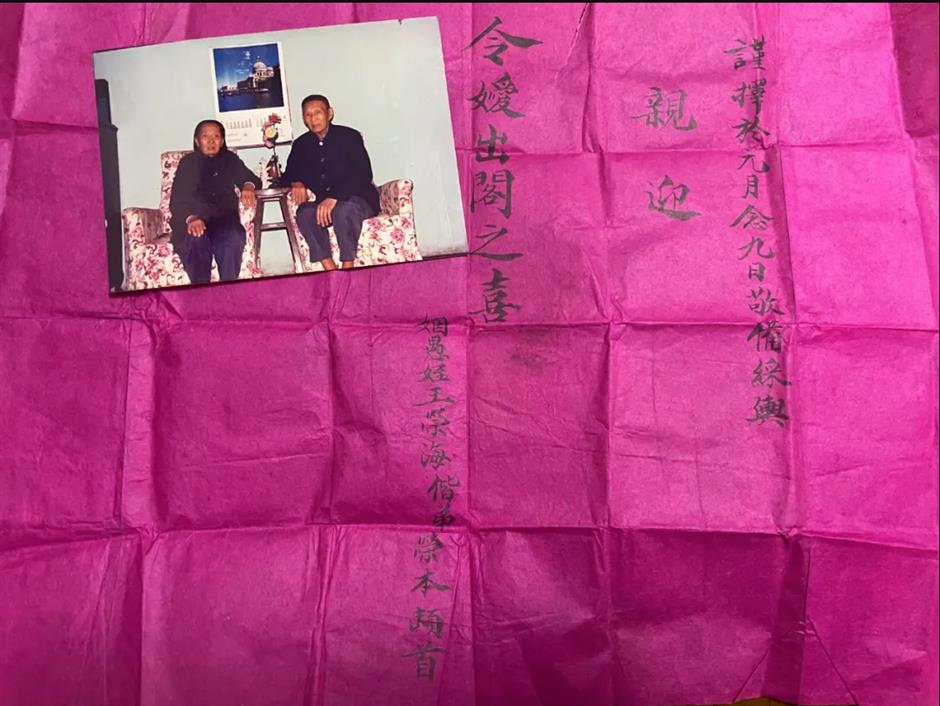 The marriage certificate of the parents of Wang is simple and quite different from today’s certificates. Her mom always kept it in the pocket of her cotton jacket.

“My parents got married in 1933,” Wang said. With the only color photo of her parents in her hand, Wang continued: “My mother told me that on the wedding day, my father came to my mother’s home with this marriage letter and handed it to my mother.

“It was this green cotton padded jacket that my mother was wearing at that time, and it was also her wedding dress.”

Last year, Wang and her husband celebrated their 50th anniversary. Their marriage certificate looks like a certificate of merit, according to Wang. Previously, parents of both sides treated relatives and friends to a meal at home in celebration. “There was no wedding ceremony held in a luxury hotel, exquisite wedding photos or banquet,” Wang said.

For their 40th anniversary, Wang and her husband made up her wedding photos, fulfilling her long cherished wish. 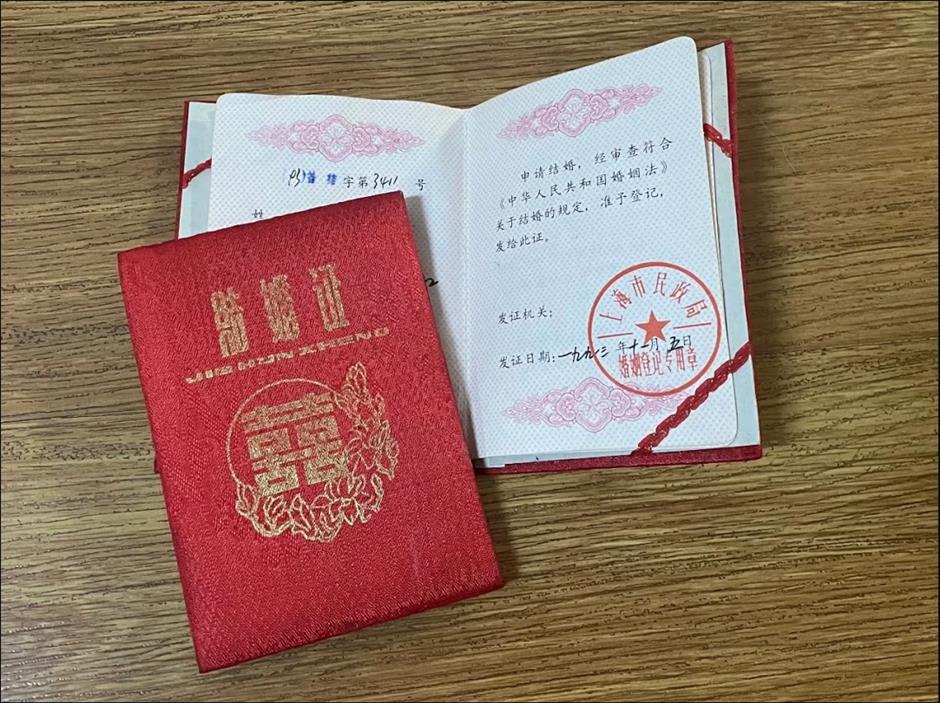 The marriage certificate of Wang Azhen’s daughter has a red cover and exquisite paper.