Curtain up for first-class performances this spring

As the curtain is rising on a new season, theater goers don’t need to worry about the impact of COVID-19 on performances. The theater has prepared more than 80 shows — including concerts, drama, dance and children’s plays — a feast of art for both adults and children this spring.

To celebrate the 100th anniversary of the founding of the Communist Party of China, the theater’s 2021 Red Classical Culture Series will include 14 performances marking the heroic deeds of many of the people involved. An exhibition depicting the hard road traveled during the development of the Party is open to the public free through August 31. 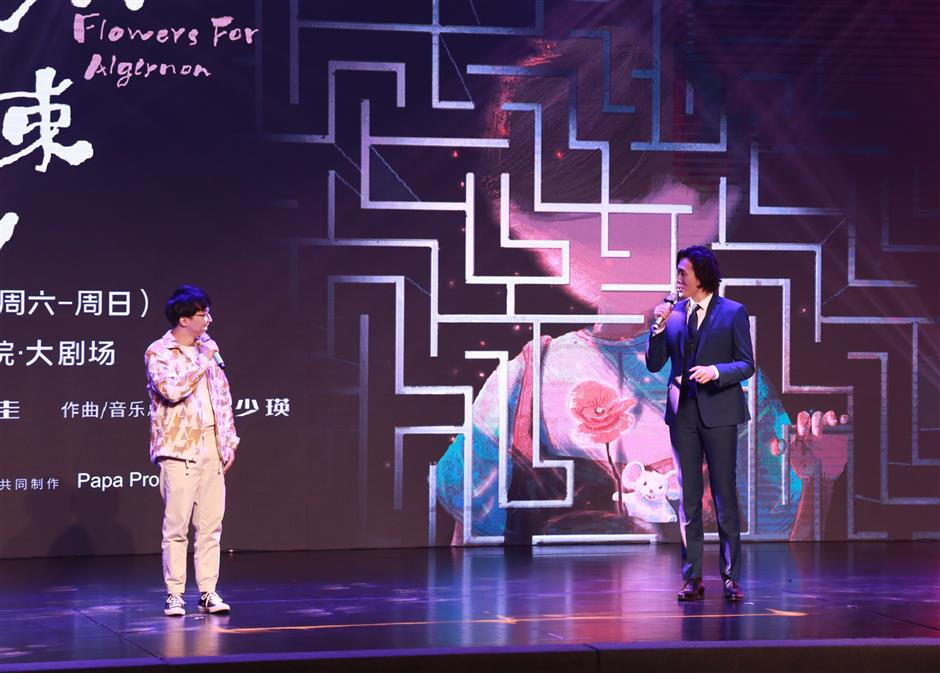 Renowned performers Liu Yang (left) and Zhang Junbo sing an excerpt from the musical “Flowers for Algernon,” which will be staged in May, at the launch ceremony for the new music season at Shanghai Poly Grand Theater.

Following the success, the theater decided that the outdoor performances would be held every month from May to October this year. Audiences can also enjoy the charm of art in the outdoor waterscape theater in May and June.

Art education is another focus of the theater.

The third children’s choir festival will be held as usual in summer, but with many more groups participating. It is estimated that around 80 choral groups will be taking part.

Charlie Gordon has an intellectual disability, and all he wants in life is to be a smart man like normal people. Accidentally, he is chosen to take part in an experiment to raise IQs and undergoes a brain surgery with Algernon, an experiment rat. After surgery, Gordon becomes a genius, even making speeches and talking about the future at university. But his life gradually falls from the heaven to a dark place with anxiety, bias and jealousy. He discovers that the real world is awful and inhumane. His thoughts bring him both wisdom and terrible feelings.

A signature work of Shanghai Dance Theater, “The Eternal Wave” has been extremely popular with audiences since its debut in 2019. The show is based on the real story of Chinese revolutionary martyr Li Bai. Together with his wife Lan Fen, the couple risked their lives for 12 years as they secretly passed information over the radio. They witnessed the death of numerous comrades, and Li sent out the last telegraph before bravely sacrificing his life. The stage design is filled with typical Shanghai elements such as shikumen buildings, narrow alleyways, newspaper stands and tailors’ shops. A qipao dance is a highlight of the work.

‘The Comedy About A Bank Robbery’

The ill-run Bominghan City Bank receives a large task — Prince Ai Dehua plans to keep a valuable diamond there. The news soon reaches the ears of criminals Du Qi and Ba Ji who escape from prison and gather Kai Li and Shan Mu to steal it. They don’t expect that the chaos will embrace them during the crime. The comedy is produced by Mahua FunAge which aims to pass on happiness and positive energy to audiences.

On Halloween night, fans of Agatha Christie gather in a villa for their annual Halloween games. However, a murder happens unexpectedly, which links to the members of the Mousetrap Research Club who have been missing for 15 years. People feel anxious as nobody knows if this is just a game or a real murder, so they have to cooperate with each other to investigate the case. The drama adapted from Christie’s “The Mousetrap” made its debut in 2009 and has been captivating audiences ever since.

﻿
Special Reports
﻿
61763
,
Curtain up for first-class performances this spring
Telling the stories of people who made sacrifices for the Party
Xi breathes new life into ancient pagodas
Three greats join for riverside installation
The knead to keep an ancient folk art alive
Me, myself and I: showcasing the power of women
Finding your inner peace in art
Ancient temple comes to life with annual qiushu bloom
It should be man with nature, not man versus nature
A vision to make public art truly public
EXPLORE SHINE