Fossils give us clues about the history of life on Earth. The archeological discovery at the Zhoukoudian site, about 50 kilometers southwest of downtown Beijing, proves that Homo erectus and Homo sapiens once inhabited the land.

The site is a cave system, discovered by Swedish geologist Johan Gunnar Andersson and Austrian paleontologist Otto Zadansky in 1921. Zadansky found two dental remains there, which inspired later archeological investigation. After years of excavation, a skullcap was unearthed by Chinese archeologist Pei Wenzhong (1904-82) on December 2, 1929.

According to scientific research, the skullcap belonged to a Homo erectus, which became known as Peking Man.

Another four skullcaps were found at the site in the following years, along with teeth, bones, stone artefacts, traces of fire and mammal fossils. Evidence suggests that the fossils can be traced to between 710,000 and 230,000 years ago. 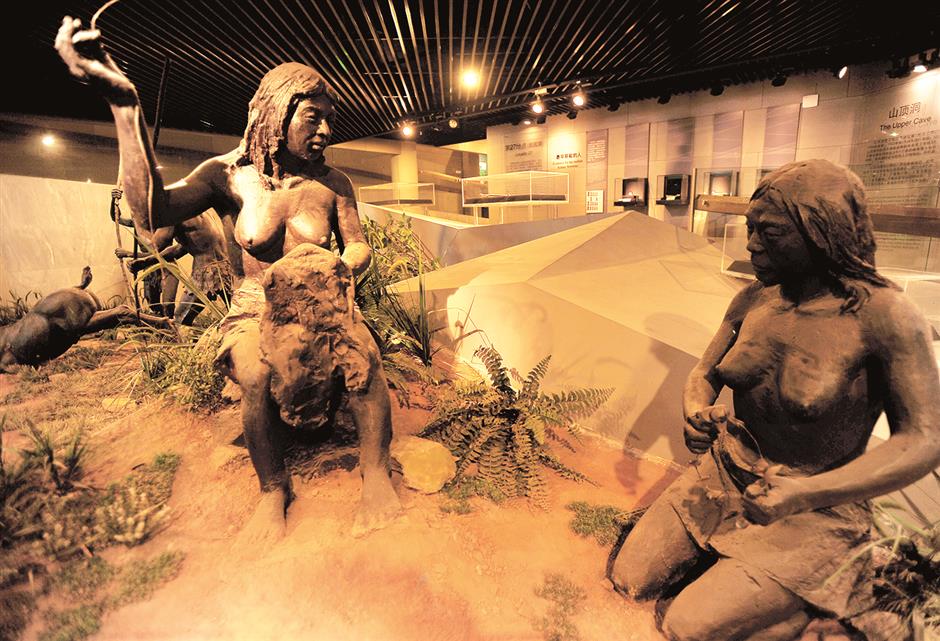 A restored living scene of a common day of primitive men is displayed in the Zhoukoudian Peking Man Site Museum.

The skull of Peking Man is flat in profile and thicker than that of modern humans. He had a small forehead, heavy brow ridges, an occipital torus, a wide nose and a protruding and chinless jaw. His teeth are bigger than ours.

The experts assume that the cranial capacity of Peking Man averages 1,043 cubic centimeters, which is in between of that of ape and modern man. Based on the length of bones, the height of Peking Man is believed to be 1.56-1.57 meters.

The Peking Man site is listed as one of seven UNESCO World Heritage Sites in Beijing along with the Great Wall, the Summer Palace, the Forbidden City, the Temple of Heaven, the Ming Tombs and the Grand Canal.

Hundreds of thousands of years after the existence of Peking Man, the site “welcomed” their new guests — a group of Homo sapiens, dubbed “Upper Cave Man.” Enjoying a wider view, the sapiens lived in the cave-rooms that were higher than those of Peking Man.

The Upper Cave site was found in 1930. Although its area is not big, the fossils unearthed there are abundant, including three complete skullcaps, skull fragments, mandibles, teeth and trunk bones of eight individuals. Among the eight people, there are two adult men, three adult women, one teenager and two children.

Their bones show the characteristics of modern man. The experts assume that their cranial capacity is about 1,300 to 1,500 cubic cm and the average height of men reaches 1.74m while that of women is 1.59m.

Franz Weidenreich, German anatomist and physical anthropologist, studied the three skullcaps. He assumed that one of them belonged to a man in his 60s. According to the index measured through his skullcap, the elderly man seemed to be linked to Cro-Magnon, which is regarded as the prototype of modern Homo sapiens in Europe. However, he was thought to be Mongoloid in morphology.

Archeologists also found many remains of animals such as wild rabbits, chitals and fishes at Upper Cave site, which indicates that Upper Cave Man had mastered the techniques of hunting and fishing.

Apart from fossils, a large number of ornaments were excavated there. They are made of seashells, stones and animal teeth, including those of fox, deer, badger and other small carnivores. All of the 125 animal teeth were drilled with holes from both sides.

The stone ornaments were not only polished but also dyed, which attests to the Homo sapiens’ technical skills and artistic sensibility.

Unfortunately, the original fossils of both Peking Man and Upper Cave Man were lost during World War II. Concerning the turbulent environment, the Kuomintang government decided to ship the fossils to the United States for safekeeping. However, the ship loaded with the treasures were attacked by the Japanese armies on the day after Pearl Harbor attack in 1941. Since then, the bones have never been recovered.

The replicas of Peking Man skull and Upper Cave Man skull can be seen at the National Museum of China in Beijing.

Special Reports
ADVERTISEMENT
61864
,
Peking Man changed thinking on evolution
Buzzword: 降维打击 a dimensional collapse strike
Citizens' Day celebrated at newly renovated museum pavilion
A colorful life rendered in black and white
Curtain up for first-class performances this spring
Telling the stories of people who made sacrifices for the Party
Xi breathes new life into ancient pagodas
Three greats join for riverside installation
The knead to keep an ancient folk art alive
Me, myself and I: showcasing the power of women
EXPLORE SHINE