It's the time to indulge yourself in Yangzhou

It’s the best season to visit Yangzhou, in the middle of Jiangsu Province. Take a boat ride on the Slender West Lake, walk through the exquisite ancient gardens, gulp down succulent meat balls, or indulge in a traditional foot massage.

With the high-speed railway opening last December, it’s now a swift two-hour trip from Shanghai to this small quiet city.

The Yangzhou Museum might be the best place for visitors to have a quick peek into the city’s past pains and glories over more than 6,000 years. 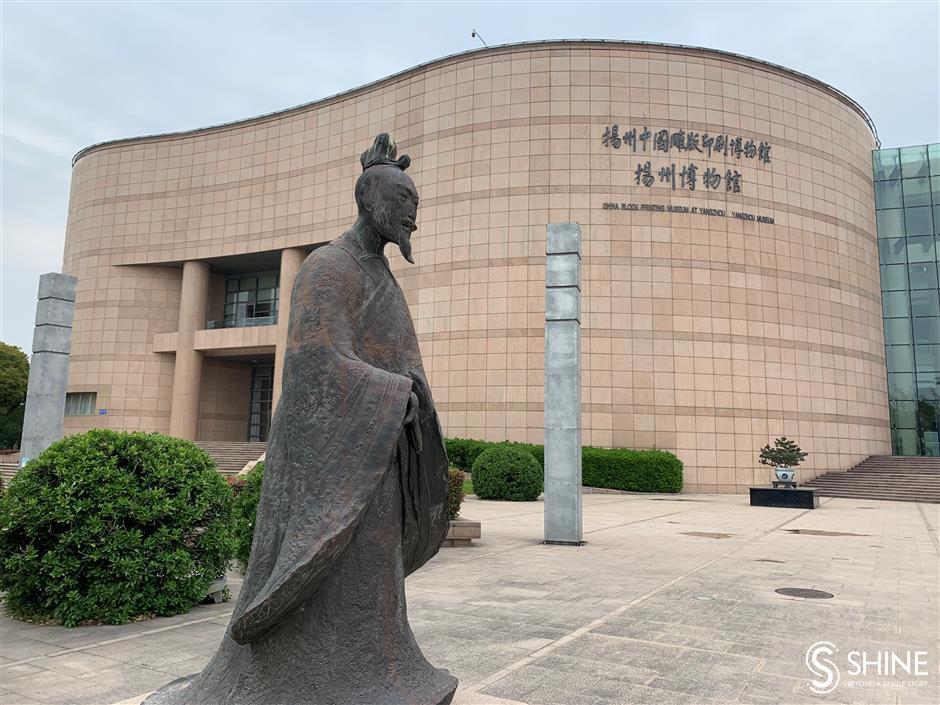 The Yangzhou Museum also sits by the China Block Printing Museum in Yangzhou.

Spacious and well laid-out, the three-story museum spans Yangzhou’s history from the prehistoric times to the modern age.

Carbonized rice grains, dog bones and boar skulls on display, which were dug out from the Longqiuzhuang ruins in 1993, prove humans had settled in the area in the Neolithic Period (around 10,000-3,000 BC).

The city started to take shape in the late years of the Spring-Autumn and Warring States Period (770-221BC) ruled by Fuchai, King of the Wu State, who was marching north to conquer more states.

Heavily militarized and called Han City at the time, it was the center of metal smelting with advanced casting techniques.

The museum exhibits various weapons including bronze swords and bows dating back to more than 2,000 years.

Although rusted and eroded, the blades are still sharp today.

Yangzhou’s heyday was under King Liu Bi during the Han Dynasty (206 BC-AD 220), who ordered the development of mining to cast coins and using seawater to produce salt, which greatly boosted the economy.

The abundant relics discovered in the Han tombs reflect the strong national power at the time.

Beautifully-carved bronze mirrors, incense stoves, and statues of servants show the tomb owners may still lead a wealthy, extravagant life in another world.

And they might also be environmentalists. One bronze lamp was designed with two smoke tubes at both sides, which made the wasted smoke from the burning candlewick go back down to the bottom container and get diluted with the water.

The device worked to largely reduce the indoor smoke pollution.

It may be unnerving to see the glazed glass overcoat sewn with copper threads, as it lies down like a dead body in the dimly-lit room.

A glazed glass overcoat is a sign of a senior noble man or woman. According to the law of the Han, there were strict distinctions for different ranks to use threads on the burial clothes — gold threads for an emperor, silver for vassal kings and copper for an emperor’s sisters. The overcoat with copper threads, excavated in 1977 in the Ganquan area of Yangzhou, suggests the tomb owner was probably a royal cousin.

Neatly drilled, threaded and finely polished, the burial overcoat shines with a silky luster in the darkness, showing the high-level glass-making skills of centuries ago. 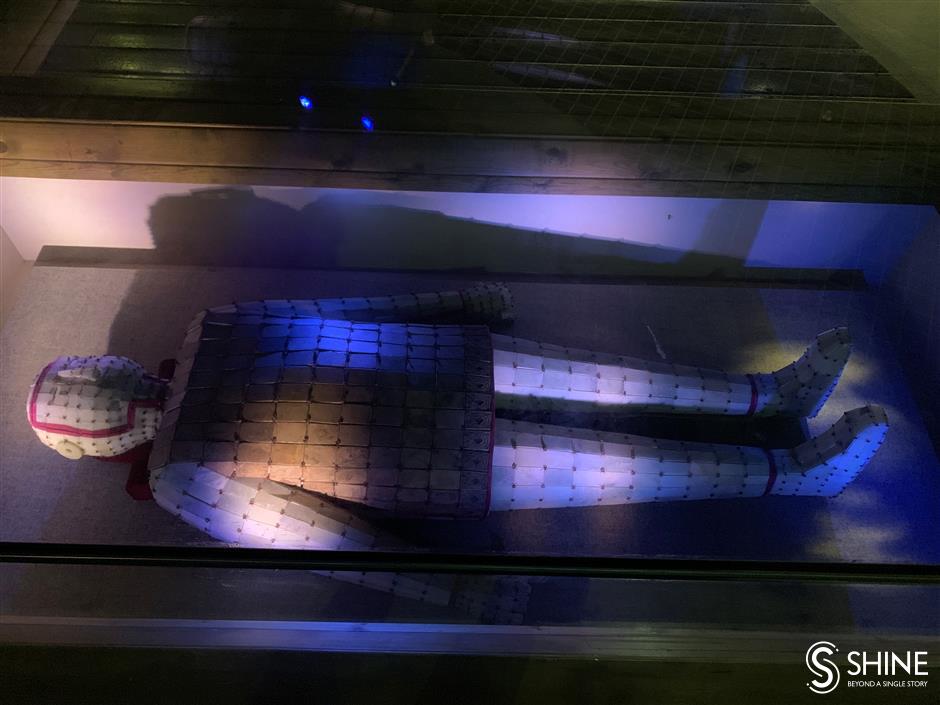 The glazed glass overcoat sewn with copper threads on display suggests the tomb owner was probably a royal cousin.

The Sui emperor, Yang Guang, ordered the creation of the Grand Canal that ran from the north to the south, past Yangzhou, which turned the city into a big busy shipping center.

The emperor Yang traveled to Yangzhou three times and was killed by the rebel forces.

He was buried in the city.

In 2013, his tomb was found, one of the biggest archaeological discoveries in recent years.

Among these precious relics, a set of gold and jade belt with 13 rings is of the highest rank all ancient belts found in China so far.

Two teeth in one tomb were verified to belong to a male aged about 50. It’s reasonable to assume they may be the teeth of the emperor, as he died at the age of 49.

In another tomb, there were remains of human skeleton, a 56-year-old woman, 1.5 meters tall.

After a comprehensive analysis of the tomb’s shape and burial relics, as well as the historical documents, the tomb’s owner was identified as the Empress Xiao.

Displays include three colored clay Zodiac statues: the rooster, monkey and horse. With animal heads, they were dressed in long robes, chest high, and each holding fist as a salute. With the belief in reincarnation, 12 Zodiac animals were buried together as the guardians with the dead person, who would find their way back to life under the protection of the Zodiac animals.

The gray statues of monks with distinctive high noses, clearly from Western regions, suggests that Yangzhou was an international city at the time.

In fact, with its abundant waterways, Yangzhou was a meeting point on the ancient Silk Road and the Maritime Silk Road. A large map shows the journey of adventurer Marco Polo, who started from Venice to China and then home again. 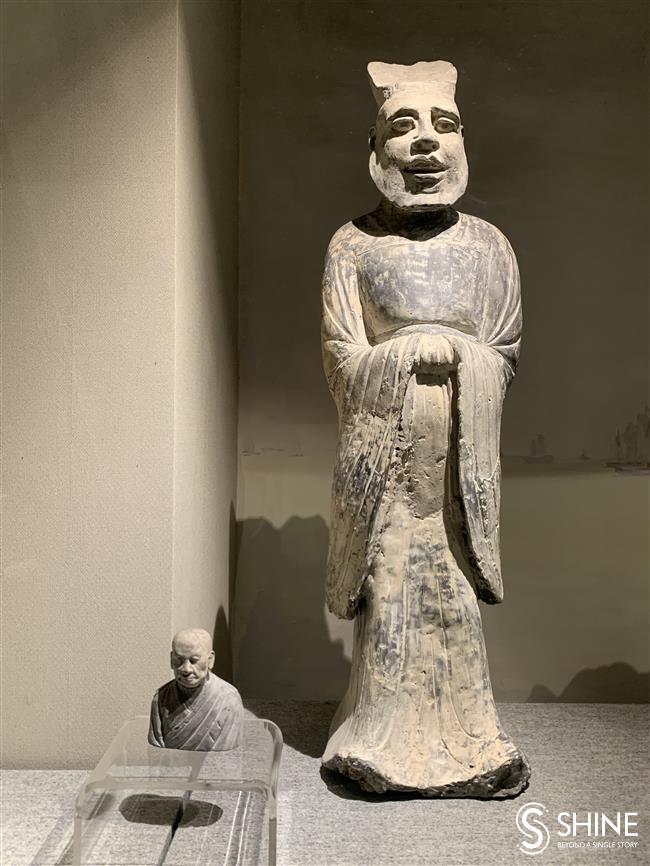 The monk statue with distinctive high noses, clearly from Western regions, shows that Yangzhou was an international city during the Tang Dynasty (AD 618-907).

He wrote in his travelogue that he lived in Yangzhou for years and even worked as an official in the city for a while. But there are no historical documents to support that.

In the late Ming Dynasty (1368-1644), Yangzhou went through a 10-day massacre, which killed about 800,000 people, and the general Shi Kefa led his troops to fight till the last minute.

His tomb is protected and worshipped elsewhere in the city.

After that catastrophe, Yangzhou survived and thrived in the Qing (1644-1911) as a national salt trading hub.

At the same time, its handicraft industry was blooming. From fans and carvings of ivory, wood and gemstones to furniture, jade statues and ceramics, the museum is also a treasure trove for art lovers.

The most valuable item in the collection is a vase with patterns of a white dragon with a dark-blue glaze dating back more than 700 years.

The vase was named a National Treasure by the China Heritage Commission in 1992. A priceless piece today. It’s said the former owner once visited the museum to see it.

Only three such vases are found and handed down from ancient times. The other two pieces are kept at the Summer Palace in Beijing and the Guimet Museum in Paris. But the one in Yangzhou is the biggest, most intact and with the most exquisite patterns. 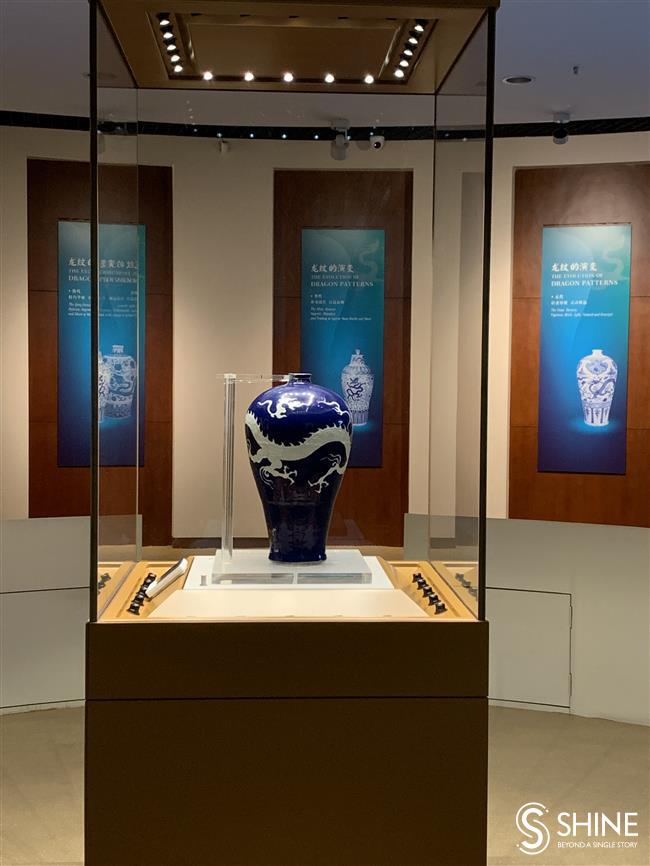 The museum’s most valuable item is a vase with patterns of a white dragon with a dark-blue glaze, dating back more than 700 years.