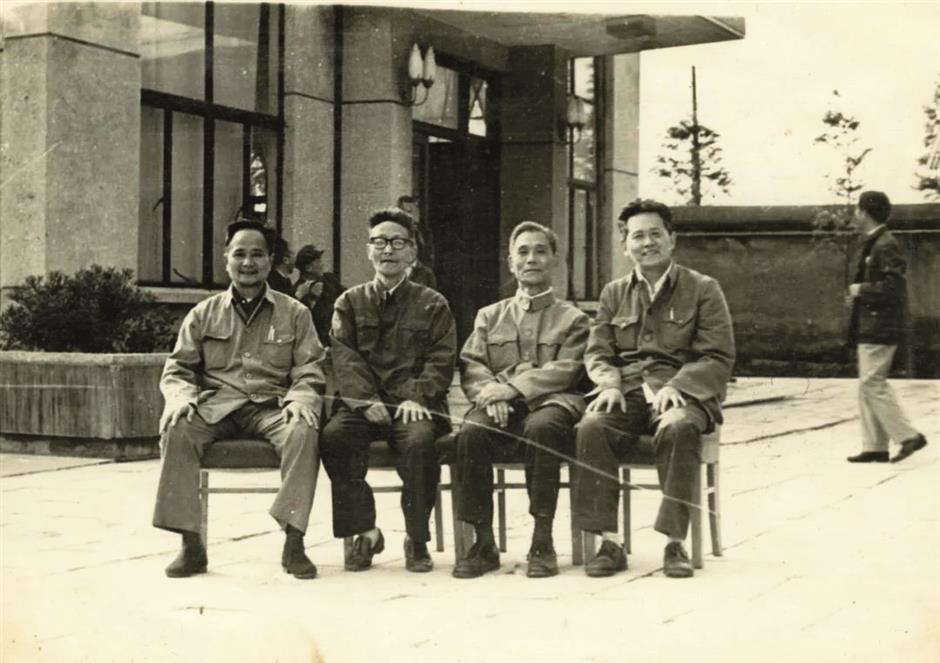 Xi (second right) and his colleagues

Xi Tianran, a Communist Party member in Songjiang, used to serve as an underground agent disguised as a grocery store owner for eight years and his Party membership application, written using rice soup, showed characters only when the recipient applied tincture of iodine.

Xi was born in the district’s Huayangqiao Town on August 5, 1919. After graduating from a normal school, he was appointed headmaster of a local primary school.

Then the Chinese People’s War of Resistance Against Japanese Aggression broke out in 1931.

In 1939, Xi, fighting against a fate of being reduced to the slave of a foreign power, decided to travel alone to Yan’an, a city in northwestern China being used by the Communist Party of China as its base. However, he was informed that the road leading to Yan’an was blocked.

In winter of the same year, Xi met former classmate Xiao Wang, who was already a Party member assigned to work in the eastern Songjiang area. Xiao became a guide to lead Xi toward the Communist cause.

In September 1940, Xi, then aged 21, rode a bicycle for more than 50 kilometers to submit his Party membership application. Due to the hazardous political situation, the application paper was written with rice soup. The Chinese characters on it disappeared when the writing dried and the recipient had to apply tincture of iodine before being able to read it.

In November the same year, Xi’s application was approved and he was assigned to work at a liaison station in eastern Songjiang.

In March 1941, the CPC’s branch in eastern Songjiang was set up and Xi was appointed as its secretary.

Soon afterward a grocery store opened in Huayangqiao Town. On the surface, it might have appeared to be an ordinary mom-and-pop store. But actually it was a secret liaison station of the CPC’s underground agency. Its owners were Xi Tianran and his wife Wang Hua. Once in a while, mysterious customers would appear at the store. They paid their money, received their packs of cigarettes, then disappeared. Notes bearing confidential information were exchanged in this way.

The husband and wife, while managing the liaison station, not only tried their best to hide the secret work, but also helped arrange dining, accommodation and travel for other Party members. Their roles as underground agents lasted for eight years.

An accidental event exposed Xi’s identity and he became a man wanted by the Kuomingtang party.

Xi used the pseudonym “Lu Ming” to join the battle against the Kuomingtang and Japanese invaders.

It was not until in 1949 when Songjiang was fully liberated and Xi was appointed as the first township governor and chief of the local public security officer in Huayangqiao Town that people in the area suddenly realized he was a Communist Party member.

In September, 1949, the first session of the first CPC people’s representative meeting in Songjiang was held at the local Qiujiawan Cathedral with 286 representatives present.

“I was so glad that it was the first time we held our representative meeting in dignity. Before, we had to work underground,” Xi recalled during an interview.

On the founding day of the People’s Republic of China on October 1, 1949, Xi listened to the event on a radio with tears welling up in his eyes.

After retirement, Xi worked as an after-school mentor for some local primary and middle schools.

He died at the age of 96 while he was watching a military parade on TV when Beijing was celebrating the 70th anniversary of the success of the Chinese People’s War of Resistance Against Japanese Aggression. On his deathbed, his wife adorned him with a souvenir badge which the Central Committee of the CPC, the State Council and the Central Military Commission awarded to war veterans.