Melodies from an ancient flute still strike a chord centuries on 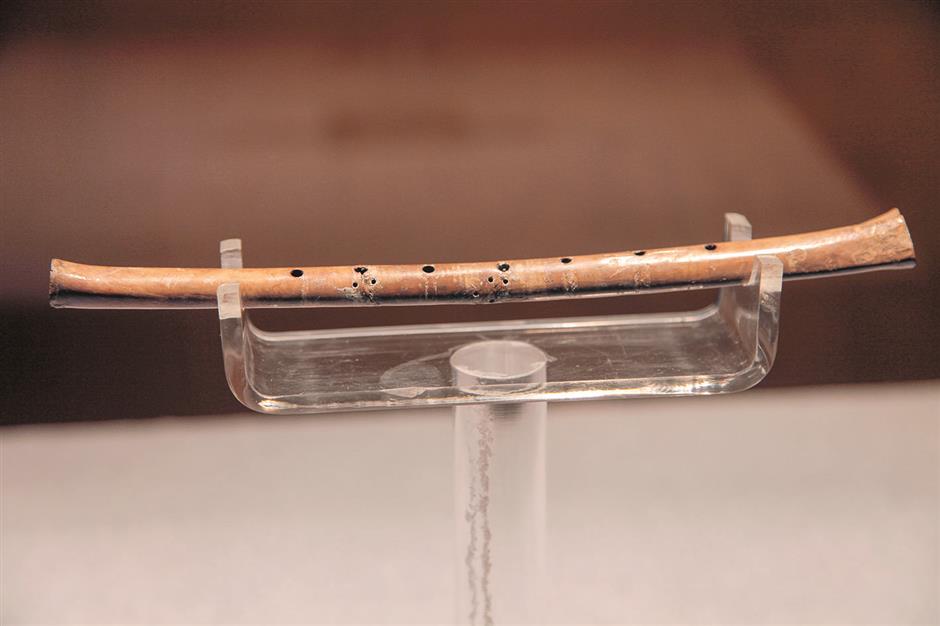 Dating back 7,800 to 9,000 years, gudi, or bone flute, is the oldest known Chinese musical instrument, as well as the earliest known wind instrument in the world.

For many musicians, instruments are so priceless they are treated as family members. A Neolithic man who was not necessarily a musician was buried in a tomb in Henan Province with his musical “family member” even though it was broken.

The musical “family member” is a gudi, or bone flute. Dating back 7,800 to 9,000 years, it is the oldest known Chinese musical instrument, as well as the earliest known wind instrument in the world.

The bone flute was unearthed at the Jiahu archeological site in the village of the same name in Henan Province.

The site was first discovered by Zhu Zhi, an official at the local cultural center who arrived to do manual labor in 1961. He found pottery sherds, human bones and traces of burnt soil in the village.

The site wasn’t officially excavated until 1983. The experts believe that Jiahu site is associated with Peiligang culture, Neolithic culture in the Yiluo River basin. The culture is named after the homonymic site was discovered in 1977.

Apart from the bone flute, Jiahu site is also known for the earliest domestication of pigs and rice in China and the earliest fermented beverages in the world. From 1983 to 1987, a total of six excavations were conducted.

In the fourth dig starting from March 1986, the archeological team led by Zhang Juzhong found three bone flutes with seven sound holes each. It was the first time that bone flute had been discovered.

The archeological excavation continues in the 21st century and more than 30 bone flutes have been unearthed so far.

In the first six discoveries, a total of 25 bone flutes were unearthed, including 17 complete ones, six broken ones and two semi-finished ones.

Among the 25 bone flutes, a semi-finished flute was found in a pit and 22 flutes were unearthed in 14 tombs, of which 13 occupants were adult men and only one occupant was a woman in her 30s.

The bone flutes are crafted from the wing bones of red-crowned cranes.

One of the bone flutes is displayed at Henan Museum and listed as one of nine highlights of the museum. It was unearthed from the tomb numbered M282.

It is the largest tomb with the most burial goods at the Jiahu archeological site. A total of 60 burial objects were excavated there, including pottery, stone objects and teeth artifacts.

Experts assume that its occupant was a man in his mid-30s who held a special position in the tribe.

Two bone flutes numbered M282-20 and M282-21 were found in the tomb. They were placed at two sides of his left femur. “The two bone flutes are made of the most delicate bone material, the most exquisite craftsmanship, the highest technical level and the most beautiful tone,” said Zhang.

The bone flute collected at Henan Museum is M282-21.

It was found broken into three parts when it was unearthed.

Although the bone flute was broken, its owner was not willing to throw it but drilled 14 small holes and used thin threads to join the pieces.

They have almost the same fundamental note, which was extremely difficult to do without the help of scientific instruments at that time.

Experts found that there were several useless holes that didn’t penetrate the bone on M282-20 probably because the placement of the holes on M282-20 didn’t conform with that on M282-21.

The renowned flautist Zhao Songting (1924-2001), dubbed as “The King of Flute Performance in Jiangnan (regions south of the Yangtze River),” was invited to play the bone flute when they were discovered.

He later made a replica and planned to perform on stage but passed away in 2001. His student Tang Junqiao, professor at Shanghai Conservatory of Music, followed in his footprints and replicated a six-hole flute from the No.253 tomb of Jiahu archeological site with the help of flute maker Wang Jianhong.

The replica mainly made of resin and bamboo was played by Tang in the crossover performance “Heavenly Tune of Chinese Flute” in the Shanghai Spring International Music Festival in 2018.